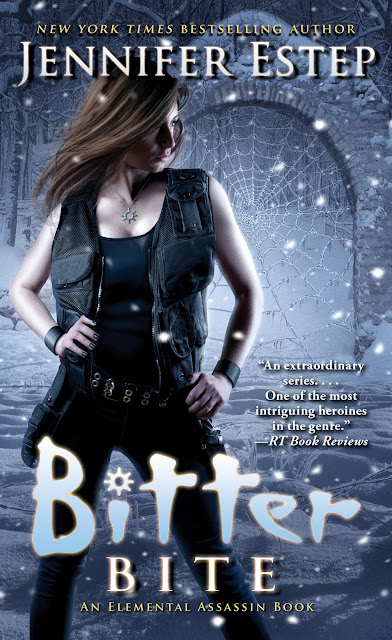 She’s not very good at it. And definitely not a fan. Sometimes it’s easier when you just have to stab someone in the face.

I said in my last review of an Elemental Assassin book that this series has become very very formulaic (not bad, because I love the formula, but still) following the same basic pattern

Gin: *cooking BBQ*
Big Bad: Rawr, I am big bad and will control all Ashland and it’s improbably huge crime rate despite the Spider’s habit of stabbing everyone in the face which would suggest I’d be better off going somewhere else.
Gin: I will find you Big Bad and stab you in the face!
Big Bad: no because I have awesome powers! Super duper rare awesome powers like the last 10 face-stabbed people who tried this.
Gin: Oh no! *is captured/tortured/despairs*
Gin: Wait, past 50% of book! Escape time! See you, Sugah, bless your heart, belatedly remembered southernism. And I remember I have super powers! And Awesome friends!
Awesome friends: Yo!
Jo-Jo: *Cure Major Wounds*
Gin: Now I stab you in the face!
Big Bad: Aaaargh *is stabbed in the face*
Gin: *Makes dinner*

When I finished this book, my first thought was that we’d finally broken the pattern! And then realised that I was being, perhaps, a little optimistic there. I mean we have deviations but that same basic is there – super powerful enemy appears, we have the original set back and then the come back of awesome

So, it’s not exactly not following the same formulaic pattern. And a lot of the twists – with Deidre being Finn’s long lost mother, are somewhat repeating the same patterns we saw when Owen was dealing with Salina (which the book even gives a nod to).

However, while there are a number of similarities still, the pattern itself is disrupted by a whole lot of revelations towards the end of the book. And the introduction of a new big bad. Ok, since Mab Monroe died there have been a number of big bads brought in to replace her (including her daughter) and has followed the same pattern only briefer. But this book introduces an antagonist that is a concept, an organisation rather than a big bad scary elemental who is scary because of their big, bad scary powers. More, this affects the whole structure of the city, everything that Gin has done and everything she is part of.

In general, it feels like this book is bringing in a series reboot, a different focus and a change from the current pattern of repeated powerful one shot enemies. While we have a lot of similarities here, we can see the change of direction – we’re going somewhere new from here, or I hope so

And, like I said in my last book review, unoriginal doesn’t mean bad. That’s one thing that’s been hard in these reviews, pointing out how very formulaic these books are while, at the same time, making it clear that they’re still good books, still a load of fun and still worth a read.

It also comes with a lot of personal examinations and the excellent shared history between the characters – including Gin and Finn. Because Gin and Finn were an already established relationship before the book series began, in some ways we’ve had less insight and examination of their connection than we have, say, with Bria or Owen and Gin. It was a nice addition.

I’ve also noted a few interesting link ins with the Black Blade Series. In some ways I appreciate this because I like large, multi-series worlds, but I’m not sure it works – the magic, the creatures, everything is so different between the two series, I’m not sure they can be smooshed together into the same world setting.

This series continues to have a number of powerful women – with Bria and Sophia and Jo-Jo clearly preventing Gin from becoming an Exceptional woman. But this is the second book where a woman someone competing for one of Gin’s men’s affections has been evil – but then we do have Bria and fin in a relationship so we can’t say it’s a pattern. One sour note on the depiction of women is how Deidre basically gained sympathy by lying about being abused – something Gin and Bria didn’t believe for a second and knew instantly was a ploy. The whole idea of a woman being abused being a ploy for sympathy (whether she has actually being abused or is lying about it) is a dangerous and toxic trope that down plays the severity and prevalence of intimate partner violence. Equally, the idea that women lie about such abuse to be manipulative is a really toxic meme.

Diveristywise, we continue to be poor. There are some background POC (playing very minor roles), but the only recurring POC in this book are Xavier (very very briefly seen – and Rosalyn is absent) and Silvio (again, playing a relatively minor role as Gin’s assistant – he’s a walking to-do list). There are a lot of people in this world – and the city, while it doesn’t actually exist, is set in the American South. You would expect a lot more POC in this series

Silvio is also gay – well, if you’ve read several books ago where it made that clear. Many books ago. For one line. This is pretty damn non-existent as far as inclusion goes.

In all I’m left very hopeful by this book. Not only do I really like this story and this series (which are both an extreme joy to read) but I think this is definitely a turning point. This series is heading to a whole new direction which I’m really eager to follow; it was in a rut but it’s breaking out of that and creating a whole new setting. This is going to be interesting and just what this season needs.