Beowulf: Return to the Shieldlands, Season One, Episode Nine 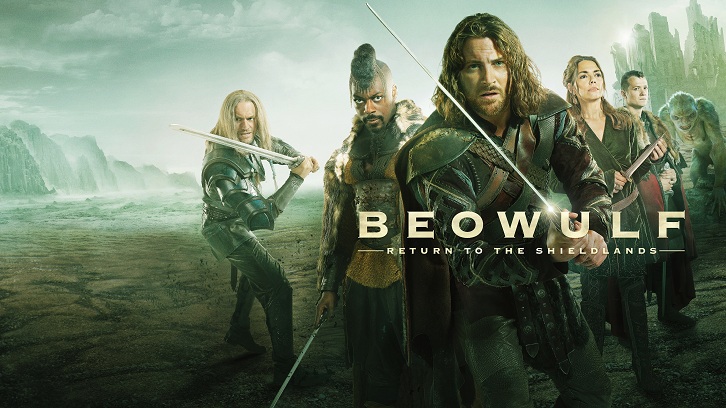 The mud born have been pushing to get their land back from the invaders.  From early on this season, Beowulf: Return to the Shieldlands there has been a lot of examination of colonialism and this episode is no different. The huscarls come across a human who claims that he was kept captive by the Warig and though they lose one of their men, they bring the man back with them to Herot completely unaware that they are bringing the leader of the mudborn into their territory.  After having killed Koll, a shifter living in hiding in Herot, one would think that this would make the Huscarls at least  a little bit suspicious of strangers but apparently this is not the case. Nothing like letting the enemy have a look at your defenses I suppose.

This week, Beowulf: Return to the Shieldlands laid it on pretty thick. It seems as though the mudborn have a chosen one whose birth was foretold. This chosen one will supposedly unite all of the mudborn and defeat the humans, chasing them from their land. Given that the humans are invaders and that they've slaughtered them at will, defiled their holy places and enslaved them, it's hard not to be team mudborn, though Beowulf: Return to the Shieldands is trying to suggest sympathy for both sides.

We finally got a little bit of Beowulf's backstory this week when he and Elvina are captured by the Warig. It seems that while Beowulf went to hunt down some escaped Warig prisoners, the Warig doubled back and slaughtered his wife and child, burning down his home. He clearly feels that all Warig need to die, missing the point that had the humans not invaded, murdered and enslaved perhaps his family might still be alive today.  I don't really expect much nuance from Beowulf at this point given that from what we have seen of his investigative skills  he's not necessarily the brightest person around.

For much of this season of Beowulf: Return to the Shieldlands, there have been plenty of clues that there's more to Elvina than meets the eye. When she is forced to reveal that she is a shifter in order to save Beowulf from being burned alive by the Wharig, I cannot say that I was surprised.  With all of the hinting the big reveal felt anticlimactic. Throughout most of the episode, Elvina kept stressing the value of all life, something that Beowulf clearly didn't agree with. With her big secret exposed, Beowulf finds that while he cannot kill Elvina, he can no longer see her humanity and demands that she stay away from him and never ever return to Herot. The moment when he tells Slean that Elvina is dead represents his absolute rejection of her.  His failure to see the bridge that Elvina could provide is a stunning example of how small minded Beowulf is and why the conflict will continue to rage. For a better examination of colonialism, Beowulf: Return to the Shieldlands needs to pull away from Beowulf's perspective.


People are still bristling under Rheda's rule, even after she explains that the smelters will leave and trade with the Varni if a set price is not established.  Rheda is forced to choose having men come to her aid of Herot is challenged, over enforcing the laws that she has written.  It seems that the people are more interested in being able to control their capital exchange than marshaling their forces to build things like bridges and roads to increase the security for them all. Rheda bristles but there is little that she can do with her back up against the wall.

With the danger looming the people of Herot are no longer willing to sit by the sidelines and hope the Huscarls defend them.  Because being a Huscarl gives one social power and access to both Rheda and Slean, it's a position they don't want to give up and they use their own supposed superiority to justify not training the common person.  Vishka and Lila however will no longer be denied and threaten not to make any more swords for the Huscarls. Lila points out that the forefathers of the present Huscarls weren't born into this position but earned it through bravery and therefore the common people should be given the same chance.  When this doesn't work, Lila punches a Huscarls in the stomach and predictably he crumbles.  Finally, the Huscarls consent though they are still dubious about training the people.

This week, Slean as the leader of the Huscarls is forced to wash one of their dead as part of his duty as their leader.  He is joined by his wife.  Though Kela and Slean have yet to consummate their marriage, it's clear that they are discovering that they are of like minds and are becoming closer.  This can only be a good thing for Slean because she is the brains to his brawn.  I do however wonder what effect the lie that Elvina is dead will have on their relationship?  Rheda can only think about what kinds of fear this will cause her people, and completely dismisses the fact that Slean loved Elvina and might well blame Beowulf for her loss.

Finally, Brecca has returned to Herot to warn them of Abrecan's betrayal but first he must confront Lila.  Brecca is loathe to even make eye contact with Lila and attempts to have Vishka return the blood money to her mother.  Brecca is clearly ashamed of having his secrets laid bare to all of Herot and how he may have hurt Lila.  Once again, it's worth pointing out that thus far, Beowulf: Return to the Shieldlands has done nothing to portray any possible blooming love between Lila and Brecca. I don't understand why she worked so hard to save him at all. Not finding a warm welcome in Lila's embrace, Brecca heads off to attempt talk to Rheda, after finding Beowulf missing only to be turned away.

There are only four episodes of Beowulf: Return to the Shieldlands left,  and I cannot help but wonder how ITV feels about the bomb they have created. It keeps trying to build to something and ends up going absolutely nowhere.  I'm not invested in either the characters or the story.  All of the characters to date feel very wooden and two dimensional.  Even when we find out a little backstory, like that of Beowulf's wife and child, it all feels so perfunctory because Beowulf: Return to the Shieldlands just doesn't go deep. It has simply stolen a famous literary hero, tossed in some good cinematography and sets then hoped for the best. At every step of the way, the writing has let this series down.