Marked in Flesh (The Others #4) by Anne Bishop 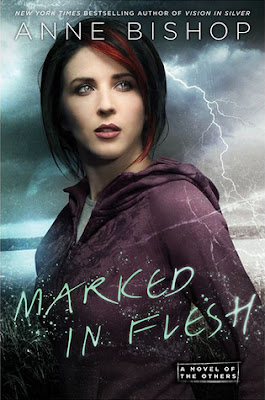 Things now rest on the knife edge, the Humans First and Last Movement is growing in power and popularity, attacking humans who don’t support them and continually provoking the Terra Indegene

This book is all about surviving, hoping for the best and preparing for the aftermath. It’s not even about trying to make it less bad – it’s past that – it’s all about getting ready to pick up the pieces.Wverything heading to a bad place and everyone is just trying to soften the blow. There’s no doubt here, the worry that has been brewing for several books has reached its peak: it’s too late to stop the disaster, the elder Others have been roused and people are going to die.

Which also is a personal question for Simon in particular as well – Terra Indgene are beings that imitate a predator and become more like them (so wolfguard’s ancestors saw wolves and became increasingly wolfish) – as he is more and more involved with humans how much of a human is he becoming?

Which also fits in part of the personal conflict with Meg who has excellent storylines of being the Trailblazer, trying to find a new way of living and surviving for the Cassandra Sangre like herself: trying to use their power to predict the future without it killing them. There’s also the personal story of her connection with Simon. Personally, I don’t think this book needs a romance, and I appreciate, at least, that it has been a very slow burn – but if it is going to be there it’s interesting some of the elements that they’ve added. Meg has been abused – physically emotionally and sexually – by human men; she actually views Simon’s increasing humanity as a threat and a barrier

The conflict facing the human characters is how to convince the ignorant and entitled Humans First and Last Movement demanding more and more from the Others despite the repeated warnings they’ve received. There’s lots of conflict of these humans desperately trying to placate the Others and being victimised themselves for being “Wolf Lovers”. There’s a lot of uncomfortable and difficult moments with the Others, especially the wolves, being furious with humanity for just reasons and these humans being caught in the middle, sympathising while also trying to point out some of them are trying to stop this. It’s messy and has no good ending – which is kind of the underlying theme of this book

All of these is bleak and grim but comes with a nice heavy dose of humour as well which so defines this series. The joyous confusion of the Others trying to understand humanity, especially The Meg. This light, hilariously confusion is an excellent addition to ensure that everything isn’t so grim.

The world building of this series is fascinating and pretty unique. We have a lot of book series out there where the supernatural hides out of fear of the vastness of humanity – but this is one of the few where it is the opposite. The supernatural are vastly powerful who tolerate humanity’s presence. This book also lets us see how this works in different lands with the people of Cel-Romano giving gifts to their “friends in the woods” which is a nice take on old superstitions of leaving gifts out to, for example, the fae and other local supernaturals in different parts of Europe.

This book, this series, raises a lot of interesting questions and points about what “using the land” means, especially when we consider how truly frivolous a lot of our uses are. The Humans First and Last Movement talk about exploiting natural resources which they say are being “unused” but the Others point out, strongly, that the land is being used. It’s being used by beings to live, for food, shelter – it’s their homes. And all this talk of “proper use of land” is really exposed when you realise that part of the land under-dispute is desired for gold – and can there be a better skewering of “proper use of the land” when land used for food and water is torn up for the sake of decorative metal?

The whole concept of the humans demanding the land of the Others really skewers the ideas of entitlement we see a lot in politics, both past and present. It addresses issues raging from colonisation to resource exploitation. Only with the beings been invaded being vastly more powerful and quite able to viciously oppose the entitlement. Which is actually some of the problem.

This book is not set on Earth, but it is a clear Earth Parallel – it even says as much in the explanatory notes. And Thasia is North America. We’ve said before how this is extremely problematic because it’s also a consentient that was completely uninhabited by humans before Europeans arrive. This is an alternate world where Native Americans have been completely removed.

But not only that, because the Terra Indigene – the Others – beings with animalistic and elemental traits who are all connected to the Earth and nature have not just been set up to occupy the continent instead, but also seem to carry many of the stereotypes of Native Americans – specifically the Native-American-crying-over-despoiled-wilderness cringeworthy trope. This was never subtle in the books (which have a very strong environmental message anyway as I mentioned above) but this book decided we need to shovel it in – complete with a scene of humans killing vast numbers of Bison wastefully, destroying food supplies for the Others. It’s an extremely clumsy appropriation of actual historical events, all repeated while completely excising the actual real life victims.

This links into how this series is dealing with things like entitlement, colonisation etc because while it raises a lot of interesting issues and exposes a lot of the terrible attitudes around these concepts, it also completely strips out the victims, the damage and the pain that underpin the true problems of these concepts in real life. In fact, since the power firmly rests in the hands of the Others who can bring about extinction at any time, it can even break it’s own message. Sure, when the Humans First and Last movement is complaining that they don’t get gold and resources… but what about when they talk about food and water shortages? What about the farmers complaining that the land they have has uncertain and difficult. What about the Others complaining about those immigrant upstart humans coming onto their land and then over-breeding? Because weaker groups being confined to certain, often less productive areas or powerful groups complaining about immigrants over-breeding and needing “culling”? That also has parallels. And I don’t think we’re not meant to see it this way, but the power disparity running the opposite way doesn’t make the colonisation narrative fit perfectly.

We do have some POC in this book – the most prominent of the “Police Pack” is Lieutenant Montgomery and probably the most important human after The Meg: he’s also joined by his daughter and his mother Twyla who is going to be a Force to be Reckoned with. I do think there is something of a trope out there of the no-nonsense, not tolerating any silliness, determined Black matriarch which Twyla fits in, though. Most of the rest of the cast is White, and I think this covers the description of the Terra Indigene as well.

I don’t believe we have any overtly labelled disabled characters per se, but the minds of the Cassandra Sange, the way they have to make accommodations for their abilities, the worries about overstimulation, not understanding their surroundings, anxiety and difficulty of communication certainly lend themselves to a non-neurotypical narrative. There are no LGBT characters in this series, sadly

This is one of those books and one of those series that I love – completely and unabashedly love. The world setting is amazing, the characters are excellent and hilarious. It’s original, the writing is excellent and every moment of reading it is a complete and utter joy. We always look for a new edition of the Meg and it always rockets to the top of our to read list when a new book is released. We love this book series – but, no matter how much we want to fanpoodle, there are problems here that have to be looked at.