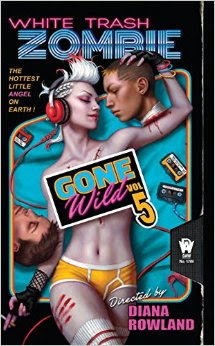 It’s a major hurdle to overcome, but she can’t focus on it alone – there’s a threat to expose zombies and the Tribe has its hands full with Sabaton’s plotting.

And there’s murder on her doorstep – which may be related to zombie hunting. It’s a lot to handle and there’s only Angel free to step up.

Have I mentioned how much I love this series? Because I really love this series. More surprisingly, I love this series for different reasons to why I love Diana Rowland’s Kara Gillian series (though both series are in my top 10 list). I love Kara Gillian because I love the world, I love the setting, I love the awesome, epic plots – I’m not saying I don’t love Kara as well, but the world and plot is amazing. While the White Trash Zombie Series I love primarily because of Angel – again, not that the world or plots are lacking, far from it. But Angel is such an excellent character and this book just continues Angel’s story

I think the first thing to emphasise about Angel is that she isn’t super. She’s a zombie, but no more powerful than the average zombie. She’s not stupid, but hardly super intelligent either. She’s physically capable but doesn’t have super strength or move in a blur of speed. She can handle herself, but don’t expect her to pull our ninja moves or shoot with deadly accuracy over vast distances.

Yet, despite that (or because of that), she is one of the strongest characters I’ve come across who has accomplished more and overcome more than most I’ve read. The very lack of epicness about her underscores just how awesome our White Trash Zombie is.

At the end of the last book I predicted Angel was going to have some problems with the zombie pharmaceuticals the Tribe is now producing – more, that she should have problems with them. She managed to overcome drug addiction when she became a zombie simply because she became a zombie – and with that became immune to the drugs she used to take, forcing her to quit. Now there are zombie pharmaceuticals, pharmaceuticals she uses, which are helpful and useful to her – and are addictive

Reading this can be painful. Because you know she’s making terrible decisions. You want to yell “no, Angel, nooooo!” but this is very much in character. One thing she’s been clear about from the very beginning of the series is that addiction is a terrible thing to wrestle with and she knew she dodged the bullet. Seeing her actually struggle with addiction this book is excellent – including how Dr. Nikas responds to her (excellently and with great understanding compassion and no small amount of guilt because he realises that by having Angel use the performance enhancing drug without any real thought of the consequences or her history he set her up to have addiction problems), how she has to work rough this problem, how hard it is and how proud she is of herself when she does succeed is all excellent.

I also like how Angel falls back into addiction – it isn’t a simple case of “oh yeah I want it.” She takes the drugs to both calm her anxiety and to help her control and manage her dyslexia while she goes to college. Like many people who become addicted to drugs, Angel begins by self-medicating to deal with low self-esteem, to treat her mental illness and treat her dyslexia – I like that this is included because we often miss some of the causes of addiction, preferring to present it as more a “moral failing” because judgementalism is always more popular

I also love Angel’s growing confidence in herself, now happier to go to rich people’s parties, happier to challenge Pietro with her own ideas, confident that her ideas do have value and are worth listening to. When people try to talk down to her and make her feel small, she is confident enough in herself to let it roll off her – because she knows her worth and doesn’t believe what they tell her.

There is also a big difference in the plot here – in that all the plot is Angel driven. She’s not being pulled into a plot line because she was attacked or targeted (or not exactly), nor because she’s following orders or following instructions from the Tribe or part of a larger organisation, nor is she struggling to survive. She could hunker down. She could wait for advice. She doesn’t – she takes control, she acts on her own initiative, she takes what help she can but also recognises her own abilities. This isn’t loose cannon charging off on her own, spraying Spunky Agency everywhere, this is a capable zombie recognising that they are very low on people at the moment (there’s a lot of things demanding the Tribe’s attentions) so she needs to step up and do her part. This book shows Angel stepping up as a member of the Tribe and making it clear “I’m a valued member of this group.”

The plot itself is fun, action packed and full of Angel making good choices and smart decisions, not getting everything right and having to adjust her positions several times but still rocking, moving with confidence and generally being awesome. I especially like her taking the initiative to trust and include people and having the confidence to do so, even though it meant stepping far outside the Tribe’s usual methods.

We have some POC in the story – Coy, one of the people caught up in Angel’s ex’s murder story is Black man. Rachel, one of the enforcers for the Tribe is a Black woman. We have a movie star present who is acting in a zombie film who is an Asian woman and one of her co-workers is Derrel a Black man. I mean, they’re there and they’re not stereotyped or trope laden… but that’s about all you can say about them. They’re just not there in any real meaningful or story changing manner. And the same applies to pretty much all women in the book (and I’m disappointed that Rachel is so antagonistic towards Angel because she may be the only female zombie I can think of). Justine (the Asian actress) and Angel get on and maybe they’ll build a relationship in future books, but at the moment Angel moves through a very male world and a largely white one – Allen, Dr. Nikas, Jacques, her father, the humans she allies with pretty much most of the main actors are all straight white men (and, yes, everyone in this book is straight).

It’s the part of the book review that always saddens me. Because I don’t want to do this – I don’t want to poke the lack of LGBT people or meaningful POC or female interaction because I want to just revel in the awesomeness that is Angel. I want to love this excellent character, her issues with her disability, class, addiction and how she has grown and developed and is just so very awesome and one of my favourite protagonists in any series I’ve read – yet that absence of meaningful POC and LGBT characters in a relatively large cast is not something I can ignore

I’m still going to fanpoodle the awesomeness that is Angel, that is this series and that makes Diana Rowland one of my favourite authors, I just wish I didn’t have to throw in the caveat at the end