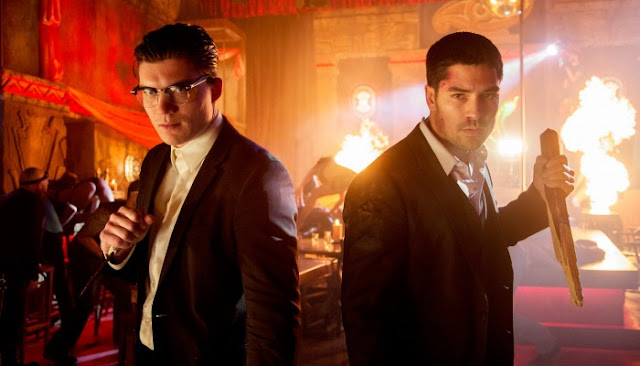 Last season, among the many many events, we had Carlos destroy the Titty Twister. And something crawled out of the ashes.

We also had a whole lot of death and destruction and Seth and Richie now finding a new place in Culebra society – specifically, Lord Venganza (aided by her assistant Ximena) has pulled strings and declared that Richie and Seth will be their “collector” – an honour she bestows after making it clear, no matter what Santanico said and no matter what corrupt lords they killed, that they’re still soooo far down the ladder. Some of the lords are not exactly being fans of the Gecko brothers.

Richie is honoured by this high office. Seth, much more grounded and much less given to listen to spin, knows they’ve been given a lower level goon-squad position. Tax collector, enforcer, even if it does come with Culebros minions.

The brother’s interacting here is pretty good – I like it. Last season had a whole lot of overdramatic family drama which, to be honest, I found unnecessary boring an over the top. Here we have the general but affectionate bickering that really sells them as brothers, overlaid with the very real issues they still have. Richie is still super invested in being a Culebras, climbing the ladder et al while Seth has no interest in being a vampire, views this as a job and makes it clear they’re not “his people”, much to Richie’s offence. Richie is really invested in the mythology and history and culture of the Culebros. It’s going to be an interesting conflict if the show can reign in its usual love of melodrama.

Anyway, after collecting tribute and money and making a nice living but, Seth’s very right they are acting as collection agents. Oh and Freddie the former Texas ranger is now acting as peacekeeper for Venganza as well.

Things don’t keep going smoothly when we get a new player – someone who terrifies Venganza. Calavera – a demon. Yup, that world building just exploded everyone!

This demon pulls people’s skulls out of their head (without leaving a mark and then turns them into mind controlled minions. This does make them sort of detectable – if you shoot them in the head they die (they explode, because this is From Dusk Till Dawn and it loves its gore). This sounds like a terrible way of discovering spies, except when you remember that Culebros, generally, do survive being shot in the head. Though they’re really really not a fan of it.

We have some more Gecko drama, again well done, with Richie definitely onside to take on the new threat while Seth votes for “hey we’re the hired help and demons aren’t in the job description” route.

While Venganza is duly freaked out and calls on her other lords, Richie and Seth decide to see if their organisation has been infiltrated by putting down plastic sheeting and shooting people in the head (forward planning saves clean up!). Calavera is a crafty guy though and sets up minion #1 against minion #2 to prove minion #1’s loyalty and let Minion #3 steal some shiny bling from Richie’s random shiny safe. Please, the Geckos were not born yesterday and saw this coming a mile away – they don’t stop the bling being taken but some gun fights and bombs later, kill Minion #1 and follow Minion #3 to Calavera’s creepy skull covered lair

Alas, their new errand boy also dies. That’s a shame, I think it was kind of amusing seeing Seth and him bounce off each other

There they reveal Calavera’s master plan (beyond looking super creepy). He’s shown up to put the wind up Venganza so she will call all the lords together in one place, with her bodyguards (now all Calavera minions) who will then slice and dice all the Lords at once.

It’s a good plan – Richie and Seth intervene and manage to destroy the bodyguards by destroying their stolen skulls – and they kill Calavera with very unsafe bonfire management. But, damage is done and every lord but Venganza is now dead. Ominous

Of course part of this is because Calavera isn’t the only demon on the scene, we also have Basra: demon of sunglasses and black leather

So what’s with all the demons? Turns out the Titty Twister, in addition to being a strip club, temple, blood font and treasure trove with mystical labyrinth of doom/transcendence in the basement also has a big demon cell in the sub sub basement. When it blew up, all the demons got out – which suggests a whole lot more to come.

More, as Venganza points out, Culebras society has never existed without lords before. They do not know how exist without them… just as they are most under attack

Oh and Basra finds the necklace Calavera stole and gives it to… Kate. Yes, Kate. She’s still alive, she’s had one hell of a make over and Basra seems to be scared of her.

I said I was looking forward to the next season when thelast season ended – and I’m doubly sure of that now. The widening world, the full transition away from the source material to make this so much more of its own storyline as well as, so far, a coherent central storyline without everyone doing their own thing or so much confusion promises for a much more focused exiting and fascinating show. It always had the underlying bones of something truly awesome and this season may be bringing it home. I’m excited and intrigued.

Ok, can I just say that with all this praise I also have to call a little bullshit on Venganza having a rank 6 conniption fit over Calavera being out there about to kill them all? Because the Geckos hit on an unpleasant but pretty much fool proof way to detect and take out a Calavera minion, all you really have to do is stop your guards wandering off alone to have their face rearranged and in the end it took one Culebra and one human wielding fire to actually kill this demon. A major threat he was not. I think perhaps this was a minion which would have had much more spooky potential (you can’t trust anyone!) if we’d let him brew a few episodes. Maybe this season’s flaw will be being too fast paced. After all, such new revelations require a lot to digest not run through

One of which may be Seth's sudden redemption storyline... I think it's a stretch to call that an interest of his in previous seasons - but confronted by the supernatural, demons and hell I think it's reasonable for Seth to start considering faith, morality and his own soul as well especially if he's not embracing immortality. But this will be poor if it is rushed