Killjoys, Season 2, Episode 10: How to Kill Friends and Influence People 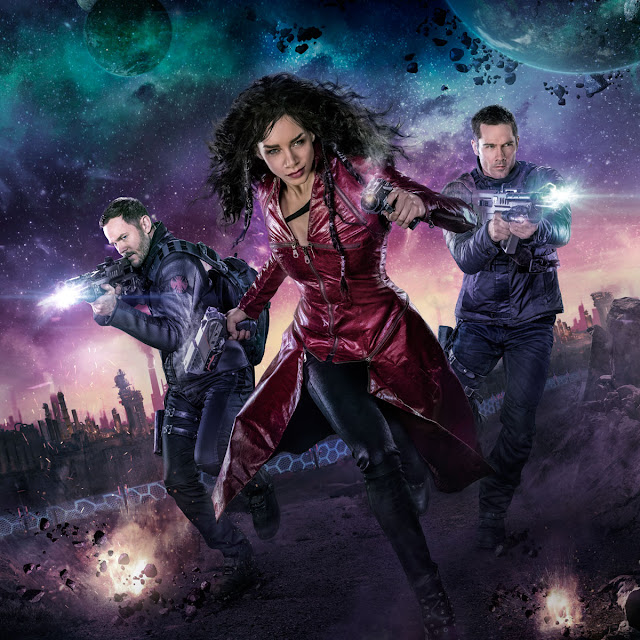 Noooooo, it’s season finale time already?! But but but it just started?! Oh why do shows like Vampire Diaries go on like a bunch of Duracell bunnies in a love triangle, but these awesome shows end so quickly!?

We start this last awesome episode of this last awesome series with some excellent exposition to that mysteries that have continued through this season – provided by Khlyen and Fancy now joining Dutch and crew and Khlyen’s new anti-plasma toxin he has (and helpfully removes the Black Root who had found them).

So – this explanation. Way back in the past Khlyen and his daughter Aneela the Dutch doppleganger found the plasma which they intended to end hunger by using it to produce super crops – which it did. Then they found out it possesses people because the plasma is sentient, known as the Hollen. And, yes, Khlyen is one of these Hollen people – so are all the immortal Sixes. Unfortunately, as we learn later in the episode, the Hollen-ness is not good for developing minds and Aneela became insane and universe-conquery with it.

Ok, insert here – can we not? Can we not with the idea that insanity = violent or insanity = dangerous because mental illness very very very rarely means any of those things. One of the most destructive tropes about mental illness out there is that the mentally ill are dangerous.

Have her be power hungry. Have her want to destroy the universe and be its empress. You don’t have to be mentally ill to want to Control All the Things.

Adding to this Khlyen reveals that many centuries ago the Hollen went to the 9’s ancestors and offered them a choice. Choice 1: prepare for assimilation over a few centuries where you get really rich and powerful. Choice 2: you will be squished

Unsurprisingly, the 9 went with choice 1 and they’re preparing for the handover now – which including all of Delle Sayah’s planning this season, it’s all to get ready to hand over to their Hollen overlords; and she wants to be one of them hence her working for Khlyen.

Khlyen now has some super toxin that kills plasma (which he used on Black Root) which they can use to destroy all the plasma. This will mean that Aneela will have no reason to invade the Quad because all she wants is more plasma and plasma infected people. Not by going to Arkhen – but by finding the “parent plasma” which was originally used to grow a tree back in Khlyen’s feed-the-world stage. If they destroy this, they destroy all the Quad plasma and Aneela won’t invade. Kill the Plasma Tree, Save the Quad

Doesn’t quite match “Save the Cheerleader, Kill the world”

So the super bank – this involves Trick from Lost Girl (because Trick is awesome) – or rather Serafan. He’s the bank manager. We get lots of fighting scenes with Johnny being in an awesome ship fight with a snarky Lucy. We have an awesome firefight with D’avin, Fancy being used as a human shield and a whole lot of snark. And Khlyen and Dutch slaughtering guards hand-to-hand while Serafan drinks tea. He drinks tea! It’s awesome! And snarky!

They find the tree and get some more world building: what Khlyen was up to. He has never really agreed with Aneela’s invasion fantasy. As the first gen Hollen they maintained some level of autonomy rather than the mind controlled sixes (which are a creation of Aneela’s Red 17 experiments). Khlyen was very concerned that Hollen-ness was inevitable – so everything he did with Dutch was to try desperately get her ready to be a fellow autonomous Hollen. Since, for reasons still completely unknown, Dutch looked exactly like his daughter Aneela and he clung to her as some kind of redemption arc. Until D’avin provided the key to destroying plasma with his weird plasma destroying powers

Yes he’s always cared and we get the most poignant of goodbyes when Khlyen has to sacrifice himself to destroy the plasma. Yes, Dutch will miss him – but destroying the parent plasma destroys all the plasma on Arken and any sixes – included Fancy – become human again.

They’ve won and it’s all super dramatic after all the awesome fighting, exposition and snarking. It’s awesome.

And we have the emotional denouement

A perfect part of this is Johnny excellently unpacking Dutch’s feelings about Khlyen. You can miss someone without forgiving them. You can love someone you hate. Emotions can be complicated. I love it and I love them together

Which is kind of sad when we get the really big emotional surprise. Saying he needs time alone due to grieving over Pawter, Johnny goes to a meeting he’d tricked Delle Sayah into… and shoots her. In cold blood. Not because of the people she killed, not because she was willing to enslave the quad – but because she killed Pawter. He’s not a hero, but he has his revenge

Johnny, sweet, idealistic, caring Johnny killed someone for vengeance. Ouch it’s heart breaking. And the more heartbreaking when he decides to leave so the consequences for this don’t affect Dutch and D’avin… and Lucy tries to stop him. And they say goodbye. Yes a goodbye between Johnny and a shop and it is so very very sad.

He’s running off – but not alone, because Lucy has called Clare in to be his wingman. Since she was awesome, I’m all for this.

Meanwhile, Dutch presents D’avin and the now-human-and-not-entirely-loving-it Fancy (I’m really glad he survived, as an aside – because having the plasma purge kill the Sixes would have also made sense) with some options. Aneela won’t invade the Quad now, so they can step out, retire and relax… and hope Aneela doesn’t come back later. OR they can go out there and stop Aneela invading the rest of the universe and win the war not just a battle

Guess which they choose? It’s going to be awesome

Alas, it’s also going to be next season which means I have to wait which is super unfair! Did I ever mention how much I love this show? Because the relationships, the world building, the characterisation – it’s all so very awesome. I really love this show. It’s also really pretty.

I think one thing I really have to emphasise about this show is, among the awesome plot, the excellent characters, the amazing world building, the excellent interactions, the drama, that this show is HILARIOUS. The quips, the snark, the one liners. I think I’ve really been remiss in not mentioning this over and over and over in every episode – because they are Really good. Even when the shows are dark and heavy, it is really funny. There’s always hilarity.

On top of the awesome story, awesome world and characters, we also have some more than decent diversity. Obviously we have Dutch who is a Black woman, awesome (also born in my home city which doesn’t make me biased at ALL, honest) and largely free of usual tropes. She’s awesome, she’s capable, she has amazing relationships, she has some excellent motivations and complexities and a past and is fully involved and beyond doubt the protagonist. She’s really an excellent character. We do have other POC – including a lot of background and bit POC which I really like as well, not just including a major character but making the world more inclusive in general with bit or minor characters. We do have several POC regular characters – Pree, Delle Sayah, Fancy – but I wish they were present more than they were. I’m also not thrilled about Arun

I’ve said before that I have an issue with gender on this show. Obviously Dutch is awesome. We have also had some excellent moments addressing gender as well (I really like the whole “manic pixie dream assassin” line). But the constant hostility between women is a problem – and with Pawter, Sabine and Delle Sayah all dying as well – even characters like Bellus and Clare were completely sidelined. Dutch needs some women in her life. Who she doesn’t hate, really.

Also I’m repeating the same irritation I had with the LGBTQ characters on this show I’ve mentioned before. We have lots of hints, a great big stereotyped Pree (and even he isn’t overtly labelled as gay!) but no actual overt LGBTQ characterisation. And let’s be clear, this isn’t a show that shies away from sex, just about every character here has had at least one opposite sex encounter – usually more than one. It’s a problem – don’t play the hint game, don’t play the subtext, it’s 2016 and this is your second season. Stop