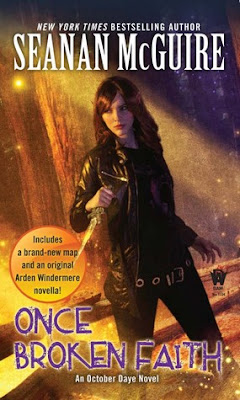 The cure for Elfshot – the poison that puts fae to sleep for 100 years – has been found and it promises to completely overhaul fae society. Now the ultimate weapon beyond death has the potential to be neutralised and who knows what the fallout will be. Especially with all the people who can now rejoin society

To keep ahead of the potential chaos, the High King and Queen of North America have called a conclave of West Coast monarchs to discuss the issue and the way forwards. And, of course, October is invited. And by “invited” he means “required to attend”. That means lots of Pureblood politics, being the only Changeling in the room and a lot of etiquette

Until a king is murdered – and then things get far more awkward and really, politics become the least of Toby’s worries.

There are so many characters in this book I love. I love October and her relationships with the other cast. I love how they can be very complex like her mixed emotions with Sylvester. I love how she manages to be sensible and emotional in a very real way. I love how he can respect someone but still not have time for the bullshit, I love how she interacts with the world around her striking a delicate balance as a changeling, yet a Changeling with influence. I love how her past has shaped her, I love how dedicated she is to the ones she loves – and all the ones she loves, not just her love interest. It is a joy to read through Toby’s excellent, complicated, very real eyes.

I love how she’s constantly out of her depth – but smart and funny and quickly adapting and able to cut through the bullshit around her with an excellent skill – being the outsider while being in the halls of power gives her an excellent insight on the glaring flaws of the court system. It’s excellent and excellent way to present world building as well.

The Luidaeg is an ongoing wonderful, terrifying, caring, powerful, arrogant, yet gentle, furious and awesome and snarky character who bulldozes her way through everything with the sure and certain knowledge that she will kill you and eat your skin if you have to

All of these characters work so well because the world setting is amazing. And I don’t just mean the incredible work that has gone into researching and including so many fae varieties and legends and including them in the book. There are histories and politics and wonderful insights into magic (even if that magic is “magic is weird and has few rules). There’s a real sense of a heavy world beyond all the references that has just continued to build and grow over the period of the books. This works to make all the political intrigue – from the different crowns, the different view of Undersea, the treatment of Changelings, the Firstborn and how they relate to their descendants to the whole political structure – feel not just involves and complex but also real. Like it’s been fully designed to work, rather than twisted to fit the convenience.

With all this we have a plot, an excellent plot that is well paced, fun, has plenty of action and snarkiness, emotion, world building development and the character interactions that make me love this series. It says a lot that the plot itself is not especially complex or original. We have a bunch of nobles arguing and yelling and we have a murder mystery that Toby has to solve. It’s simple and it’s certainly been done before (Toby has investigated several murders herself) but it pulls in Toby, the world, her connections and her emotions and makes for a plot that is fun, interesting, a great read and engaging. You don’t need brand new concepts to drive a plot, not if you have the world building and characters to drive it

There are also lots of lovely little gem moments. Like Toby speaking to the two purebloods who actually value Changelings – but has assumed things about her just because she is a changeling. The arguments over whether Elfshot should be cureable or not are similarly deep and layered and really add to the world building. And I love Luideag’s awesome takedown of the idea that the fae need to mirror a Medieval setting. I loved the poking at fae politics, the need for cold calculation and the lamentable commentary on things like the fostering system

I’m also fascinated by the hints that the Luidaeg is dropping this book. There is definitely some major meta-plot on the way that’s going to ambush October!

One element I think did move forward considerably in this book was LGBTQ representation.

This series has always had a lot of LGBTQ characters – but they have usually been very background (like May and Jazz who are in most books, including this one, but usually appear very briefly but then fade into the background. Again, like this one). If they are more prominent the fact they are LGBTQ will be mentioned once very briefly, in one book and then not be mentioned again: this has applied to the Luidaeg, to Madden (a very minor character), to Walther, to Li Qin. They have been mentioned as LGBTQ in the main series – but it has been a single mention over the course of 9 books – blink-or-you’ll-miss-it inclusion. Especially since only May and           (again appearing briefly) have been in a relationship or been in the same room as their partners. It meant that you had LGBTQ inclusion, but very little LGBTQ portrayal because it was very quiet

This book changed a lot not buy just having the brief appearance of May and Jazz, but also by including several of the other minor LGBTQ characters (Li Qin, Madden) and overtly mentioning again that they are LGBTQ. Yes, it’s only a mention, and no we don’t get to see any of them in a relationship, but unlike past books it didn’t rely on previous books in the series to establish and LGBTQ character. We also have Quentin, a major character in the series, overtly be shown to be bisexual (again, we don’t see his relationship or see him interact with Dean at all). This promises for much more overt portrayal because Quentin is too central for him to be a brief mention like May, or for his relationship to be completely invisible or a brief reference – this is promising for future books

Unfortunately the same cannot be said for POC – to my memory we have Li Qin, Raj and              , who appear vanishingly briefly and this is a book with a vast number of characters. Arden may be a POC – she is described as “olive skinned” which is one of those ambiguous “quiet portrayal” descriptions. This is a severe ongoing issue with this very long and large series and cast.

In all this book was one of those that left me a little sad when it ended; which to me is always a great sign of an excellent book I’ve enjoyed. If I enjoy reading it, love it and don’t want the book to end and feel disappointed when I’ve finally reached that last page then I have a gem.