Mine to Possess (Psy/Changeling #4) by Nalini Singh 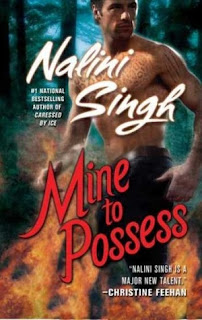 Talin works with disadvantaged children – homeless, troubled and in trouble. And several have gone missing and the only thing she can think to do to help them is confront a horror from her past

Clay, the wereleopard and desperate reminder of a terrible past she’d left behind and a moment of terrifying bloodshed that still stains her memories

Clay can’t believe the woman he long thought dead is still alive, but he can hardly reconcile the fact she left him for so long nor can he bring himself to let her go again.

I continue to love the world building of this series – the Psy and the Changelings, the Psy’s society’s desperate struggles as they face conflict and threats on all sides against the council; whose loosening grip increasingly shows the flaws in Silence while at the same time we still see how dependent the Psy are on it. I love how we’re seeing Psy both shape the netmind and be shaped by it

I love the history of Silence and the existence of the Forgotten which is so excellently filled out and developed to create a very real society with so many possible storylines and characters arising out of it.

I really like that we’re beginning to look at humanity as well – after all here we have people with no powers, no strength, clearly the victims of society. They’re even called the “worker bees” and often forgotten. But Talin embraces this label – and we several mentions of how the humans are supposed to be the glue that holds their society together

All of this is excellently explored with the ongoing story of the Psy, Talin desperately hunting for missing children with extra bonus insight into Ashaya, another Psy facing the Council while still being Psy – not an outsider like Sasha or Faith. She’s still Psy, she’s still Silent – but she still fights the Council. A Psy doesn’t have to be none-Psy to oppose the Council or what the Psy have become.

One thing that was powerful was Talin’s living with trauma – as someone who suffered abuse as a child. She is vulnerable, fragile and in considerable pain – and often very very afraid. Yet, despite these vulnerabilities, she’s still an active participant in the story. She isn’t shelved, she isn’t dragged along behind the others, she doesn’t cower and not have an opinion or input. She can have fun, she can engage in banter, she can be snarky and she can stand up for herself. Just because she’s vulnerable doesn’t mean she is presented as being an object to be placed in the corner and acted on. The whole plot of this book begins with her facing those fears and working, fighting despite them

But she is hurting, from her fear, her recitation of her childhood (with a foster family that was both loving but not a magic bullet), how she embraced sex as a method of self harm, how she is desperately afraid of Clay, even though he saved her, because of the extreme violence she witnessed as a child.

Alas, though, this is a romance. And, like the previous books in this series, it’s a romance that makes me cringe. Can we not have a romantic lead that makes me think “kill it! Kill it with fire!”

So, our leading lady is Talin, a human woman and she is deeply traumatised by a terrible past, thinks she’s dying and is utterly terrified and fragile and needs Clay (our leading man) to help heal her, strengthen her and have her trust enough to feel love again

The pattern for “healing” is also depressingly similar – involving completely ignoring the woman’s wishes, her agency and her barriers (while smelling how horny she is so it totally makes it ok to ignore her agency, honest) until she cracks and we discover the man was right all along. Talin isn’t a Psy but she is terrified of Clay from the very beginning after seeing him brutally murder her abuser as a child. She also has major issues about sex due to her past and doesn’t want to enter a sexual relationship with Clay. After much prodding she accepts him as a friend and that friend’s touch. And his instant come back? Friends also kiss (yeah? I don’t recall Clay, Dorian, Nathan or Lucas kissing, and they’re very good friends) and he thinks about how he’s going to keep pushing against her boundaries to until she has sex with him. He views any “no”, any resistance on her part as a temporary thing he just has to work at. Which is just like Lucas, just like Vaughn and it’s awful. You do not heal a trauma survive by pushing her boundaries and pushing her into sex. This is not healthy.

On top of this we have a whole lot of sex shaming of Talin because she self-harmed with promiscuous sex. And, as I mentioned, yes it’s not a bad depiction of a traumatised person. But the main reason this is used in this book is so that Clay can be utterly furious that she dared “sell herself cheaply”. Not only is this grossly sex shaming and heaping shame on a victim to boot – but he’s a Changeling! We’ve just spent the last 3 books commenting on the fact that Changeings have a very open culture when it comes to sex! What is this? Why is it here?

And while, as I said, I think a lot of Talin’s trauma was well portrayed, we still had that magical healing cock making it all ok. This is extra frustrating because Sasha is RIGHT THERE. She’s an E-Psy, she has the power of emotional healing – she is SUPER THERAPIST! Let’s have some therapy! There’s no excuse not to!

We do have a considerable racial diversity – Clay is half Egyptian. We continue to have Sasha, Mixed race Asian, play a small but significant role. The Counsel is very racially diverse, one of the children they’re trying to rescue is Persian and we have the new character Ashaya who is clearly going to be much more significant as the story progresses who is definitely mixed race (which we’re told again and again is the norm among the Psy). I’m glad to see this return as the last book didn’t have the same racial diversity as its predecessors which was always one of this series’s strengths.

We have no LGBTQ people – coupled with, as I’ve already touched on, a very heteronormative depiction of a society that is supposed to be very casual with affection and touching. It’s not like that would be radical – there are several human societies in our world where casual touching between friends of the same sex is not alien; there’s no reason why the Changelings would gender segregate their casual affection which is supposed to be so important to them.

This series… frustrates me. There is so much awesome here but the most dominant part of the book is the romance – which is inevitably full of really gross tropes.