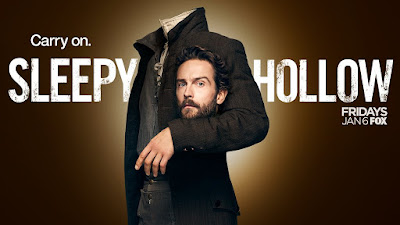 Instead he has been captured by a spider demon, cocooned and forced to go on trial for various guilt things. Like the death of Abbie. And inflicting Cranewreck on us. And the terrible storyline of us deciding his son, the horseman of freaking war, needed handingly softly softly. And the treatment of Frank. And the introduction of Hawley

Oh wait, that’s my trial for the writers of Sleepy Hollow.

So this means the death of Abbie, the death of his son and the fact he spent a hot minute grieving for Abbie before moving on to a new team who will probably die as well. A

Ichabod argues eloquently in his defence (because Abbi made a choice! By Abbie we, of course, mean the shitty shitty writers who we will never ever forgive) before succumbing to the Sadness and preparing his own suicide – which is this demon’s whole mojo. It will then use its sadness powers to spill out everywhere.

So to the gang. They go investigating where Ichabod got to and Jenny heads off to the cave of sadness where he is being held (after some nifty research) – she goes alone because she doesn’t think Alex and Jake are up to it. They follow her because there’s a limit to what one woman can face alone

We also have a really nice biplay between Alex and Jake about their new lives: Jake was planning on quitting before this. He realised he was doing nothing and the archive was full of cool ideas but none of it was real or meaningful. He was ready to move on to do something – and now Ichabod came into their lives with all the supernaturalness and everything is cool and awesome and he loves it so much because it’s exciting and interesting and making a difference and real.

Alex, however, perhaps more reality based – asks if it’s a good thing that all this terrifying dangerous stuff is actually real

When Jenny is captured trying to sneak into a military base Jake and Alex do the sensible thing and… call Diana. Yes, no hotdogging, no silly rescue attempts, a very sensible decision

Diana rescues Jenny – though Jenny is very quick to point out she didn’t need it and was quite ready to escape on her own. Which is probably not wrong, to be honest. Diana is onside to rescue Ichabod – sure she’s not happy with him or Jenny and doesn’t trust either of them and definitely isn’t going to let them near her daughter – but nor is she going to let him be eaten by a psychic despair spider demon. Especially if said despair demon can make an entire military base commit suicide.

But the direct approach doesn’t work since any injuries the spider demon takes so too does Ichabod. Since it’s a giant spider demon let it be known that I am totally team “sorry Ichabod, you had a good innings, DIE SPIDER DIE!”.

This requires lots of illegal stuff gathered through Alex and Jake’s and Jenny’s contacts while Dianan either covers her ears or gets Jenny’s contact to play ball by invoking military backgrounds. They can then mix it up and prepare to fight again with their new toy

Along the way Jenny and Diana discuss a lot of the whole Witness thing – including things like how Ichabod knew Grace then moved a few centuries forwards and ended up with Grace’s descendants. Jenny makes the point that it’s not a coincidence – it’s a connection, a mystical connection that draws them all together. Including Molly. Diana has also checked out Jenny and researched her stay in mental institutions and prisons but Jenny isn’t phased or ashamed. She knows her past – a past directly caused by facing the supernatural at a young age and not being prepared or protected. She further brings up that her mother was a single mother – like Diana – who nobly, desperately fought for them. But against the supernatural pressures that come with being a witness she just couldn’t do it without help

Yes it’s a really big sales pitch but it’s an excellent one. And you can see why Jenny is so invested because this is a mirror to her life – but with a chance to stop that one derailing moment when she had so little support. Rather than push Diana, she lets her own story be a tool to explore what being a witness without support can mean, especially as a child. She presents herself and Ichabod not as dragging Molly into something – but as protecting and supporting her in the face of what is coming to her door anyway

So they go back with the toys, break Ichabod free and kill the big bad – and Ichabod won’t wake up. His soul is adrift. Now one point Jenny made is the connection between Abbie and Ichabod was so awesome it would literally pull each other from different worlds

That connection was an artful piece of writing, acting and development. Don’t reduce what was built there to “witness woo-woo”.