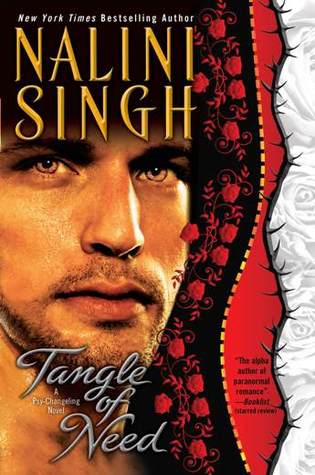 Adria and Riaz are both very dominant wolves who have newly returned to the Snow Dancer lands after some time away. Time in which both have been badly burned by their romantic lives

While Sienna is finding her relationship with the wolf Alpha Hawke much smoother than anticipated – but preparing to be Alpha’s mate is much more complicated with some heavy responsibilities.

The Psy war rages unabated, flaring into open civil war – and the desperate Pure Psy are restoring to unthinkable tactics that the Snow Dancers cannot ignore and cannot be neutral in the face of.

I do like how we’re calling back to a lot of the previous characters and partners in this book. One of the main issues I have with these kind of Paranormal Romance series with different characters each book is that the previous characters seem to drift away. We get nice cameo appearances of Sasha, but for several books we seem to have completely forgotten that Faith, the uber-powerful F-Psy is out of there. The Leopards in general have been very sidelined in the last few books which is such a shame because they were the first characters that have been kind of lost

This book ended up feeling far more of an ensemble book – drawing on the Council, with Hawke and Sienna very much being present and powerfully involved. We have predictions from Faith, we have Sasha and Ashaya, we have Judd all taking part. Not in a huge way, in all cases – though I wold say Hawke and Sienna are virtually co-protagonists with Riaz and Adria – but definitely taking up a powerful part of this book. We also have a really fascinating side plot coming with the Arrows and Kaleb

And I really like this side plot, because they’re both deeply immersed in the consequences of the Psy Civil War (which, to the Changelings, is still somewhat peripheral to their lives. But I still respect the conundrum they’re faced, their duty to step up because others are relying on them and whether they could possible be still in the face of such utter atrocities) but also because they represent that missing question over Silence that is not really analysed in the Changeling packs: the idea that Silence is necessary for some Psy. The conditioning that makes them safe, how the Arrows have relief on it or even how, if it starts breaking, the Arrows can begin to feel the brutal lives they’ve lived and consider whether they want to live at all.

In general there’s a widening of the plot in this book beyond the central romance which allows us to explore much wider and deeper. Like there’s Sienna realising she needs to step up as the Alpha’s mate means she is studying more about the pack so she can step up to discuss matters with Hawke. I love that she is considered to be integral to the Pack leadership structure and that having the deathly power is not enough to do that: her explorations allow us to explore as well just as Kaleb and the Arrows let us see more of the Psynet.

(Though I do want to know more about the “Maternal Females” which seems to be set up as a third class from both Dominants and Submissives. Which sounds nicely interesting and complex but the fact it’s gender specific makes me think it’s created for the sake of having “powerful women” but not having them as warriors. Which is fine and even right – but why is it women only who need the less-aggressive dominant role?)

Adria and Riaz both bring different elements as well: Adria with her take on dominance and Riaz being a lone wolf and the way that relates to the world wide influence of the Snow Dancers (again another element of this series we haven’t really developed)

Their romance is also interestingly different. For a start they’re both dominant and Adria makes it clear over and over and over to Riaz that she isn’t going to be meekly submit to his authority. I also really like that this relationship takes on the whole concept of the Mating Bond: And how it can be resisted and isn’t the final word in the romance. I like this because I hate mating bonds. I hate the removal of romance, of developing affections or actually choosing a relationship which mating bonds impose. By having this we not only develop this relationship but by simply framing this relationship as a rejection of the mating bond raises the possibility for the previous relationships. It adds an element of consent that is otherwise missing from the previous depictions.

Like Adria is a super dominant female Alpha – excellent, it’s great that we have some alpha, dominant, physically capable and dangerous women. It’s happening more in as the books progress which is so necessary as we had so many ultra-vulnerable, fragile women in need of saving and protecting and the big bad dominant men who did that.

But even with introducing dominant women like Adria we then follow the same very rigid gender role’d tropes. Her central angst (and in this series everyone has an angst, it is known) is that she was with a man who couldn’t handle that she was more dominant than him. One of her central concerns is that she can’t be happy with a man who isn’t as dominant (or more) than she is. See also Mercy and Riley. See also Sierra and Hawke (who take another prominent role in this book). It’s great that we’re finally seeing women who match the men for being pro-active, strong and dominant but there’s still a rule that means the man they’re paired with needs to be even stronger. Sierra got the ultra-dominant Hawke. Mercy got the huge, stronger, Riley. And Adria gets Riaz who, we see, can take her in a fighter, is ultra-dominant and just to be clear we still have to have a scene where Adria collapses into desperate sobbing tears over her break up and he has to hold her for comfort. We never see this gender role reversed, no matter how tragic the man’s past has been (and we’ve had Hawke, Lucas and Dorian who have all played the “most angsty of them all” competition), he never falls into the arms of the woman he loves for lots of sobbing

Also I can really do without pregnancy being used as yet another excuse for the “hyper-protective” Changeling male to leap all over his mate and try to lock her up in a little box. On top of this we also have the excuse of new-mating to again have a man try to put his mate in a little box for her own safety. Linked to this, I can do without the mature-Changeling female deciding she’s going to voluntarily put herself in that box not because she needs to be but because she realises that her silly man’s silly protectiveness is going to foolishly distract him so she’ll go in the box for the greater good because she is all mature. Recognising she doesn’t need to go in the box and that the whole mate protectiveness is irrational doesn’t matter if you STILL submit to it. And why don’t we see the reflection of this? It’s repeatedly said (though not shown) that changeling lieutenants/alphas/dominants/etc can be male or female. We’re even introduced to female alphas. So why the gender binary at all? If a woman in these relationships is dominant (like Adria) why isn’t SHE hyper protective of her mate? Why isn’t Mercy demanding Riley stay home and make sure he bubble wraps any sharp corners?

So, yes, still issues. There’s also an ongoing issue with the complete erasure of LGBT people – and, really, this is the 11th book. 11th book and innumerable characters and none of them are LGBT. What is perhaps more galling is this is the first book to acknowledge that LGBT people are actually possible – since people assume the single Riaz is gay. But that’s it – oh and the suggestion seems to anger/offend him. And if he were gay why would he be perpetually single? Is the pack homophobic? Is he the only gay man in California. In a book where the closest city is San Francisco?

We do have POC – because we’re drawing on several previous books. So Sasha is mixed race South and East Asian. Nikita is Asian. Ashaya is a woc as is her twin. Lucas is described as dark skinned. I do feel that we have skewed more white in later books with the representation resting more on the long established characters because the early books were very very very racially diverse. But those characters are important but I’d like them to have more presence

And despite saying that one of the main characters – Riaz, is a Latino man with a definite connection to his latino family and culture which is clearly shown in the book.

I have a lot of hope from this book – because we’re expanding the world, exploring the world and there’s a nice focus on established characters rather than letting the new characters carry the whole plot with their romance. I’m hoping this is a sign that the series is going to rest on the characters that are already established and the many many storylines, plot hooks and massive world rather than add more to what’s already there. Because what’s there is already really incredible.