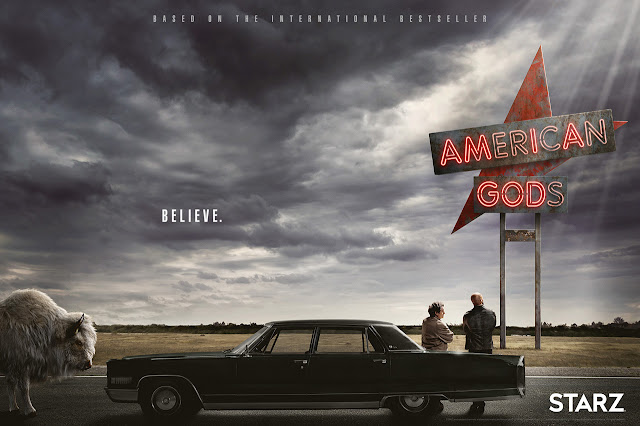 There has been so much anticipation for this series and it’s finally here! I admit this was a book that really divided Renee and I. While the world setting was amazing, it was just a bit long winded and rambly, the pacing just a bit drawn out. But that’s the kind of flaw that is really easily addressed in a television format

If I hadn’t read the book I think this first episode would frustrate me immensely. Because there’s that pacing issue. This actually reminds me of The Leftovers, in that so much time and energy is spent on awesomely setting tone and theme with some really awesome CGI and some excellently chosen music and Shadow’s very powerful but understated acting carrying so much emotion with his body language.

But it’s also kind of rambly and more than a little convoluted and bizarre to push those themes. I think I’d definitely be intrigued by all of the imagery of this episode – but if I hadn’t read the book I wonder if I’d be more frustrated, more confused and more lost in the sheer random bombardment of imagery and emotion.

It starts well with a nice Viking recap – the Vikings arriving in North America and being greeted by a truly comical number of arrows. Deciding that this is maybe not for them they plan to sail home – except the wind is not co-operating. They need Odin to step in and make it right. Odin isn’t listening so they begin a series of terrible sacrifices before the wind picks up and the can finally leave. And lo, the voice over says, when Leif arrives later he finds his god is already there.

And now to the present where we join Shadow Moon, soon to be released from prison only to tragically have his release speeded up – because his wife has died. He’s released and he begins one of the most difficult journeys across America anyone has faced (who doesn’t fly United Airlines anyway) involving storms, awkward airline staff and general discomfort

Along the way he meets a man called Wednesday. Wednesday is a con artist, a grafter who artfully scams a first class ticket on a plane – and recognises Shadow as a fellow con artist and an ex-con (he has an eye for this. Only one, yes catch those crafty hints). He wants Shadow to work for him though Shadow is beyond reluctant because, first rule of the ex-con, is not to do anything to get him back in prison. (Though points for the “outstandingly improbably name” snark).

Still through this terribly fraught journey back home, Shadow learns he doesn’t have a job as his best friend he was going to go work for also died in the same car accident that killed his wife. Vulnerable and hurting and lost he still plans on saying no to Wednesday. He flips a coin and fixes the flip to emphasise the point – except Wednesday and his mojo has fixed the fix and Shadow finds himself losing the toss. Hardly a binding contract but with little else to do and a fair amount of booze Shadow accepts the terms: so long as they get him to his wife’s funeral, pay $2,000 a week and he isn’t expected to hurt people who aren’t hurting them.

We’re also introduced to Mad Sweeney who introduces himself as a Leprechaun, performs a series of coin tricks which become steadily more and more impossible and spooky. He also picks a fight with Shadow, cutting closer to the bone until he hits on his dead wife to provoke him. The fight is for the sheer joy of it – Mad Sweeney does not seem to be a very sensible fellow. Shadow leaves the bar with a leprechaun’s coin, at least and he can head to the funeral

Where he meets Audrey, the wife of his best friend who reveals in the crudest of terms that her husband and his wife were having an affair and in-car blow jobs caused the crash that killed them. Ouch.

Audrey is so righteously agonisingly furious and hurting that it’s almost amusing (in a “I’m a terrible person to be amused by this” kind of way. Though actually – aside – American Gods seems to do this a lot in this episode. Take weird, scary, horrifying moments and ratchet them up to 11 to the point of them almost being amusing: like the Vikings almost ludicrous fight. Stylistically it’s jarring and surreal and powerful and really works) while at the same time being deeply painful. As Shadow extracts himself from her bitter plans of vengeance he leaves the leprechaun coin on his wife’s grave – where it sinks into the soil

He leaves – and is attacked by some kind of electronic face hugger that drops him in some kind of virtual reality where he’s confronted by a pixelated guy with improbably hair smoking a toad while demanding Shadow spill the beans on all of Wednesday’s nefarious plots (while simultaneously dismissing Wednesday and his ilk as irrelevant). Shadow refuses on the grounds that he knows nothing and, if he did, he works for Wednesday – so the guy orders his faceless goons to kill him

And they are literally faceless – pixelated constructs that drag him back into the real world before brutally beating Shadow… and then hanging him from a tree in a moment that was foreshadowed by his dreams and the white supremists in prison (and, of course, is full of Odin imagery). OF course, you don’t kill your protagonist in the first episode – the rope snaps and all of the faceless goons are killed in a shower of gore. I mean that literally, the gore isn’t even slightly subtle, we’ve got a small pond here

Interlude to LA where a woman called Bilquis is on a date with a man and invites him back to her bed. They have sex and she demands he “worship” her – which he does, clearly spouting lines which she’s put into his head and in a voice which has the patented spooky echo-reverb. WHILE he’s in the midst of his supernatural worship he offers all of himself to her, everything sacrificed to her. And she consumes him with her vagina

I honestly can’t think of another way to put it. Mid sex while he’s worshipping he vanishes up her vagina. OK then. Perhaps more powerful and meaningful is how she describes herself - spent, a shadow of what she once was, chasing former glory.

So, that all happened. And it was a lot. The episode was an hour long but I felt far far far longer. And some of that is in a good way, we covered a lot of ground and really delved

And some of it vaguely just… odd. Shadow’s dreams of burning eyed bisons and his wife and trees and nooses were all very potent and meaningful and foreshadowy – but necessary? The trouble in the plane, the weird conversations especially in the beginning of the episode felt… unnecessary (“it feels like the sky is constipated” I mean really? Did we need to have Shadow verbally confirm how everything felt ominous when the music, his body language et al had already confirmed it).

The theme and feel of it, the pain, the absurdity, the surreality (if that’s a word) is really well done – but sometimes too well done, to laid on thick, too much time spent. Like they’re worried the audience would miss it and need to have it really hammered home. And I wonder how frustrating that is to audiences who don’t know exactly where the plot is going?

Since I do know, I kind of love it. I love the ominousness, the utter surreality of it, the grittiness and even the slight desperation that already seems to permeate it all. The atmosphere is perfect, the casting amazing, the acting spot on and the whole appearance incredible. Now if it can hold on to its coherence and not be lost in all the beautiful images…

I'm also kind of torn over how to recap this. Do I refer to the man in the car as Technical Boy, a new god of technology or is that a spoiler? Can I talk about who Wednesday is? I mean anyone with a basic grounding in Norse mythology should know by the hints in the first episode - but should I in the recap? Should I talk about who and what Bilquis is and why that makes her words about who she was more poignant? How much can I assume people have grasped from this episode and how much would be spoilers?