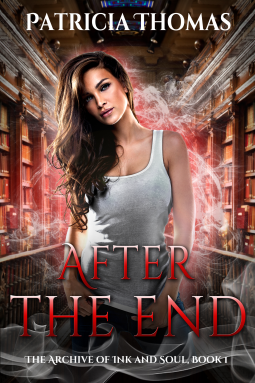 When Kadie wakes up in The After she is completely out of her depth. She thought she was just a normal woman who recently had her heart broken

Now she learns she is a character in a book. And not even a main character – and she’s a perfectly normal woman lost in a world of fictional characters – a world of wizards and vampires and shapeshifters and who knows what else

Not only is she lost in this world – but she’s also being hunted. She doesn’t know why – and nor does the mysterious Archive that controls this world – but until they learn the answer they’re not letting her wander into danger. No matter what she wants

It’s interesting how this series works with The Apprentice which is set in the same world but not the same series. That book did an excellent job of setting up the world, the factions, the way the Archive operates, the way of the world and its characters and the setting. And this world is wonderfully complex and involved and fascinating that it really benefitted from having that book to introduce everything – the ideals, the concepts, who everyone is and what they could do and why was all so very involved that that excellent book was a great way to introduce us to the series

It also introduced us briefly to a few of the conflicts of this series: but primarily focused on the world itself. The amazing, beautiful, rich world is introduced and displayed.

And this book now pokes the holes. Or more of the holes. While we saw hints of injustices in The Apprentice this takes it to the next level. We see how Prosaics are treated, almost shunned in the magical cities, certainly treated with contempt and derision and even good people treat them more like small children or pets. Awkward, burdens, not necessarily to be hated, but certainly to be at best pitied and definitely shuffled out the way. Certainly not treated as important or useful or worthy of making their own decisions

The point is not just generally well made explicitly but also in the general treatment of prosacis – from the basic imprisonment, to the clear lack of respect the Archive has for their opinions or wishes or abilities to provide insight – to even any consideration that they can be useful or productive or helpful. It’s really well portrayed more in these constant small moments of backhand, non-malicious disrespect than anything else

But what is it like to be a side character? What does it mean to be someone who literally can’t remember the name of their own parents? Whose entire existence is defined by having once met the protagonist briefly? What would it mean to read your own book?

And what does it mean for a character like this to be the protagonist? More than anything else that role is a direct subversion of the whole idea that these book-based characters are not fully developed people – we see it through her growth and participation

Again, I have to admire how this is done – with careful subtlety. No-one has to overtly say “she’s a full person” because she just clearly is.

Unlike The Apprentice we have a definite story and conflict here. We have an excellent mystery as well as following the path of a brand new fictional entering this world. We have more than just exploration (which I was concerned about) but political factions, major differences about how the world should run and what should happen

I think there is, perhaps, a moment in the middle that seems to drag. But I think that’s a stylistic choice because there is a long moment where Kadie doesn’t know what’s happening or what the whole mystery is. The Archive doesn’t know what’s happening and everyone is confused and frustrated and looking for answers which is a long, gruelling and not very productive process and reflected in the book.

One of Kadie‘s fellow characters is a gay man – he spends much of the book locked in his room so we don’t see much of him. We also have Marc, the third character, who is Asian – we see more of him than Devon and he certainly becomes more involved in the story. Harley, a woman who Kadie meets when she first arrives is a Woman of Colour. We similarly have people of colour among the people of Sanctuary they run into and among the High Council as well. There is a general attempt to make the general populace racially diverse which is also a bonus to include on top of the odd character in a sea of whiteness. There is also a brown skinned vampire character I believe will later be more relevant in the series as he seems to be a more moderate branch of the opponents to the Archive which I think will bring nuance this series seems so very good at. There’s also a hint that different supernatural

I also love the examination of what it means to have an entire populace either of book characters or people descended from book characters – not just the number of people with special powers or weird technology. But how most of them are attractive – because most books have attractive protagonists and main characters. Or how most of the populace is quirky or eccentric – because how many books have we read where characters don’t have a great deal of character development but have that one quirk to try and make them more human? How many romantic heroines are clumsy? How many YA protagonists have a disproportionately high interest in classical literature or playing classical music or some other unusual and slightly quirky habit? I think this little elements are especially joyful for anyone who reads a lot – because you can see it, because we’ve seen so many of these things in the fiction we read again and again.

In some ways this series reminds me of the Libriomancer series. Not because there’s any great similarity of the worlds or even the plots – but because they’re both a love story for reading. They’re both a celebration of the love of books, of the joy of fiction. These are books for people who love books, for people who adore reading and that’s clear with every word and I love it.