The Handmaid's Tale and Race 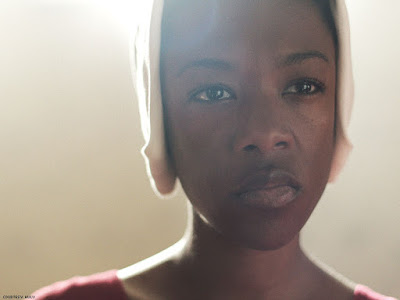 When Margaret Atwood published in The Handmaid’s Tale it quickly became a seminal feminist text.  It largely dealt the United States becoming a fascist patriarchal, white, Christian fundamentalist country.  To that end, in the original narrative, people of colour were sent to live in the colonies, and Jews were given the opportunity to emigrate to Israel because they were viewed as people of the book but certainly not white. In its updated version, Hulu has chosen to make some changes in order to make the story more inclusive.  By today’s standards creating a television show without people of colour would certainly be deemed by many progressives to be problematic. To that end, several characters in the book who were originally white: Moira, Luke and Nick are now being portrayed by people of colour.


To be clear, I absolutely love Samira Wiley and think that she’s a brilliant actress but changing Moira from Black to White should not have been done without some kind of interrogation of race. Luke and Offred had an interracial relationship before the rise of Gilead and yet, the only issue they seem to debate is gender. It’s not possible to have a mixed race relationship without having ongoing conversations regarding white supremacy and racial privilege.  Nick we are told is considered a man of low status - so low in fact that he has not been accorded a woman.  Nick’s status is framed as being about class rather than the fact that he’s clearly of Asian descent.  Each and every update has been devoid of any critical race theory or even cultural identity specific to people of colour.  It reads as inclusion for inclusion's sake - or tokenism - to avoid charges of erasure.


The Handmaid’s Tale reflects a lot on the oppression encouraged and championed by the Religious Right. It serves not just as a Dystopia, but also as a definite cautionary tale - which has only become more relevant in the last few years. But the history of the religious right is not just a misogynist and homophobic one - it’s also very much a racist one. One of the first - perhaps the first - championed cause that launched the religious right was not abortion - it was segregation - as in fighting to protect it against “government interference” not trying to defeat it. White oppressive Fundamentalist Christianity has most definitely had a hefty stamp of racism from its very beginning - it beggars belief that this underpinning prejudice will magically disappear.


You simply cannot separate the Christian faith from racism. In the name of Christ, Christians have colonised, murdered and terrorised people of colour. While there hasn’t always been unity of thought, because the bible was as both a justification for slavery and a reason for why it should be abolished, it serves as evidence of the ways in which faith has often been the underpinnings of racialised terrorism. Even those who wanted to bring an end to slavery, most certainly didn’t see Blacks as the equal of whites. When Catholic priests and nuns were beating, starving and raping Indigenous people in residential schools, they did so with one eye on the cross. Christianity has always been part of the justification in order to deny the true agenda of White supremacy - the absolute subjugation of all people of colour at any cost.  So desperate were White Christians to make God in their image they made a Palestinian Jew White. The blue eyed, blonde haired Jesus is a figment of the imagination much like the idea a supposedly benign Christianity.


One excuse for why racism isn’t present in Gilead is that fertility trumps everything. The central motivator to the US descending into Gilead is the fertility crisis - more and more people are unable to have children. The argument is that Gilead is desperate to have any children, regardless of race.


Again, this completely ignores how prejudice and oppression actually looks in our world. Look at religious movements that encourage large families and get really intense about squeezing out lots of young ‘uns. What’s the narrative? “They’re out breeding us!”. This is one of the cornerstones of the “quiverfull” movement  - which espouses good Christian women to mass-produce children like they have to personally create their own sports teams (Where “they” can be Black people, Muslims, Latino immigrants, Catholics - there’s always a nebulous menacing “they” are winning the womb war). You can also do some googling and quickly see that “being outbred” is definitely a concern for vile racist organisations like Stormfront (no, I am not linking to that filth). You can see a similar narrative on Nazis-calling-themselves-AltRight sites as well. You can see articles in the Daily Mail (no, still no linking to filth) wringing their hands about Britain becoming Muslim and America reaching a “tipping point” where non-white people outnumber White people - something that continually buzzes the news as some kind of major, frightful event.


The reaction of an oppressive, White Straight Male, religious patriarchal society to a fertility crisis is most certainly not going to be “let’s breed more Black/Latino/Asian babies!”. The womb wars are a very real thing among this movement - outbreeding the “other” is a campaign for them. These people are not going to see a declining birth rate and think “all of humanity is in peril, come people of all races unite in joint purpose to produce multi-racial babies by the score!”. They’re going to see a decline in White babies and panic.


And just as that panic is, accurately, portrayed by Handmaid’s Tale as inflaming hatred and prejudice and exploitation against women and LGBT people led by the straight male elite, then equally it’s going to drive the same bigotry against POC by that same elite which is also White.


Straight White Male Christian power rising to new heights and reducing everyone who isn’t one of the elite to a criminal or chattel is not going to draw a line at racism. It makes no logical sense that it ever would - it makes no sense that a panicked, power hungry, repressive authority is going to suddenly accept one of the most oppressed and persecuted groups in all history - a group that is very much hated by those people and forces today.


The power of The Handmaid’s Tale is that this is our world - this is conceivably our world. This isn’t a dystopian caused by a magical virus, or a zombie outbreak or randomly deciding to divide the population according to random hallucination they have. This is a cautionary tale. This is a warning of the world that ours could become - this is a world where the prejudices we see espoused and championed today manage to gain power. This is a world where the rhetoric we are repeatedly hearing from religious leaders and politicians becomes reality. This is not an alien world - this is our world and it is all too possible.  And this world isn’t - and Gilead would not be - a world where racism disappears.


It is clear that there are good intentions in the casting here - and normally we would certainly be celebrating the inclusion of several Black characters. But there is a lack of nuance, a lack of examination and development and a very glaring omission that means even while Handmaid’s Tale has included Black and Asian characters, it has erased race, racial experience and racism.