Year of the Dragon (Changeling Sisters #3) by Heather Heffner 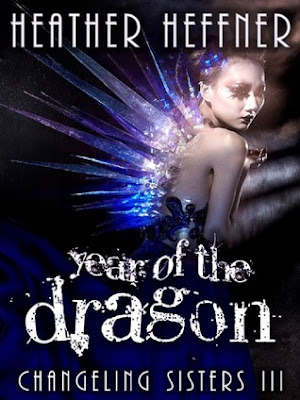 Raina Alvarez has never been fully accepted by her family, since she was the result of her mother cheating with a Korean businessman - who also is a Celestial Dragon

And now her father has found her in time for her to compete, as the Water Dragon of Spring, to become the next Celestial Dragon of the East. A being of great power that would save the world from disaster and shape a new age

But there are old enemies of the Celestial Dragons who have long memories and grudges against Raina’s new found father – to say nothing of dark fell powers rising in the West.

Those powers are also on Citlalli’s mind – newly alpha of the Seoul Wolfpack; a role that is far from easy with her pack divided, her desperate wish to have a real life as a normal girl. And then there’s her shattered soul; a terrible secret that makes all of that near impossible.

This book has a lot of callbacks to all the previous books – including the short story Year of the Boar. I really appreciate that – I love a series that feels like it is getting deeper and richer and stronger with every passing book – it gives a series so much more depth.

But at times I do feel like I’m getting overwhelmed by a lot of characters who I can’t keep much track of – especially since there seems to be a lot of characters (I kind of forgot that Una existed). Part of that is because there are a lot of powerful, excellent female characters each with their own storylines which touches each others but isn’t necessarily all dependent on each other. Citlali’s story is very different from Raina’s story and Yu Li and Nona have their own story.  And each of their own stories has their own relevant characters and conflicts and issues even as they are all linked – it still adds up to a large cast and very few characters that are just there to be tokens or tools.

It does feel a little overwhelming – bit it’s overwhelming because all the characters are characters. Because no-one is there to be written off, because no-one is just there to be an extra, because everyone has a history and an opinion and their own conflicts and issues and difficulties. It’s full – but it’s full of reality and development and complex world building and conflicting and complementing personal motives. You have to pay attention and it’s not an easy read, but it’s worth doing.

It’s interesting to see Raina’s draconic siblings all have their storylines and complexities – and no-one is the designated bad guy. Heesu is young and joyful and the most unconflicted (which, in many ways, means I like her the most). Ankor has his major issues with being a disappointment to his father due to a terrible accident with which he can bond with Citlali. Sun Bin at first comes off as a complete mean girl but in reality has major issues with her father’s sexism and homophobia: always looking down on her for being both a daughter and for loving another woman. They’re all very human and have faced very real pressures.

I also like Raina’s issues because they’re very real and neither make her a saint not make her bitter – but are a very human, complex reaction. Her resentment and envy towards Citlali and what she’s achieved and living in her shadow. Her reluctance to embrace her draconic family when she has no connection to them. Her history with her family due to being blamed as the one who broke the family up as living proof of their mother’s infidelity. There’s a lot of conflict and difficult feelings there with Raina and none of them are supernatural – it’s excellently done

Also on the note of the multiple strong women – I really appreciate both how these female characters are willing to work with  each other (even when Citlali and Yu Li have the *gasp* conflict over the love interest) but more I amazed by the almost unprecedented way they’re willing to celebrate each other’s victories and even step aside for each other. Even recognise that another woman may do their role better than them (I’m not going into details because this series is too good to have spoilers). This is so rare in the books we’ve read – usually you have a protagonist and she is the specialist special one of specialness and no-one can ever be as good as her. But to have several women each with their own strengths and flaws and all willing to respect that? That’s depressingly rare and extremely good to see.

We do have a relationship between two women, as mentioned above. It doesn’t come close to ending well, but the conflict built in there rests more on the world building and Sun Bin‘s father than anything else. Still, don’t expect a same-sex happily ever after here.

Virtually all – maybe all – of these characters are POC, whether Latino like Citlali or Korean like the celestial dragons or Yu Li (or both like Raina) with significant others present as well. As they travel there’s a lot of history and world building and mythology of Korea included in the books as there has been since the very beginning of this series. Both Raina due to trauma and Citlalli are clear disabled characters as well with both PTSD and Citlalli having considerable scarring and missing an eye.

Everything about this book is huge and rich and fascinating. The world, the demons (now bringing in Mayan mythology), the unique take on vampires, the spirit world, the shapeshifters is all so very different. On top of this we have a diverse cast of very real characters, all with their own storylines and rich motives and development, it’s all very awesome

In among all that the plot may be a little swamped – because there is so much here. The world, the characters, their stories – it’s all so huge and rich that the actual focused plot seems a little lost. I felt that Citlalli felt inserted at times in ways that were a little confusing  and there’s a lot of tail ends of Citlalli’s storyline that haven’t been resolved and needed resolving – but they kind of needed their own book in which to do it. Perhaps a short story to resolve them. Instead it felt almost like it kept spilling over into Raina’s story and I was kind of all around trying to slot each storyline in place. Similarly, Khyber and his soul issues also felt a little excessively pushed in unnecessarily. It still worked extremely well and in some way it worked better because the world doesn’t stop just to focus on one person and it emphasises how everyone is kind linked together. Again, it’s good and it all works – it just requires you to pay close attention

Which is probably my summary of this book: this is not an easy story. It takes time and concentration to read – but it is most certainly worth it.