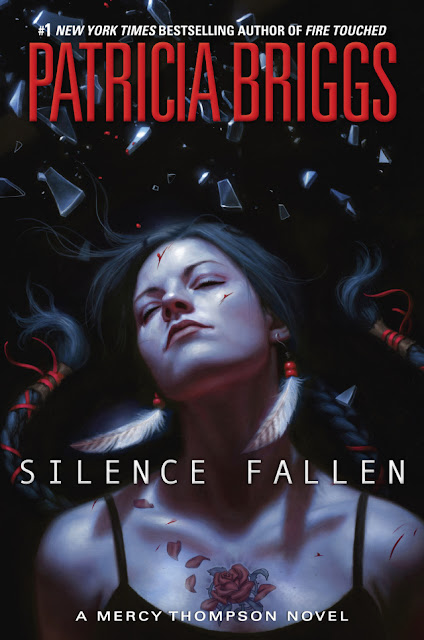 Mercy has been abducted and taken to a whole new continent – but like so many times before, she has again been underestimated and is able to make her own way. She must navigate out of the hands of the vampires.

But being Mercy she can’t help but stumble upon another ancient power that needs untangling with her own brand of Coyote magic.

While Adam is riding to the rescue – but it’s not simple as charging in with tooth and claw. There are politics and the entire stability of Europe’s supernaturals may be in the balance – to say nothing of major forces making a play for his new, “neutral” territory.

We’ve written a lot about this series and how Adam is rather terrifying in his relationship with Mercy, his control of her and how the story and world is written in ways to continually limit Mercy’s independence and “justify” Adam’s “protectiveness”. I was expecting some bad things as usual – so was surprised when Mercy got to leave the house (alone!) and go to the shops (totally alone! No tracking chip, no bodyguard, no drone) I was shocked. I was surprised. I wondered if this was a new turn

And then she’s kidnapped. Her car is rammed off the road and she is kidnapped because she went to the shops alone. I admit it, I laughed. I howled. I giggled for hours – because it’s just so typical of this series that any independence is punished severely.

Thankfully after that moment we see much less of this. In fact one thing I really really liked about this book is how much time Mercy spent separate from the pack. In fact I quite liked the whole concept of building on Mercy’s own heritage as a child of Coyote and him influencing her into a random adventures because he has decided there’s an important reason (or for funsies). It’s an interesting way to give her plot lines that could take her t new places and expand her plot line and get her involved in wider world building issues she isn’t directly connected to as well as add layers to all what has come before and build still further on the neutral zone that Adam and Mercy have built

Similarly it was interesting to see Adam involved in a plot line that involves minimal violence and a lot of diplomacy and back and forth. After all, if Adam and Mercy have become this neutral zone where politics can take place then this is a skillset they have to produce. I love how everything is laid out in this about how the Neutral Zone works along with how different groups are coming together – bringing in Elizaveta the witch, the Goblins, werewolves and vampires. So many times we have seen these as side characters, antagonists or, at best, rivals but rarely creating something this unified. It all promises to be a new chapter in this series, perhaps even a reboot. I think it could work especially well in bringing the two elements together – the greater political meaning of the neutral zone against Mercy’s random attraction to chaos and trouble due to her Coyoteness.

All of this is very good

But I’m less so sure of the actual way the plot unfolded. I liked how Mercy managed her own plot line and overcome and entire different threat was interesting. But it did feel somewhat random – I get part of this is the Coyote nature of randomness – but there are times when Mercy seems to make some odd decisions – like randomly deciding she’s going to involve herself in a war between two local vampire seethes? It’s a decision that seems to come from nowhere when her plot line has entirely been run, hide and survive and suddenly golems, vampires and Mercy leaping in. Both plot lines are good – the vampire war and the fleeing to survive (to a degree – though there’s a dash of convenience to both) but the segue between them seems abrupt. Like there were two stories here and not much idea of how to bring them together

While Adam’s story felt more like an introduction. Adam was here to deal with a vampire Master who was too powerful just to kill. That would be interesting – but in the end, looking back I’m not sure on the level of the diplomacy. Adam spent a fair while growling and grumbling and threatening, invoked the Marrok to make sure they had a shield and then just repositioned: how the tri-cities territory works, the groups involved, Mercy’s position as friend to many (well as protagonist): but there was no actual dealing and no actual agreements that I could remember. It was more a long explanation of everything Adam did. It was an exposition session- and I appreciated that and what it set up for the future, but the whole diplomacy mission felt like it was missing… the diplomacy?

Then there were random encounters like Lenka the werewolf and the coup and there’s this big powerful vampire they’re dancing around each of these and he’s all “muahahah, I planned this because I am so Machiavellian! Fear me!” And everyone is in awe because he’s just so damn crafty, indeed fear him. While I’m reading and I think that this is a really really convoluted way for anyone to sort the shit out in their life. I mean this whole elaborate plan to get werewolves from America to come to Italy and happen to stumble across all this and luckily resolve things? I was left feeling less like Jacob is some super intelligent political genius and more like he just walked around saying “I meant to do that!” “Me! Me, I did that!” “This is all part of my master plan!” to every and all random event that happens around him.

When looked at from a distance, none of these plot lines are a problem: Adam and his diplomacy, Mercy and survival, the coup, the Seethe conflict, Lenka.

– but when you look close there are holes and gaps and shallowness. Which doesn’t quite work.

There is a moment of mythology mushing that is discomforting. There is a habit in Urban Fantasy to decide one culture’s mythology is all – and then sticking everything else under that umbrella. Supernatural raises up Christian ideal and includes other deities – but reduces them to lesser monsters. There’s a whole huge number of books out there where supernaturals the world over are just labelled “fae” which stomps over the actual mythology and stories of their origin cultures. Here we have Mercy dealing with a Golem and mushing a lot of Native American mythology over it – there’s a distinct feel of throwing in mythologies and getting a big whisk and mixing it up.

We do have, obviously, a Native American protagonist in Mercy whose being Native American is becoming more relevant and very much bound into her woo-woo. But not necessarily into her person. From the beginning, Mercy’s being Native American has been primarily about her magical powers than about any other aspect of her – contrast with Charles (who has a minor mention) who feels like a much more rounded character. Darren, Adam’s second is Black but only mentioned in passing. Warren another prominent werewolf in the pack, is gay which is, again, mentioned in passing (and really clumsily: “the store where I’d first met lone and gay werewolf Warren all those years ago.” It’s hard to convince me you’ve put a lot of work into making a character a fully rounded character when they’re referred to this way.”)

Once away from America the inclusion drops considerably. One of the goblins makes a couple of references that suggest he may be bisexual, or just into teasing people (which also seems to be his thing).

Because Mercy and Adam were apart we do tend to escape most of the protectiveness and possession that so characterises their relationship – there’s some, but reasonable considering Adam is terrified about what may be happening to Mercy. He manages to restrain his infamous temper and, at least, not be entirely distracted by Mercy’s situation which, to be honest, it would actually be fair for him to be concerned given the situation – it gives me some hope that Adam can be more than a ball of caveman rage. I also like seeing a werewolf pack that has also acknowledge the value of female pack members and that it’s not just Mercy’s that has become so “progressive”.

We also continue to have Mercy’s PTSD be both remembered and portrayed – it isn’t something she’s just got over, she hasn’t just been magically cured. It continues to be an issue to her, it continues to be a reality she has had to live through.

On the unintentional comedy front we have Ben with his awful Dick Van Spike accent:
“We are sodding and shagging in honey, Adam”.
That’s an actual line. An actual line. Someone wrote that. Someone actually thinks British people speak like that, any British person. Really

I think this book works excellently to set up a new chapter in the Mercy Thompson saga. I’m really looking forward to that – I just hope all the gaps are filled in before we go further and that future plot lines involving more complex, more nuanced, more involved issues than just turn into wolf and bite things. This is a new level of plotting and isn’t going to manage nearly as well with shaky moments.