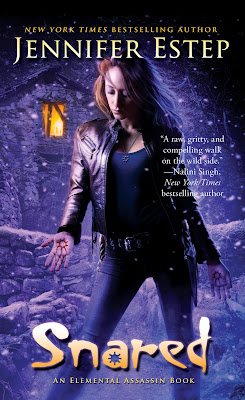 Gin continues to try and unravel the deadly and complex web of the Circle, the complex criminal group that rules Ashland – and seemed to include her mother, deeply enmeshed in its coils as well.

As she learns more, it complicates the connections still further as they learn just how deeply her mother was enmeshed – and the relationships she had then

But even with this huge mystery to unravel, Gin has more immediate crisis’s – a missing girl and a serial killer and not much time to save her.

Since Spider’s Trap we’ve had a definite change of this series. For a while I was concerned that this series was becoming very very patterned – Gin meets a big bad who has New Big Scary Magic and she must fight them and she gets captures/tortured/fights/nearly dies/win.

Instead as we have Tucker and the revelation of the Circle of secret forces who control Ashland. It could have been easy to change “random enemy with super powers” to “random circle member with super powers” and continue that same pattern again. But it hasn’t done that

Oh we have similarities – and that’s not a bad thing. I mean I say that pattern was becoming predictable but I still liked every last one of those books. The fight scenes are amazing, the action amazing. Seeing Gin being the skilled and lethal woman she is is always amazing –and not just her magic or her fighting skills – but her assassin skills; her investigative abilities and, above all, her patience. She is the Spider and it means something – she is lethally patient. And it’s really nice to see that showcased and how her rune, her label, is more than just a cool sounding name. All of these elements are here, all the elements that made Gin Blanco a character I loved and these books always stories I always picked up eagerly.

I also like that Gin’s ultimate strength is her friends. It’s the people she saved. It’s the circle of family she has around her. Gin is made all the stronger and all the more powerful by Owen and Finn and Bria and Jo-Jo and Sophia and Silvio and Rosalyn. Which is why I love that this plot, while touching on the Circle and definitely involving the Circle, also heavily draws upon another woman who has earned Gin’s respect, who Gin likes – and who Gin’s compassion demands she helps. Because it’s Gin’s social network of people she cares for, of people who will fight for Gin and support her because she’s earned their trust and respect. It’s also excellent to see her ongoing respect for so many women in Gin’s life. Her sister, Jo-Jo, Rosalyn, Sophia and now Jade. Gin is not someone who hates other women, even if the signature antagonist for so long was a woman. She has always had female friends, female family and women in her life she’s valued.

We have some racial diversity – with Rosalyn and Xavier both being Black (but only briefly appearing) and Silvio and his niece being latino (again, briefly appearing and in a service role) and Silvio is also the series’ only gay character. I don’t think his sexuality is even mentioned in this book. We have the introduction of Ryan Colson, the coroner is Black who I hope will be more commonly appearing. As a coroner added to the new focus on investigation will definitely help more.

The plot is something of a twist on Gin’s normal adventures – an actual serial killer rather than the more organised crime. Though it also shows the darker side of this crime – with a corrupt city caring less about the victims – as well as organised crime figures being more able to protect their identities and cover up their predilections.

It’s also much more of a detective story. Gin is hunting again, but the plot is less “this person is so dangerous!” and more “who is behind this!” I won’t say it’s a very detailed detective story because I think the bad guy is actually fairly well flagged quite early and we also get the classic “I’m going to kidnap the good guy so she knows who the bad guy is”. There’s also a, frankly, weird moment where Gin is spying on someone at the beginning of the book, decides there’s nothing and decides to leave. She stumples upon an outbuilding with suspicious stone-magic echoes and decides to… leave it. It’s like the book pokes me and yells “SIGNIFICANT SUSPICIOUS CLUE!” and then Gin walks away – you can’t have the character notice something to draw MY attention to it and then have her leave.

We do get some more hints of the Circle and Gin’s mother’s Eira and her history. It is a little more nuanced than I originally expected – I certainly didn’t expect the big reveal. But I’m also not sure how moved I am by it? I mean I can understand Gin’s reaction, sort of, in that her mother was such a major figure in her life and how she was almost put on a pedestal as some wonderful ideal after her horrific death in front of Gin when Gin was so young. But, as the reader, I just don’t really know enough about Eira to be that invested in whether Gin’s ideal of her is right or not. I also can’t say I’m very impressed by Gin’s convenient dream-memories. Need a revelation? Convenient dream time! Ok it can work because we’re delving into areas that Gin has ignored – but it does feel awfully convenient

But what is revealed is fascinating, brings in a lot of interesting possibilities with Tucker and Gin and the Circle and generally adds layers of nuance and complexity to a series which is generally centred more around awesome characters and a rather simple, direct, stab-things-until-they-stop-moving plot line. I like this developing world a lot. I like this whole new direction the story is taking. I like the breadth of it, the mystery of it and the clues and reveal being the new focus rather than trying to defeat the latest big bad with magic and knives.

And with Tucker we actually have an antagonist which is complex and difficult with lots of wrapped up emotions towards Gin which, again, brings another level of nuance to a story that has, in general, not been nuanced (that’s not a criticism, not every story has to be nuanced and Gin’s story has never not been fun – but it’s nice to see a new dimension added to a story that has become this long running).

Gin is kidnapped but it’s not especially violent compared to so much she has gone through – but it’s a different kind of violation which does a good job of emphasising that, in many ways, a disturbing quasi-sexual violation (let me be clear now that Gin is not sexually assaulted in this book – but how she is kidnapped is intimate and disturbing besides) is every bit as horrific as being tortured or physically abused as we have seen from Gin many times. Indeed, it would have been easy to have Gin shrug it off because she’s just so damn tough – but I like that this wasn’t presented as lesser. Of course it would have been nice to have Gin go a book without being kidnapped for once.

I’ve always liked this series, but am now doubly happy with this book – I’m happy that this series is still going strong, finding new life, new momentum going to new places and a new focus. It works and all with that same strong network of characaters that is the solid foundation of this which makes it work so well.