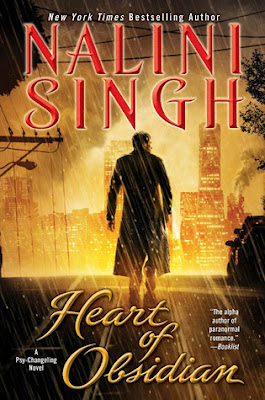 Former Councillor Kaleb Krycheck is the most powerful Psy in the world, a dual Cardinal, his power is beyond compare and all of that power has been dedicated to finding, protecting and avenging one person:

He has finally found her and brought her home to keep safe. But now he will find those who hurt her

Ah, gender roles. Because I have to talk about this every book because these same patterns keep happening – even when we have our first 2-Psy relationship, those same tropes keep happening.

Male character substantially more powerful than the female? Yup – Kaleb is the most powerful psy in history ever. He can quite literally DESTROY THE PLANET with his power.  No matter what power Sahara has, anyone has, it pales next to Kaleb who is just 2 small steps behind Kaleb

Both characters have had terrible terrible traumatic pasts. But he reacted to that by becoming cold and hard and deadly and dangerous (like Dorian and Clay and Lucas and Hawke) while she became scarred and damaged and vulnerable and broken and needing protection and healing

Bonus points that we have people hunting her and she is in danger so of course he has to be on hand to protect her from the big bad.

Also, this series has long established that Psy have no experience with physical touch or intimacy – but Kaleb comes out of the box, complete virgin but full of sexual skills because he has “researched”. Uh-huh really. And, of course, all of this sudden physical intimacy isn’t making him quail and break – just break other things to remind us how powerful and scary it is (this is exactly the same as happened with Judd. Even Sienna was less a case of “look how dangerous I am” so much as “I’m going to die and take everyone else with me”).

In any other book I’d probably look past a lot of these because their relationship has a lot of excellent things, She genuinely challenges him on top of his pillar. They use their relationship to look out on psy-net and confront their own dark pasts and forge new resolves. She both sees him as the ruthless monster he can be while at the same time acknowledging the victimhood that led him there – both not judging him and demanding he become something better. And with that, from their pedestal of power, it reflects a change for the entirety of psy-net. Their relationship and her challenges of Kaleb are reflected in the growing battle for Psy-Net and the future of the Psy race

Which brings me to the joy of the metaplot reaching a final dramatic step in this book. For books on books we have followed the excellent battle with the Psy over the continuation or fall of Silence. We have seen how essential Silence was, how desperate the Psy were, how difficult Psy can find life without silence. But we’ve also seen the damage that silence has done to the Psy over and over and the growing darkness in the psynet that has only been growing – a darkness made of violence and pain and fear. Even the reactions of Pure Psy shows a cracking of silence, as their horrendous terrorist acts show a level of fanaticism which is itself both a falling of silence and a sign of truly not understanding how people think

I love the inserts of reports from Psy around the world expressly their opinions towards Pure Psy and their actions, the diversity, the different views, the fear revealed. I loved how Kaleb, looking at everything from a much broader view than, say, the Changelings which are much more closely focused. Kaleb is concerned about the net as a whole, the future of the Psy race as a species – not one pack or local issues. The world is Kaleb’s concern and his massive teleportation power allows him to express that.

I also like the Arrow squad, the original enforcers of Silence, and their own struggle. Their complete – unsilencelike – loyalty to each other, combined with their own conflicts with silence are powerful to see. Silence was designed exactly for people like them, people who have powers that are just so terrifying, so deadly that they need to be controlled. Mixed with the wish for what their lives could be, further combined with the knowledge of the abuse they have all faced as well as the betrayal – such as how they were used as disposable weapons by Ming. The Arrow Squad has become a group unto themselves with its own internal loyalty and worries – including things like Vasic being completely run down from combat fatigue. There’s a lot of conflict in the squad that act as microcosms for the whole of Psy society

And that really works as a reflection on Kaleb himself – his conflicts, his relationship with Sahara, his own vicious ruthlessness, his wish for a real life, his own growing humanity, the Ghost, his friends – actual friendship. There’s a lot there that I really like

In some ways it annoys me a little because this is the story. Sahara herself? She seems a little superfluous. In fact, she feels like a tool, a catalyst for Kaleb’s development rather than an actual meaningful addition to the story. Perhaps of more had been based on her own powers, or if more had drawn on her relationship with Faith then it would have made her more relevant.

There was also a lot of excellent action scenes as we got to see Kaleb zoom in and use his amazing power. Admit it, sometimes there’s a special joy just seeing someone who is all that proving they are all that. I do like a well written action scene.

The racial diversity of this series continues strongly. Sahara is a woman of colour - latina. Every other POC character is a minor character – but then, except the Arrow squad, every other character is

Anthony’s head of security is a Black woma. The head of the Falcons is a man of colour, we have Jim Wong, an Asian man who representative humans, the head of the human Alliance who is a Black mn as well as the POC who were prominent in previous books. But this book I would say that Kaleb, Sahara and, maybe, the Arrow squad are the only characters who are not minor

There continue to be no LGBT characters

This is the book where the battle over silence reaches its conclusion. We have a lot of action, a whole lot of death and destruction and major culture change finally coming together. Not only does this make a book that I’ve been looking forward to for a very long time – and it also must precede an excellent turning point for the whole series. It’s time for a brave new world and I can’t wait to explore it. I’ve always loved the world building of this series more than anything – and this long running metaplot I’ve always loved so much has now made a dramatic change – and we’ve been waiting for this for so long, I love it!