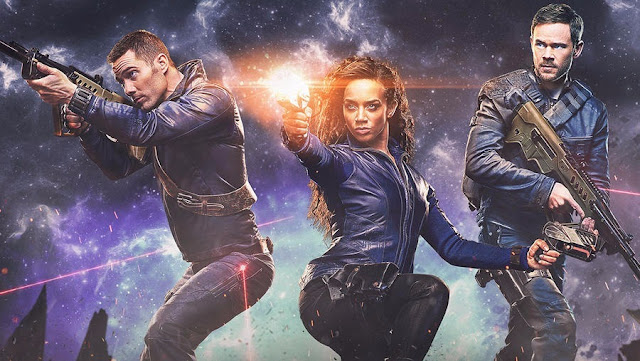 It’s baaaaack! Yes this is one of those shows that I greet with glee when I know it’s finally back with us

Last season we ended with Dutch killing the Hollen home tree and dramatically declaring war on the rest of the Hollen throughout the system/galaxy/universe/anywhere else she can find them.

The problem is that the hollen aren’t exactly advertising themselves. She and most of her team - D’avin (can I rant again about this punctuation unnecessarily in the middle of a name? I mean, it’s not like it even changes the pronunciation from Davin. There’s no glottal stop or anything), Alvis, Fancy and Pree manage to raid a hollen base and capture one of the few live hollen. Killing the Quad Hollen tree apparently killed all the Hollen birthed from it but there are still hollen around who weren’t from this system. Sadly they’re also willing to commit suicide rather than be captured alive.

This is frustrating for their plans because, to create more Hollen Tree killing black goo, they need to actually capture some Hollen alive.

Another frustration is at the RAC (bountyhunter central). Since this RAC has had a huge number of defections we have a new boss come in to take over everything and see what is actually happening. She introduces herself by being mightily unpleasant to everyone, Dutych is predictably sassy and they’ve both basically drawn lines to hate each other. Dutch also thinks she may be Hollen and is willing to murder her anyway

Ok, look - I love 101 things about this show but, despite often good anti-sexist messages, Dutch moving in a near all male world is a problem. And this looks like it’s going to be exacerbated now we have the death of Delle Sayah and Pawter and her new mission is unlikely to bring her into contact with Bellus often, if at all. To have this complete female void around her and then introduce a female character expressly to be hated is a problem.

For that matter, can we address Dutch’s idea of tactics being rage and roar - because there’s a danger of turning Dutch into a weapon by making her do very very short-sighted things. I don’t think it’ll ever get that far because we’ve already seen a lot of depth and nuance from Dutch and I get wanting to keep Turin involved, but “rawr war” is not a tactical position

Turin’s still around and, thankfully, provides some much needed intelligence and insight to Dutch’s short sighted hot headedness. Including how killing boss lady would attract attention, that a plan to find other RACs in other sectors with their own hollen trees is a good one - but pointless unless they have more Black Goo. He also points out all the defections are likely due to RAC agents who were turned into hollen and now being freed from their influence promptly freaked out and ran as fast and far as they could.

But he does have plan. He also promises intense heat and gratuitous nudity

I am disappointed. Don’t make promises you’re not willing to keep, Killjoys

Pippin appears to be a shallow, spoiled little rich boy of limited intelligence and an annoying personality. This is accurate - but he’s also a major black market trader with lots and lots and lots and lots of contacts. And Dutch wants him to use these contacts to find a “beacon” which will draw out the hollen if there’s one for sale. She negotiates by threatening lots and lots of violence. It’s effective.

So a while elaborate meeting is set up with a black market trader who apparently has the beacon. They get it, it doesn’t exactly go to plan but Fancy is there with his shiny toys to make it work until they’re picked up by a RAC border patrol squad and all imprisoned

And interrogated. LET THE SNARK BEGIN. One of these days watching these shows will ruin my job because I’ll show up at a police station and expect both sides to trade witty one liners for an hour or so.

Dutch reminds us she’s not just a combat monster with comforting Pippin before going to her own interrogation and telling the nice interrogator all about monsters and beings that hide among your friends so they can’t be recognised. Realising Dutch knows about the Hollen, the RAC hollen interrogator drops the pretence and Dutch makes an awesome speech about humanity fighting before attacking
At the same time her gang has used their nifty skills and hidden items to escape their own prison and the fight is on

At the end of it, they now have lots of black goo from dead hollen, just what they need for hollen tree killing. This turned out to be the plan all along, the beacon was kind of a fake plant as was the black market dealer and all they really needed was Pippin’s big mouth to spread the news so some Hollen would come get them and see what shiny thing they had.

Pippin isn’t upset about being used since he kind of has to admit to being a big mouth. But Dutch sees him and his contacts as a resource for the future.

Now to the obvious missing one, John

John and Dutch have been exchanging messages but not connecting - ultimately John will come to Dutch’s side if she asks, which is unfair because she knows she can’t do that. It’s all the powerful connection between them which has always been amazing between them and so well developed.

He is looking for Clara, the woman who had some major hack mods. This means she’s a cyborg and illegal in most of the Quad and cyborgs treated pretty much as non-humans. He’s trying to find her since he owes her big time and she is planning to bring down the factory that turns people into cyborgs.

So he’s tracking Clara’s arm and instead finds Ollie, another hackmod ad she has Clara’s arm and has been following information from it as well. She ends up following John as a reluctant companion since he insists on keeping the arm around while he looks for Clara

She also has a lead to as city where Hackmods are tolerated and a bar for hackmod only people. Interesting twist is the class division between “mass produced” hack mods with standard modifications and the usually better treated “specs” who have tailored cybernetics.

John is also revealed to be a normal human - a basic - which means they should kill him. Ollie negotiates for option b: mod him. Johnny is duly upset at idea of being cybernetically changed until he sees the awesome cool toys and gets a laser-cutter finger. We all know Johnny will always be impressed by the awesome cool toys.

Which follows a sleepover and John and Ollie putting their relationship on fast forward. What could they not get the actress who played Clara so put someone else in her place and then sped the relationship up by a thousand? Because already they’re whispering personal secrets (on the, not inaccurate, idea that it’s easier to say some things to a stranger) and Johnny is talking out his abandonment issues and she’s saying she can’t leave him because she has nowhere to go.

Yeah we just went from strangers to co-dependent in one episode. I’m not buying it and think it means either Ollie is going to get killed off for Manpain or we are seeing a blatant copy and paste job with no real attempt to establish Ollie as anyone other than Clara#2

The next day a guy decides to dish out some violence to warn them off hunting Clara and Johnny kills him - and cuts into his head with the laser finger - revealing a hackmod with green hallen goo.