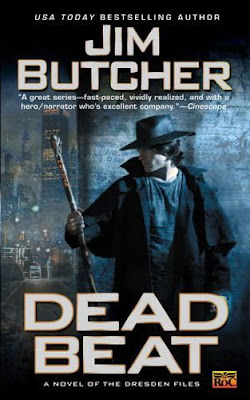 There are some new big bads in town – necromancers, some of the darkest wizards out there, have arrived and they're all looking for the Word of Kemmler. Kemmler, the greatest and most horrendous necromancer that ever lived, left his remaining knowledge in this book – a book that could bring untold power to the most evil of people.

And in addition to the Necromancers, Marva of the Black Court also wants the book – and if Harry doesn't get it for her, she's going to ruin Murphy's life. To further complicate things, Bob the skull has a disturbing past and even more disturbing secrets with Kemmler.

The war between the vampires and the wizards continues with the Wizards suffering a major defeat, the remains of the Warders must turn to people they'd shunned to try and prop up their numbers and can't offer Harry even a tenth of the support he normally could expect.

And to make things even more complicated – the Fallen Angel Lasciel has formed a bond with Harry, a bond she desperately seeks to develop through manipulation, illusion, confusion... or simple helpful bargaining. And while Harry does all he can to resist her – how easy is it to resist such power and knowledge when it could help you save so many lives?

Harry has to juggle all this and prevent a faerie god of the hunt from ripping his head off or all of Chicago may be destroyed. A busy Hallowe'en indeed.

I started this book with mixed feelings. It felt like it started slow and I was introduced to too many of the necromancers too quickly. Too much happened and I admit I floundered and I was worried that I'd remain lost or I'd just have to work too hard to follow it to enjoy it. But I hung in there.

And the epic arrived. Because holding on past that brief confusion was rewarded by the best Harry Dresden books to date and one of my favourite books in the genre. And yes, I have to repeat that the epic arrived because it was epic. Harry facing off against the Necromancers, being tempted by Lasciel, being manipulated by Lasciel – it's an epic story and half. With more epic. Did I mention the epic? Because it was totally epic.

And then Sue takes part. At which point the epic levels have not only been reached by the whole epic meter is now overloaded and broken into little epic pieces and I found myself turning each page with an excited grin on my face, almost skimming in my hurry to find out what happened next. It was one of those times when sleep was cancelled because I was not putting down the kindle until the last page had been read and it was a supreme effort of will not to reach for the next book as soon as I read the last page. It really was the best book in the series I'd read to date and if the previous books were crap they'd be worth reading just to get to this one.

Of course, it wasn't without problematic elements.

Harry tells Butters, the coroner, the truth – the truth about magic and the supernatural world and the threat he faces. And I approve of this decision. But I have to contrast that with the repeated refusal to inform Murphy – or even Susan – in previous books. I could give a huge benefit of the doubt and say that Harry has learned his lesson, he has realised that sending humans ignorant to face the creatures of the magical world does them no favours and that an informed human at least has a fighting chance. But I can't help but contrast the whole “who am I to dictate Butter's path, who am I to make the decision for him” with the way he paternalistically makes that decision for Murphy to protect and shelter her. Especially when you consider his track record with “chivalry”. He even expressly has a long passage about how much especially it bothers him to see women hurt, even when he recognises it as silly, it could do to end. I could also do with every woman in Chicago a) not being sexy and b) not being described in so much detail. It's unnecessary, it is.

There is a flip side that the head of the Wardens, Luccio, is a woman and another strong, kick arse character. Except she's another strong kick arse woman who is rescued by Harry and with all these strong kick arse women around him could Harry start learning, please? How many more Aikido mastering, chainsaw-wielding, expert swordswomen with brilliant war magic, Red Court fighting lethal women does he have to know before he stops treating them like delicate little floowers

There are a lot more POC characters sprinkled about the book. most of them bit parts, but one of the Wardens is Hispanic and he's also the Warden who is the most amusing and the most sensible and he's been promoted to high office

The ongoing erasure of GBLT characters is, well, ongoing. But we're now adding a semi-recurring joke about Harry and Thomas being gay, which only exacerbates the erasure and I could do without.


This book is one of the good ones. I'd not only recommend it, I'd recommend the series based on it alone.

EDIT TO ADD: I have decided to upgrade my review to 5 fangs on this book. Really, compared to our other books - it deserves it. I'm being unduly harsh - this book is a 5 fang book. It's pacing was very minor considering the epic within