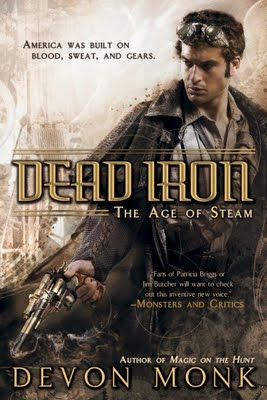 Dead Iron falls into the category of paranormal steampunk.  I really looked forward to this book when I saw that it was chosen as the book of the month by one of my Goodreads reading groups; however, that excitement quickly turned to dust, and I found myself looking for anything to do but read this book.  How do you know when a book is bad?  When you find yourself thinking after reading a few pages, hnmmmm,  I suddenly have a desire to clean the kitchen, or a do a load of laundry.  Yes, housework is more amusing than this book.

One of the major faults with Monk's work is how convoluted the story is.  First we have a werewolf named Cedar Hunt, who is considered an outsider in the small Oregon town of Hallelujah.  He has moved to Hallelujah in an attempt to forget his past. Hunt believes that he killed his brother, one night when the wolf's blood lust blocked out his ability to reason.  His wife and child are also dead.  Out of the blue, Rose Small, the General Store owner's adopted daughter tells him about a missing child named Elbert Gregor, and he decides to hunt him down.  Because Rose has told him that she believes that the boogeyman took the child, he decides to pay a visit to the Madder brothers, who seem to have a special skill working with stone.  Even though he has no connection with this child, he is willing to owe the Madder's a favor in order to secure their help.

If that were not bad enough, we learn that Hunt is a werewolf because he was cursed.  When asked what he had done to cause a God to be angry enough to curse him he said, "I walked on the wrong land.  Pawnee land. I did no harm other than to be under the wrong go's scrutiny." (pg. 193)  He then goes on to say, "Told me there were Strange rising in the land.  Told me I was to hunt them. Kill them."  Okay,  keep in mind that this is the 1800's, and that White settlers and the government are busy slaughtering, raping, and starving Native Americans.  It is absolutely problematic that the only time First Nations people are mentioned, is for one of them to choose a White man as their champion.  Has Monk ever read a history book or had an actual conversation with a First Nations person?  Somehow I doubt it.

The second character of note is Mae Lindson, a local witch. She is a White woman married to a Black man (yeah, that was very likely in the 1800's).  Like Cedar, she is not really trusted by the towns folk, though they continually buy the silk and blankets that she makes.  One day she feels the connection between herself and her husband Jeb Lindson break, and decides that she must achieve vengeance.  What she does not know, is that her husband Jeb, was murdered three times by something called the Strange in an effort to lure her away from their home, so that her blood could be used to open a doorway to another world.  Throughout the entire book, Jeb is a zombie whose only mission is to kill the thing that killed him and protect his wife.  Not only does a Black man not get a prominent role in the book, he only exists to play savior to a White woman. Anyone see a problem with this?

I would be remiss if I didn't point out that Jeb dies within the first few pages of the book and he is lynched by a creature appearing to be White.  When we consider that this is set in the 1800's, and that lynching Black men was a common place event, I think that the appropriation of this history is downright racist.  During that time period, Black men were lynched as an act of terrorism against African-Americans, to support White supremacy. Lynching was at times considered a family event, with White people planning picnics around the lynching, while their children played. The lynching of a Black man set in this time period should not be taken outside of its historical context, because doing so erases the harm that White supremacy has done to African-Americans.

In her search for justice, Mae seeks out Cedar to help her hunt Jeb's killer but he refuses, and she makes her way to the Madders.  Gee what a surprise that Cedar and Mae both end up at the Madders at the same time.  In the meantime, Shard LeFel, who is well respected for bringing the railroad to Hallelujah, is actually building creatures that are powered by blood and steam to help him kill a werewolf, a child (you'll never guess which one) and the witch.  Apparently, these deaths are necessary to help him open a doorway to an alternative universe.  Shard LeFel was banished from this universe because he had the audacity to kill his brother's son.  To help him return home Shard LeFel creates metal bodies for the Strange who's mission it is to bring death and destruction to the land.  Throughout the story we are given no idea what the Strange really are, and from small hints I am guessing that Shard LeFel is fae, but rather than character or world building, Devon Monk seemed more concerned with simply saying that's the big bad and hate him, cause I am hinting that you should hate him.

The only ism that Monk decides to confront is sexism.  Throughout the story, we are told that because she was abandoned by her parents, that Rose Small is considered a misfit.  When she shows an interest in learning a trade and becoming a Blacksmith, her adopted father makes Mr Gregor (the father of the missing child) promise never to teach her this skill.  She is made to cook and clean and has to actively work to thwart her adopted parents effort to marry her off to the first unsuspecting dupe that they can find.  The only aspiration that a woman can and should have in Hallelujah  is to get married and to raise a brood of children.  The fact that Rose actively works to thwart this and live her life, on her own terms, is empowering.  She does not do the usual spunky agency that we tend to see in most urban fantasy novels, and is easily the most well rounded and developed character in the book.

At the end of the book, it is clear that Monk has set this up to be a series, and I cannot for the life of me imagine reading a second book.  None of the characters were really developed enough to cause a reader to care about them, with the exception of Rose.  Watching them all slowly converge on Shard LeFel for over 200 pages was less exciting than watching paint dry on a wall.  The attempts to build suspense in the story, simply feel flatter than ginger ale left in a glass for a week.  I found myself thankful that I have an e copy of this book, because the trees that died to print this lost their lives in vain.  There is nothing worth cherishing about this book, and the only person I would recommend it to would be someone suffering from insomnia.