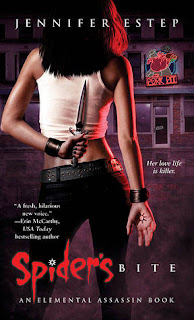 Gin, the Spider, is an assassin. She kills people for money and she's very very good at it, even in a world with vampires, elementals, dwarfs and giants – she hardly even needs to use her Stone and Ice magic, her knives and training are more than enough.
Until a job goes wrong. Her employer has double crossed her and is now out to kill her and her loved ones to continue to frame her for a death she didn't cause. Working with her remaining family and a reluctant police officer who complicates things by being both extremely hot and enraged by her previous job killing his partner, she must find out who is after her, why – and avenge the dead.
I loved this book. No, I really did though for a while I didn't think I would. The characters are very real and very well developed, Gin herself is a wonderfully deep character with a nuanced and full portrayals. She mixes the vulnerable street kid she was, her familial angst (and yes, it's another Urban Fantasy protagonist with the Tortured Past. AGAIN) her desires, her drives and being a cold blooded assassin extremely well to form a full character. I found her interactions with Finn funny and very real – and even her interactions with detective Caine, even if the sex was a little contrived.

Despite being vulnerable and pining for a lost father figure, she's a strong, capable, deadly and dangerous. While she has powerful magic, most of her lethal skills come down to her just being better than the men around her – better trained, better skilled not needing magic. She's also completely and utterly unabashedly sexual which is nice to see. She likes Caine, thinks he's hot and is horny so wants to have sex. End of – no need for twu luv (though I suspect that develops later in the series) no soul searching about being a “good girl” or anything like that (and yes, I'm tired of seeing protagonists kill 4 people then worry whether their sex lives make them a bad person) just “you're hot, I'm horny, let's get it on!”
I also love the world. It's large with a range of mystical beings and it has several surprising twists. Vampires aren't top of the hierarchy. The introduction of dwarfs and giants are fairly original in the genre. It's also resisted the urge to play with “fantasy prejudice”. Dwarfs, vampires, giants and elementals (elementals are more magical talent and you can be an elemental and human or vampire or dwarf etc etc) are part of society and they're just that, part of society. A police captain is a Giant. The leading socialite stylist is a dwarf. Vampires make up a lot of street prostitutes and heavy in the sex industry (because some can feed on sex as well) but can be in every tier of business too. This is probably the first book I've read where the supernatural is fully integrated into the world and not an alien other – it's a nice twist.
Also, as a wide world there's a lot to learn,. A lot is hinted at but the author has resisted the urge to info dump. I know enough to read the story, I'm intrigued, I want to know more – but I haven't been bored by extraneous details. I've been teased and drawn in, not bored and put off.
Social justice wise, we have a strong, independent, pro-active, unabashedly sexual female lead. Detective Caine, the city's only honest cop and extremely good at his job is hispanic. There are several POC walk on parts, enough to suggest that Ashland isn't all white – but perhaps not enough to really reflect the demographics of the city.
There are no GBLT characters, an erasure that's very much par the course, sadly. I'm also discomforted by the portrayal of an asylum at the beginning of the book – lots of drooling and gibbering. Also, since Elemental magic can cause insanity, I'm less pleased at the idea of these dangerously insane people with dangerous powers causing danger. It's a trope that the mentally ill are a terribad threat that is rarely reflected in reality.
Class wise, well the story is gritty and does show the sharp contrast between the desperate and the poor and the affluent and privileged which is nicely hinted here and there. Also in addition to poverty and criminality being linked (though portrayed as poverty forcing people to criminality rather than people being poor because they are criminal, an important distinction) it also makes equal reference to the working poor
So, a good book? Yes, definitely. I loved it. Would I recommend this book? Yes, very much so, I am beyond frustrated that my kindle died on me while I was reading this book, otherwise I could have easily devoured it in a day. A good read and I'm eager to move on to the second book. It's worth a buy, worth a read and worth a re-read, definitely one of the good ones.