Review of Raphael by D.B Reynolds 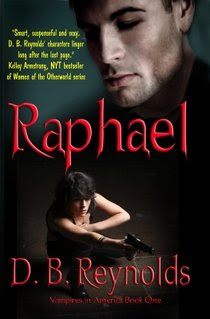 This is yet another book of the month selection from one of our reading groups on Goodreads.  This is yet another book that I would not have chosen to read because it is paranormal romance.  Unlike Love Bites by Lynsay Sands, there really is nothing to redeem this book.
Cynthia is a former police officer turned private investigator. Normally, she does things like background checks and following cheating spouses, and so when Raphael and his vampires enter her office wanting to hire her to track down a kidnapped vampire, she jumps on the opportunity to do something new and interesting. The existence of vampires is sort of an open secret socially, but even with all the secrecy, Raphael's place in vampire hierarchy is well known.
What follows is the most contrived search for Raphael's sister, while he struts around glowering and showing just how strong and masculine he is.  Oooooh.  Of course, in typical alpha male fashion, Raphael sets his sights on Cynthia, who he calls Cyn ( isn't that an imaginative pet name), because she is resistant to him, though he can smell her desire (eau de wet pussy everyone).  Finally, in the middle of a gun fight no less, they find timeto deal with their desire - yes, I said the middle of a gun fight.  I know that this may seem inconvenient, but it's perfect for Raphael who only want's to deal with women who respect themselves.  If you doubt me, check out the following passage:

He froze, staring down at the whorish display, disgusted with her, with himself  His mind conjured the image of Cyn, her green eyes filled with mingles fear and longing, her breasts swelling with every breath, hard nipples begging to be touched, her heart pounding so loud it was everything he could do not to grasp it in his hand.  The woman on the best began to sob openly, thrusting herself at him, begging him to fuck her.  Raphael backed away, realizing suddenly why he'd chosen this particular woman.  She was a poor imitation of his Cyn, but Cyn would never have debased herself like this.  He thought to warn the woman, to chasten her to have more respect for herself, but he knew from experience that his warning would go unheeded.  And besides, who was he to chasten another after his own disgusting display of lust?

His erection faded.  The blood that only moments before, had tasted so sweet now sat on his tongue like vinegar.  He zipped himself up, wiped his mouth, and spat to one side before striding from the room without a single glance back. (pg 99-100)

So, this anonymous woman wanted a no strings attached, quick sex, but somehow she has to bear his shame, because unless proscribed by a man, a woman's sexual lust is always impure.
The two women that were considered to be valuable in this story were of course White. Cyn, the woman that Raphael so desired, was saved from being a slut like the anonymous woman in the blood house, because though she only knew him for a short while, she falls madly in love with Raphael.  The other woman is Alexandra, and she seems to fall short of being considered impure because of her constant need to be saved by Raphael.  Alexandra literally exists to be the perpetual victim in this book, and if that isn't taking a page from the sexist playbook, I don't know what is.
The one woman of colour in the book betrays the White princess (read: Cyn) and she is rewarded by being thrown off a cliff naked.  When we consider the amount of violence that is regularly targeted at WOC, the caviler way in which her character is dealt with really affirms the idea that WOC have no value and that White women represent true womanhood.  Men of colour do not fare much better in the story either.  The one man of colour is a vampire, and unlike the majority of the vampires in the story, he has little power, and is basically constructed as a lay about. Gee, I wonder were Reynolds got that little stereotype from?
As I mentioned earlier, I am not a fan of paranormal romance, but my dislike of this book is really not based in this.  There are ways to tell a love story that aren't contrived.  It felt like the entire book was spent trying to force the relationship between Cyn and Raphael down our throats, and there really was no shared experience to explain the supposed bond that they had.  It is not enough to insert a vampire into a story and then claim that woo woo equals undying love.  I will never get the hours back that I spent reading this book, but I can save you from wasting your time.
Posted by Renee at 9:00 AM