Review of 'Succubus On Top' by Richelle Mead 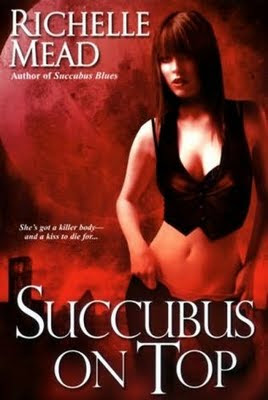 After reading Richelle Mead's Vampire Academy series, I did not believe that she would ever write anything that I would read, let alone absolutely embrace.  I read the first book in the series because a book club that I am involved in selected as the choice for the month and now I am absolutely HOOKED.  Who knew that she was capable of creating such a wonderful world.  This really makes me wonder what the hell went wrong with Vampire Academy.  Okay, maybe it's not fair to compare the two because the Vampire Academy series is YA and her Georgina Kincaid series is definitely ADULT. (yes lots of sex but at least it doesn't pretend to be anything other than vanilla)

Having promised to corrupt humans using sex to save Seth's memory of his love for her, Kincaid must balance her commitment to the Archdemon Jerome and her desire to nurture her budding relationship with Seth. Throughout the book there is a lot of discussion as to whether or not it is possible to maintain a romantic relationship with a man and not actually engage in sex.  This is an absolute necessity for Kincaid and Seth because every time she is sexually intimate her succubus drive takes over and she drains energy and life force from her partner.  Honestly, I see quite a lot of gender essentialism in this because of the constant real men need lots and lots of sexay times to be happy.  This approach also ignores that asexual people have romantic relationships all of the time.

Once again there are not GLBT characters in this book.  In a town like Seattle this is absolutely ridiculous. I would understand if the book was set in a half a horse town in Iowa but this is not even remotely reasonable for a large urban center.  The book does have a saving grace however.  An incubus named Bastien comes to town with the idea to seduce Dana, the leader of a local fundi Christian group. We are told repeatedly that Dana is not only racist, she is rabidly homophobic.  I think that it is great that homophobia was addressed in this book.  At point Kincaid says, "I wanted to argue right there that I didn't think homosexuality was a "choice" for all people, nor did I believe there should be laws about who people loved. " (pg 165) Even as Dana tries to push Kincaid in to saying that she believes that gay marriage should be banned, Kincaid cannot bring herself to support her though she knows doing so may very well risk their opportunity to catch Dana in a compromising position.  I think this really makes a strong social justice stance and is the only time I have seen homophobia so directly confronted in the genre.


Unfortunately as happy as I was to see all of the support that the GLBT community received in this book I would remiss if I did not point out a failure.  In the end, Dana is indeed seduced but not by the incubus, but Kincaid herself.  It seems that Dana is a closture.  Of course, there are people who are gay and lesbian who have enough self hate to support organizations like the fictional one Dana ran; however, the source of homophobia is not closeted gay and lesbian people, but heterosexuals intent to uphold their privilege.  I think the point would have been better made had Dana rather been straight, rather than making her a self hating lesbian. In the end though, I believe it really was a good effort to confront a marginalization in the urban fantasy genre that far too often gets erased.

In my last review, one of my complaints was the lack of people of colour.  Doug is a Japanese man who works with Kincaid at the bookstore and he is also a member of a local band.  In Succubus on Top, Doug moves out the shadows and plays a huge role in the plot.  Unfortunately he becomes a drug addict who overdoses and it is left to Kincaid to bring about justice.  If it were not for the fact that Asian men are constantly emasculated, I would not have had a huge problem with this story line.  It was not accidental that Kincaid was not called in to rescue a White man.

One of the things I am enjoying most in this book is an empowered female sexuality.  I suppose this is easier to do because Kincaid is after all a succubus but I still find it a huge relief because far too often women are slut shamed for even thinking about sex.  Even though sexual agency is a huge part of who she is, in this book we also learn that Kincaid is good at persuading people, taking charge in a professional manner as well as organizing things on the fly.  This is something that I really have to praise Mead for because when are seen as sexual, they are also portrayed as incompetent or as distinctly lacking in intelligence.  Kincaid is wonderfully rounded and filled with an agency that is rare in this genre.  With each chapter that I read I become more excited about the world that Mead has created.

Edit to Add (from Sparky):
I am not happy with the representation of GBL people in this book

We have 2 BL characters – Dana, the lesbian leader of a homophobic hate group (who forced herself on another woman), and Alec, the bisexual sex predator (who uses date rape drugs and addiction).

Already these 2 being the only representation is highly problematic – the only representation in 3 books. Both of these are extremely stereotyped and grossly damaging roles – sex predator and homophobic hypocrite. Our sexuality is again, toxic, damaging, twisted, dangerous and generally bad. There's no positive portrayal to even try to balance it.

But who wants to bring Dana down? Carter, the angel? The force of good? No – it's Bastien, the Incubus. Bastien who has got himself in trouble with the infernal authorities and he needs this to redeem himself and protect himself from their wrath he has to do an impressive, high profile job for the side of evil.

And that's a huge problem here. It is the demons, not the angels, who want to bring this woman down. Bringing her down is portrayed as a blow to the forces of good, as a blow for immorality. The very arbiters of good and evil in the world – the divine and the infernal – are happy to accept bringing Dana down as an evil act and her grossly homophobic organisation is labelled as a force of good.

I find this extremely problematic and poorly handled to say the least. - Sparky

Okay, now that I have done a little critical analysis and a great deal of fan poodling, I must say that if this is a series that you were thinking of reading, take the plunge.  The story will absolutely draw you in so don't make any plans until you are done.