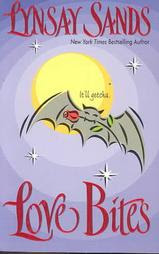 For the purposes of disclosure, I must admit that had I known that Love Bites was a paranormal romance, I never would have agreed to read this book.  I am normally not a fan of paranormal romance, and try to avoid the genre altogether.  That said, I must admit that I kind of liked the book.  Yes, it had the usual boy meets girl, girl runs away from boy, and boy and girl get together storyline.  It was extremely predictable for a lot of the book, but I still found it entertaining and when it comes to reading anything, the ability to hold my attention is extremely important.  Unlike many paranormal romance books, I didn't find myself stopping because doing laundry seemed more interesting than reading this book.
I suppose I should give you a little background now.  Etienne is a three hundred year old vampire who suddenly shows up in Rachel's morgue with a gunshot directly to his heart.  Immediately Rachel finds herself attracted to the corpse however she calms herself when she realizes that what she is thinking about actually amounts to necrophilia.  Rachel is sick with the flu and when Etienne sits up and begins to speak to her, she believes that she is having a fever induced hallucination and promptly passes out.  Days later when he arrives in her morgue yet again he burned from head to toe but this time, a man intent on finishing the job actually mortally wounds Rachel when she attempts to save Etienne from having his head shopped off.  To be clear, she intervened because she thought she sensed a heart beat coming from him.
When she awakes next she is in Etienne's home and he is faced with task of telling her that he has made her vampire rather than letting her die.  What follows is one of the most humorous exchange that I have read in a paranormal romance book ever.  With references to neck sucking and Buffy the Vampire Slayer, Rachel attempts to understand what has happened to her. Next comes a series of interchanges with Etienne's vampire family and I can tell you that in between the mushy lovey dovey vanilla sex, that the laughs keep coming.
I really wanted to like Etienne, but I found his attempts to force Rachel to stay with him to be extremely manipulative.  Rather than to help her take blood on her own he actually fed her spoiled blood so that she was be forced to rely on him for intravenous feeding.  I also didn't like the fact that Etienne's cousin gave Rachel drug laced blood to encourage sex between Etienne and Rachel.  When we consider how often women are slipped date rape drugs, this was uncomfortable to say the least.  Even though Rachel did consent and consent enthusiastically to sex the degree to which she influenced by the drugs bothered me.  When it comes to consent and sexual activity, there should never be any murky water.
The story is set in Toronto and once again there are no characters of colour or any gay characters.  Considering that Toronto is one of Canada's most multi-cultural cities this really does not make any sense.  I wonder if Sands thought that this was irrelevant because she does not include a single marker to indicate anything about the setting, other than repeatedly telling us that this story is taking place in Toronto.
The main ism that is problematic in the book outside of the outright erasure is disablism.  The big bad in this story is named Pudge and he kidnaps Rachel, in the hope that she will turn him thus allowing him access to sexay vampire babes. Of course Etienne does the white knight thing and comes to rescue her.  When the police show up, though Pudge is telling the truth about vampires they treat him as though he is mentally unstable and completely ignore what he is saying.  Later, at the station they call in a psychiatrist who again declares Pudge mentally unstable, and decides that he is a risk to himself and the population at large. Honestly, I would have much preferred to see Pudge killed off, rather than just dismissed as someone who lost touch with reality. I suppose this was easy to fall back on and it did a bring a neat conclusion to the story, however, someone who is truly neurologically typical is more often a risk to themselves than the are to others.  I also find it problematic that Pudge was wrongfully assumed to neurologically atypical was played for laughs.
Love Bites is actually the second book in the Argeneau and Rogue Hunter Series; I should have started with A Quick Bite. I highly suspect that this series will be much like Marjorie Liu's work, with the protagonists changing each story, but one general connection to time them altogether.  In the case of  Sands, I expect that it will be the fact that the vampires are all related. I am going to go back and read the first book, however, if this series becomes tedious, which I highly suspect it will, I don't know if I will continue reading the series.