Fated by Benedict Jacka Book 1 in the Alex Verus Series 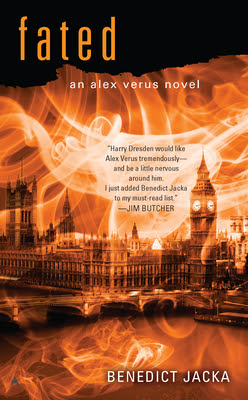 Alex Verus is a mage with a very interesting power - he can see into the future.  He owns a small magical shop in London by which he makes a living.  The dark mages are no fans of him after his escape from his master Richard and the council has little respect or use for him, that is until one day when when he is brought a very powerful key by Luna, the woman he considers to be his student.  Luna is cursed and anyone who gets to close to her risks being hurt or even dying through association.

Alex does not immediately know the purpose of the cube Luna places in his care, but when he sees into the future that a dark mage will kill him if he discovers the cube, Alex knows that he has to protect it and by extension protect Luna.  All of the other mages with foresight leave town and Alex ignores the advice to do the same, because he realizes that doing so would be a death sentence for Luna.  Alex is quickly involved in a battle between the mages possess the fateweaver.  Both sides want his skills and the one thing that is certain is that both sides will kill him when he has served his purpose.  Can Alex keep himself and Luna alive?

A mage whose power is the ability to see into the future is quite fascinating.  Because he does not have an active power, Alex has to out think his opponent.  He has a few tools like a cloak that allows him to blend into his environment but his greatest weapon is his intelligence.  I really like that Jacka did this because far too often with male protagonists, power comes from physical force reducing a protagonist to nothing but a ridiculous super hero.

The female characters in this story leave something to be desired.  Much of Alex's motivation to act is to protect Luna.  We are continually reminded that Luna has no experience with magic and that she is vulnerable.  She does help to save Alex in the end by lending him her protection power, but that does not undo 200 pages of casting her as a helpless victim.  Starbreeze who is an air elemental is the other constant female in Alex's life.  Starbreeze exists solely to transport Alex from place to place and is easily distracted by shiny objects. We never learn why she answers every time he calls or even why in the end she makes it clear that she is invested in protecting his life. Really, I could have done without the helpless servant female characters.

Though this story is set in London, all the characters are White and straight.  This makes absolutely no sense given that London is an extremely diverse city. To be clear, this happens all the time in urban fantasy and it is never acceptable.  It really would have not taken much effort on Jacka's part to make his book more diverse.  If he had spent more time on real diversity, rather than creating a world with various different kinds of magical powers I really think it would have taken this book to the next level.

The pacing of this novel is great and Jacka did a great job of keeping me on edge through the entire book.  Though I always knew that Alex could not die because he is the protagonist, I was never able to predict how he would get out of each scrape that he managed to stumble into.  Fated is truly an exciting reads, aforementioned faults not withstanding.  Those who enjoy Jim Butcher's work would probably enjoy this story.  In fact on the cover, Butcher wrote a blurb which says, Harry Dresden would like Alex Verus tremendously," and I have to agree.