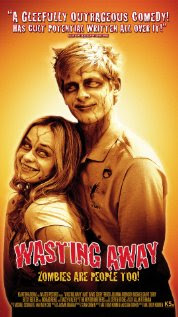 Wasting Away was released in 2007 and stars Matthew Davis, Julianna Robinson and Michael Grant Terry.  At a  secret military base the government is attempting to make a super soldier.  They inject a soldier with formula and it  turns him into zombie.  Realizing that they need to get rid of it, they label the tins of it baby formula and begin to transport it.  Along route the transport is forced to stop when a motorcycle rides into the middle of the road.

The formula rolls off the truck and somehow ends up outside a bowling alley where Mike, Vanessa, Tim and Cindy are hanging out before Mike opens the alley for the day.  Tim grabs a tin of the formula mistaking it for a keg of beer and tosses it into the ice cream maker with the smart idea of making beer ice cream.  When it comes out green, Tim tells the others that it's just the light and so they consume it quickly.  They die and become zombies but don't realize it.  When Cindy starts to complain that she is in pain, they attempt to use the phone but discover that something is wrong with it.

They head out into the street and try to approach a couple of guys that they run into but the group runs from them.  The movie switches to black and white and we see that Mike Vanessa Tim and Cindy shambled towards the group of men groaning.  Clearly what the men saw was a group of zombies and that is why they ran away.  Mike, Vanessa, Tim, and Cindy are confused until they run into Nick Steele, who tells them that he is special ops and that the population has been infected.


The rest of the movie is spent with the five of them learning that they are zombies, killing people, creating more zombies and attempting to look for  zombie homeland.  Clearly, the producer was attempting to make a cult classic with this truly unique vision of zombies.  Zombies are always mindless creatures but in Wasting Away, they are able to converse with each other, plan and organize.   This concept was the only brilliant thing in the entire movie.  Wasting Away tried to be a comedy but it was horrendously boring.

Along with being boring, Wasting Away is incredibly racist.  The zombies decide to head to a bar called "Chinks", which gets it's name from the bartender who is a "Chinaman".  I shit you not. When Mike kills a Mexican man, he actually wonders if his brains are spicy and then makes a taco out of them.  The other characters of colour are in background scenes getting a line or two.  I would much rather they had erased us altogether than use this sort of bigoted language.  This is not inclusion; it's racism.  Thankfully, they decided to leave GLBT characters alone.

We were treated to a romance between Cindy and Tim which was beyond tiresome.  The two show up at Cindy's home to find out if her parents are infected and Tim takes this opportunity to ask Cindy's father if he can date her and declare his intentions to be pure.  Really?  What is this the 1800's?  He does this btw, before even telling Cindy about his feelings for her.

They quickly realize that they need to escape humans and a bowling alley zombie asks where they will go and Mike responds, " The inland empire. Past Bakersfield they're hundreds and hundreds of acres of hot toxic land, dumping posts, military wastelands, this could be our Israel. Our own land - a zombie society where everyone is equal, separate from the intolerance and hatred of the outside world. This is my destiny, to lead us to the promised land. To find a place where we won't be judged by what we are, but by who we are".   Really?  In a movie full of a fail this was particularly bad.  Israel was created after WWII after millions died in Nazi concentration camps.  This entire speech juxtaposed the need for a Jewish state to a zombie homeland.  I am used to fuckery in urban fantasy, but this has got to be a new low. It's not ironic or funny; it's just offensive.

On every possible level you can use to judge a movie, Wasting Away failed.  I will never get back the hour and thirty-one minutes of my life I spent watching this hot mess but hopefully my review will save you the time.  I am going to give this movie half a fang only because that it is the lowest rating we have.  It's almost an insult to other things is the group to slot it in the same space.  Consider yourself warned.