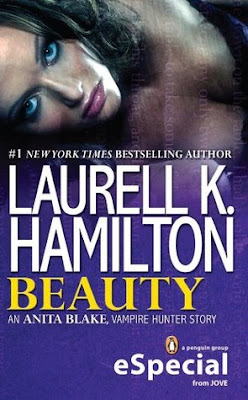 So I begin every review with a plot synopsis. So here goes:
Anita has sex.
Done.
Beauty is less than 16 pages long, according to my Kindle. The rest of the “book” is a preview of the next book and standard publisher pre-amble pages.
I don’t normally talk about the price of e-books or books in general, but here I have to - it was £2.00, which isn’t expensive in general. But £2.00 for 16 pages? Even at that price, that’s ridiculously expensive. This isn’t a short story, this isn’t a novella, it’s not even a story. This is a sex scene. That’s all it is. It’s 2 chapters (mini Laurel k Hamilton chapters) of sex scene. As an added bonus, at least 4 of those pages are wasted on endless, over-written descriptions of how hot everyone is.And how blue jean-claude's eyes are. She wrote a paragraph on those eyes. A really really awful paragraph, at that.
The sex scene isn’t original or new. It contains more desperate forays into D/S sex, but, as ever, is as vanilla as an ice cream van. The sex involves more screaming, bath tubs and a threesome and is described in pretty much the same way as every other Ikea sex-scene we’ve seen in the series. It’s not original, it’s not new – and if I wanted a hot sex scene I could google up some porn that’d be much easier, much faster, much hotter and certainly much cheaper.
Anita has a brief moment of her eternal angst about not being pretty enough, as does Asher. Again.
About the only commentary I have on the book is that Anita expresses that people judge her because they have a narrow image of what a woman should be and a man in her position wouldn’t be so criticised. This is true, and I approve of the commentary. So can we have the commentary? Not the throw-away reference, but actual exploration of this? Especially since no woman HAS actually judged her for sleeping around in the books that I can remember (as she says they have). Nor man for that matter, that I can think of. Sleeping with monsters, yes, but sleeping around? I don’t remember it. But, please, yes do explore this! Rather than having yet another useless sex scene!
I also have to question Anita’s self-description as “sexually aggressive”. Now, the ardeur is sexually aggressive, certainly, but Anita? Throughout the series, Anita has presented her ever expanding sex life as something that is thrust upon her, rather than something she has embraced and accepted.
All in all this is not worth the money. I’d say it’s not worth the time but it took me 2 minutes to read. And then a further 8 minutes to gape that someone actually sold this. This isn’t a book. It isn’t a story. It isn’t a novella. It isn’t a short story. This is someone selling the dregs the editor has cut out of their book.
And now I have to stop writing because I risk my review being longer than the "book" I'm reviewing.