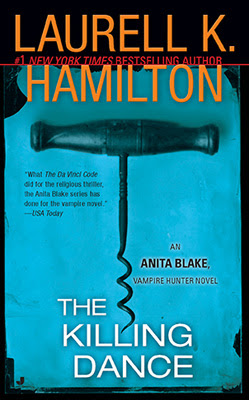 Anita is faced with a new challenge- a professional hitman. For vast sum of money, someone is paying professionals to kill her – and kill her quickly. In many ways this is far more terrifying than anything she has faced before – she has faced witches and werewolves, vampires and even faeries all with murderous intent, but never a coldly professional human killing her for business. And never one willing to use modern technology to do it.

She and Edward have to find a way to keep her alive and, for preference draw out both the hitmen and the person paying for them so they can be put out of business. Permanently.

Alas, she can’t focus on anything so simple as a death threat – not with werewolf politics playing such a large role. Tensions between Richard and his pack leader, Marcus are getting ever higher, with the pack splitting in half between the two contenders. Richard could defeat Marcus – but the only way to be the new king is to kill the old one – something Richard refuses to do. Marcus and Raina have no such compunctions and are doing their best to use his morality – and his vulnerable people – against him.

There’s also a visitor in town. Sabin is a vampire who has given up blood and has suffered from a virulent disease because of it, rotting alive. It’s hoped that Anita’s powers as a Necromancer may be able to cure him. But to do that involves Anita exploring her powers with both Richard and Jean-Claude and discovering how their magic can work together – which could also be useful in making Marcus and Raina back down.

And of course, there is the big relationship conflict. Anita and Richard go ever closer but Jean-Claude is still there, demanding equal time. Anita has to make her choice – and deal with the fallout of it when she does. To say nothing of the standard dramas of vampire politics, new arrivals and the drama they can bring.

As ever with Anita Blake, I love how we have several separate storylines yet they all come together. Anita has a busy life but you see how the threads are connected at the end. The only thing I will say is that it’s becoming expected now – an established part of Hamilton’s style that we don’t expect side-plots to be side-plots per se, but more likely a separate branch of the main plot we haven’t seen yet. Still it’s interesting, really well done, comes together elegantly with excellent pacing and the right amount of attention paid to each line. The clues are there, even if you don’t put them together until hindsight. It’s, in short, a brilliant mystery story. Well paced, information well delivered and action, tension and theme well maintained. The world building was also extremely well done, there were some lectures but always within appropriate context and never just info-dumped. Questions were answered but not over explained and plenty was shown as well as told.

I like the wordiness of Anita’s point of view, it sets them theme, adds context, world building and wonderful snarky commentary as well as having an almost noir feeling to it. It is something I’ve liked in previous books as well. But this book definitely crosses the line into over-description, especially with the men. There is too much description of how she and Richard interacts, of what Richard looks like and even of Richard’s house – I really didn’t need an itemised list of Richard’s furniture, or details like his washing up. And with so many vampires and people in spiffy clothes, there was just a lot more excessively lenthy description here that became dull and overdone. Some pages felt skippable simply because so much time was spent on Anita describing things or Richard’s angst train going round and round in circles.

There’s an interesting theme that’s ongoing about Richard’s self-acceptance and whether he could even endure Anita’s acceptance of him since he hates what he is so much. If she accepts him, when he is so awful, then doesn’t that say bad things about Anita? There’s a similarly huge conflict over Richard’s idealism. His morals aren’t wrong – but are they appropriate for his situation? And it’s all very well being willing to die for your convictions, but what about when people have supported you and rely on you for protection? What do you do to protect those you love and care about? Which, of course, also brings us to Sabin’s situation. To say nothing of Anita’s increasing willingness to kill when necessary.

While I do like Jean-Claude as a character and I do like his relationship with Anita, the foundation is shaky. I’ve said before that it’s skeevy that Jean-Claude continued (and continues) to push Anita into a relationship even though she said no. This gets worse when he threatens to kill Richard unless she dates him – and allows him equal access to her body as Richard has. Yes, it’s worded in ways around it – that Anita dismissed Jean-Claude because he wasn’t human and the only reason she allowed Richard close is because she didn’t realise he was a werewolf. That’s a valid argument, certainly. But while Jean-Claude may have a point about Anita’s biases, it still doesn’t change that she said no and the only reason that no changed into a grudging and limited yes is because Jean-Claude threatened violence. That is not ok.

And, to try to avoid spoilers as much as possible, I’m similarly unhappy that sex between them happens only when Anita is hurt, lonely and extremely vulnerable. She describes herself as broken and wounded and in pain, screaming in rage and sobbing heart broken, desperate tears. This is not the time to have sex with someone. Even if they do initiate, even if they do consent – it’s predatory, it’s exploitative. That’s when you say “look, sleep on it, if you feel the same in the morning, certainly. Now let us spend the night in comforting cuddling and eating a full tub of ice cream”.

This is a huge barrier in what is otherwise a fascinating internal debate about relationships. Anita, stepping outside the endless stereotype of what a woman should want/need, continually looks at whether life with Richard would even work. Beyond the werewolf/vampire angst, she wonders about life behind a picket fence with children – a “normal life” would actually fit her. Does she even want it? She continually looks at Richard’s life and Richard’s home and Richard’s morals and Richard’s expectations and it’s jarring how it doesn’t fit her as a person. Then she turns to Jean-Claude and sees the many ways they do fit, their morality, their ruthlessness, their lifestyles – but then she turns that back on herself and wonders what it says about her if she cannot – or does not want to – fit into the white picket fence norm.

It started in the last book and continued into this one, sometimes it’s overt, sometimes subtle, but it’s a maintained theme of Anita doubting whether all the things she’s expected to want (represented by Richard) really fit what she actually wants – and is she a bad person for wanting something different (represented by Jean-Claude).  It’s a wonderfully subtle theme and one that is pretty masterfully presented.

There were more women in this book – Catherine and Silvie (who is barred from the upper levels of the pack due to being a lesbian) but both play very minor roles. Anita is very much in a very very male world.

All in all this book has some major flaws and the writing is shakier but at the same time it maintains some excellent ongoing themes and concepts. There is depth here and nuance and a lot of fascinating food for thought. The moral questions, the life questions, questions of self-acceptance, societal expectation and images of who we want to be versus images of who we actually are. If you look for it there is a lot more depth here than you generally find in any fiction, let alone urban fantasy.