Review: Interview with a Jewish Vampire by Erica Manfred 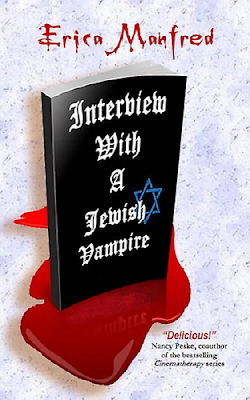 Rhoda is 41 years old, overweight, Jewish and looking for a Jewish man to settle down with after her marriage broke up and she’s had a series of poor relationships since then. Just her luck that the first man who seems interested isn’t a man at all – he’s a vampire. But at least he’s Jewish. And he’s into her – zaftig and all.

Dating a vampire isn’t easy, especially not a vampire in an orthodox community when you’re anything but. Rhoda has to work through her own personal insecurities as well, as someone who has been through the wringer a few times already, it’s hard to be so invested in someone who is so very different; Rhoda flails between worry about their relationship to desperately trying to make it work even while Sheldon has to deal with his own family and friends.

And then there’s Rhoda’s mother with the heart condition. She has to go through yet another horrendous surgery or she won’t live much longer – and at 81, that surgery doesn’t look too safe. Unable to stand the thought of life alone, Rhoda makes the leap into seeing her mother – and her friends “the goils” become a vampire and join the Golden Grandmas – a network of elderly vampire women.

But while undeath brings her mother a new lease of life and energy, allowing her to throw herself into activities she hasn’t enjoyed in decades, it also brings with it a disturbing blood lust, a hunger that drives her to the darker side of life and death. And one that leaves bodies in its wake – and the possible attention of the vampire authorities

There is a wonderful sense of Jewish culture – Rhoda and her family and contacts are all very real people who live their culture and carry it with them at all times. It’s in their language, their food, their family bonds, their history and their understanding. It’s funny without being mocked, heavy without being stereotyped. It’s used for in community jokes but never outside mockery. It’s funny, it’s witty and the characters are extremely real and natural. The characters make this book.

We also have some fascinating conflicts – Sheldon being torn between his fellow Hasids and fellow vampires, whether Rhoda, a non-kosher, non-practicing Jew would fit in with such a traditional, orthodox family and, of course Goldie, Sheldon’s golem who is determined to see him settle down with a nice, orthodox, Jewish vampire. I’m also really disappointed with how Goldie was handled, especially since she’s clearly a stand in for Sheldon’s mother. I would rather have had reconciliation rather than the future wife having to kill her future mother-in-law for the wedding to even happen.

Then there’s the big issue of Rhoda’s mother – becoming a vampire at the age of 80 (another very unique twist, vampires are nearly always young) and dealing with that sudden youthful burst of energy, becoming reborn and no longer infirm and how she deals with that – to say nothing of how she reconciles her energised, youthful feeling with an 80 year old body and how people treats her. And then there’s the pesky issue of blood addiction, of wanting to kill humans and even doing so and justifying it as “they’re bad people.”

Unfortunately, while we do look at all of these, they don’t get nearly as much attention as Rhoda’s insecurities and relationship angst which dominates so much of the book. Rhoda is a 40 year old woman who is overweight – both are damn rare in Urban Fantasy. And Sheldon loves her because of these traits, not in spite of them. Rhoda has also come out of an unpleasant divorce and had a series of very unsuccessful attempts are relationships. As such she is quite insecure – and very human about it. While I didn’t find it an endearing trait and wasn’t particularly enjoying the times she worried and fretted over whether Sheldon was into her or if he had left her, it was very natural and very human and made Rhoda a strong character. What did derail me entirely was her finding a book of 1950s style “rules” and deciding she would try and follow them.

I was frustrated that we had these real and fascinating points of conflict that could have been analysed in far more depth but we spent much much more time on Rhoda’s insecurities and fretting. I felt that the true gems of this book were eclipsed by some very standard relationship angst.

I do like pop culture references in books – it shows they are actually grounded in our world and not in a fantasy world with no vampire fiction ever. It gives it more presence and context. That being said, there’s also too much of a good thing and you can go from “pop culture references for setting and “this author is a major Twilight fan”. I liked that vampire fiction was referenced but there was too much Twilight and bordering on that for True Blood.

This book has some GBLT characters. Unfortunately. There’s Hedwig and her group – the book completely conflates trans people with gay men and cross-dressers. Hedwig is consistently referred to with female pronouns, which is good, but every time we see her or one of her friends we also get a description of how tall and bulky and muscular and masculine they are. In fact, despite the many trans people (or crossdressers or drag queens – I really can’t tell who is supposed to be who because they’re all conflated) there, they’re all massive, muscular and “manly” and always have that pointed out. And we have use of the slur “tranny” which really, really shouldn’t be there. And I’m all for vigilantes who beat up gay bashers, but not when they’re called the “Tranny Police”. No, really, no.

They go to a gay club full of “crossdressers” (again, no clue if this is cross-dressers, drag queens or trans people) or half naked men – the two flavours of gay men apparently = except “gays” is usually used instead of gay men. In fact “the gays” as a homogenous group is used commonly. And we have lines like these:

“Gay boys, of course,” I said to Hediwg. “They would see Mom and Miriam as trophies – as the ultimate fag hags.”

“Mom always did go for gay guys and vice versa. She had a very campy way about her.”

“I’ve always liked the gays and they like me.”

GBLT people managed to fill in as both completer strangers who were willing to risk life and limb to help Rhoda and the villains. I think it was a genuine attempt at inclusion but it went so very very wrong.

We have a few POC in passing but not in any major way – mainly side characters. And we do have some unpleasant references (the Middle Eastern guy she said would make her nervous on a plane.)

All in all, it has some real gems. But there’s about 10-20% of the book that needs completely excising or re-writing (any part with Hedwig and co) and I’d love a strong shift of emphasis. As it is, the gems I love about this book are sadly swamped by a lot of angst, a lot of rambling insecurity and moments that, frankly, make me cringe. Still, it did make me laugh and I did enjoy it – but I feel it lacked its full potential.

Reviewers Note: A copy of this book was provided by the author for review