Review of Legacy by Jeanne C. Stein Book of the Anna Strong Series 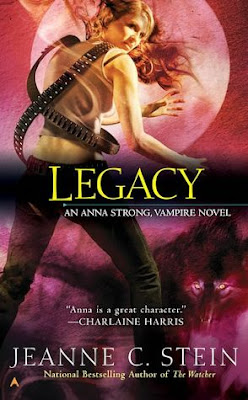 Anna has now been a vampire for about six months and the riff between her and chief Williams at the end of the last book, has lead her to believe that she will finally be able to live her human life. Gloria, her partner David's girlfriend, seems to exited his life, thrilling Anna.  Trish, the young girl that her parents believe to be their grandchild, who we met in Blood Drive,  has settled into their family.  Only Anna knows that Trish is not a blood relation, but she keeps the secret because she recognizes that her inability to age, means that her parents will need a child to dote on when she is forced to exit their lives.

Well, when things are that perfect, they certainly cannot remain that way for long.  On yet another trip to Mexico to feed, because Anna still refuses to get a human partner, she runs into a largely female werewolf pack. Culebra recognizes the danger immediately and attempts to get Anna to leave, but before he can get her out the door, she runs into Max, her ex boyfriend with a female vampire.  Anna is immediately pissed, and he tells her that it's not that he can't get passed what she is, but that she lied about it for so long.  On her way to the door, Anna comes to the attention of Tamara, who instantly challenges her and has to be called off by Sandra, the alpha of the pack.  Anna is immediately filled with lust for Sandra and is confused because Sandra is a woman.  She begins to wonder if Sandra is using some sort of magic over her.

Gloria makes a reappearance in her life when she shows up claiming that she is being blackmailed by her business partner.  It turns out that Gloria hasn't exactly been faithful to David.  When Gloria is accused of murder, Anna jumps into the investigation -- not because she likes Gloria -- but because she does not believe her capable of murder.  As part of her fee, Anna demands that Gloria cease all contact with David immediately.  For his part, David is hurt by the betrayal and lashes out at Anna repeatedly.  Matters are only made worse when Tamara meets David and he ends up scheduling a date with her.  David still has no idea what Anna is, and worse yet, one bite from Tamara and he will become a werewolf.  Anna must find a way to break this date, without David learning why, and without jeopardizing her relationship with her.  The reasons for her issues with Tamara are justifiable, but her continual negative commentary on Tamara's performance of femininity are not.

Despite having Trish in their lives, Anna's parents are still not happy with her choice of career. When Williams arranges for them to inherit Avery's vineyard in France, they start making plans to move, with the expectation that Anna will give up her life and move with them. Anna has to figure out how to tell them that her life is in San Diego.

Avery, the vampire is back and having inhabited the body of Sandra, he is determined to seek revenge on Anna.  When Anna turns to Frey, the werepanther for help, she finally meets his new girlfriend and of course resolves to investigate her background because they do not take a liking to each other. The only female that Anna actually has a good relationship with is Trish.  This makes Anna yet another in a long line of female protagonists in this genre, who has terrible relationships with women. The only time she seems to have a conversation with women, with the exception of her mother and Trish, almost always revolves around men.  If we were to apply the Bechdel Test to this series, it would most certainly get an F.

Stein, has also returned to her all White and all straight world.  We get a cursory mention of Culebra at the beginning of the novel, but beyond that, people of colour are absent. It is further problematic that Culebra is a weresnake.  Why is it that the man of colour is a reptile, while all of the other White shifters have been werewolves, were panthers, etc.,?

I keep waiting for this series to go somewhere and with each book I become more and more frustrated. Anna is not developing as a character.  She is prone to quick bouts of rage, she is antagonistic anytime there is another woman in the room, and she shows a stunning lack of maturity.  The constant questioning of her attraction in this book adds a level of homophobia to the story, which stands out particularly because Stein has once again chosen to erase GLBT characters. Anna just seems to float back and forth with no real purpose throughout this novel.  She is acted on, rather than acting herself.  It doesn't help that David's rage is absolutely unreasonable.  In times when he should have legitimately been upset he has been quiet, thus making his sulking and sniping now unbearable.

This series started out rough around the edges but it was interesting and entertaining. Now that I have reached the fourth installment, I am ready for it to end.  Bringing back Avery as an antagonist really feels like Stein simply ran out of ideas and so she recycled a character.   If you are content to simply meander along with no direction, then and only then, is this the book for you.  It's about as exciting as watching paint dry for a few hours and while I have read worse, that certainly is no reason to pick up this book.