Review: Moon Over Soho by Ben Aaronovitch, Book 2 of the Rivers of London Series 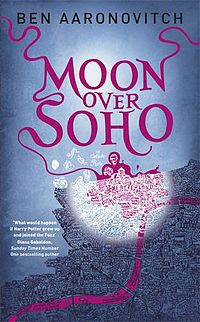 Peter is back in another magical mystery in London. With Nightingale recovering from his bullet wound, Peter must pick up a lot of the slack on his own. And there’s some major events that call for his attention.

The discovery of vestigia on certain bodies points to a supernatural reason for the death of a large number of jazz musicians not just in the present but going back through history – and something that touches very close to his own life and family.

Or the series of men found with their penises ripped off – which in turn leads to another magical practitioner in London – perhaps even a whole cabal of them. It’s a discovery which leads to far more magical history and, more frightening, a true look at the extent of dark and dangerous magic in the wrong hands. We also see how it connects to London’s own underworld and corruption in the police.

Add in Lady Tyburn’s ongoing antipathy, Molly’s moods, a whirlwind love affair, his father’s musical come back and Leslie’s recovery and he certainly has a lot of balls to juggle

Reviewing this book is difficult for me, simply because I’m sorely tempted just to write praise after praise. It’s especially difficult after reviewing the first book because everything that book got right, so did this one. It’s a great sequel for building on that foundation and continuing the plot and the world development.

The first thing I like is that it is a continuation of the last book, the canon hasn’t reset and a lot hasn’t magically happened in the downtime. Lady Tyburn still hates Peter. Leslie hasn’t been magically healed and nor has Nightingale. Which is very surprising in so many series where people take a bullet wound then next episode/book are right as rain with nary a twinge.

We have another wonderfully real feel to London. The author is a Londoner and it shows in every word. The setting and theme are such that you could almost be there. The humour is constant, dry, wry and wonderfully snarky. You will smile. You will laugh.

The story itself twists back and forth and brings several plot lines together and they come together really well while still being separate. Sure Peter connects them and his connecting brings the storylines together. The depiction of the evil wizard is both frightening and really well described –the magical fight was epic yet the discovery of his den was truly and utterly horrific and carries the full level of that horror in the description. It was really well written and disturbing. The other storyline with the jazz musicians was a wonderful break in between, lighter but still vital and very very personal to Peter with his personal history. It also didn’t require you to know about jazz to follow, but you could feel the passion behind their music.

Peter is a wonderful character – his experimenting with magic to Nightingale’s endless frustration is amusing and innovative. The way he interacts with everyone, including his family (and he’s an urban fantasy protagonist with powerful family bonds), is both fun and real. He’s not perfect, he makes mistakes and he’s not a wunderkid – he’s also not spunky - he listens to advice and, usually, takes it and gets himself into scrapes in a funny (and reasonable) manner, even if they do end up touching the farcically amusing because of the sheer enormity and weirdness he’s dealing with. He fits this story perfectly and he’s an extremely real character.

He also, unlike so many detective/mystery novels, actually has a life outside of his job and even has fun! I did spot the big issue in his relationship almost from the very second it started. Part of me thinks he was a bit blinkered to miss it or consider it (well he did have a moment of suspicion) but at the same time, he’s hardly the first person to be a little blinkered about the person they’re in a relationship with.

Again, the police portrayal was excellent – not just a great knowledge of procedure and practice but also acknowledging the flaws, limits and even corruption of the police. It wasn’t done to try and raise the profile of the magical investigators who are so much more skilled than the silly mortal policeman, but it was a genuine, unflinching and unflattering view based on strong, stony realism. It was a real police experience, neither exaggerated not glamorised.

In addition to the real world, the magic system is also fascinating. The use of forma, the way magic works, the discovery of more depth of magic and the clear history of the magical societies that is being slowly revealed is enough to keep me reading on its own.

The POC in this book are, again, excellently portrayed. They lack stereotypes but have a full sense of culture, they are diverse form a variety of backgrounds and show awareness of community and personal issues (like black women’s hair, for example). We have a full spectrum of London diversity – racial, ethnic and religious which is so refreshing to see after so many very whitewashed Londons.

Another excellent part of this book is that it actually uses “white” for descriptions. Usually when a book describes people it doesn’t describe the race of white people – so I have read books before that have said things like “this boy and the Asian girl. That man and the black woman.” The boy and the man didn’t need their race describing because there was an assumption of white default, i.e. if we don’t describe it white is inferred. This book doesn’t do that – if someone is described by race then they’re described by race – including if they are white.

The character is mixed-race and still fully connected to his heritage, culture and family while also being truly connected to London. He also has an awareness of racial stereotyping and attitudes without at any point the book feeling like a PSA or a lecture or and Aesop. It’s all woven delicately into his character and into the story

I love the female characters in this book, even if we centre around Peter, there are strong, capable women around him – who are sexual without being shamed and in control without being dictators. I look forward to Leslie coming back, especially since they haven’t magically healed her disfigurement after the last book -  especially with her set up pretty strongly as Peter’s long term love interest.

It’s a review why I keep scraping the barrel because I need to say something critical and I’ve got nothing. Yes, me, the big Unfun Sparky of Nitpicks and Meanness (according to some) can think of nothing bad to say.