Review of Dead on the Delta by Stacey Jay: Book one in the Annabelle Lee Series 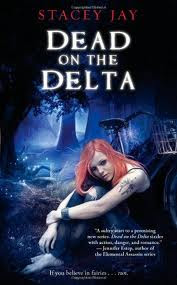 Dead on the Delta is set in a small Louisiana town, in a world in which the fae exist.  Unlike other fae stories, Jay does not actually allow the supernatural to become characters in her story.  The fae in this case have mutated and survive on human blood. One bite from a fairy can kill instantly, but in most cases it leads to insanity. Jay is not shy about using ableist language to describe this. "For seventy-five percent of the human population, Fey venom leads to insanity, with a slow build to batshit crazy that makes syphilis look gentle by comparison."[page 14] All surviving towns in the south are surrounded by iron gates to keep the fae out and people must travel in completely iron covered vehicles.  There is a percentage of the population that is immune to fae venom and that is where our protagonist Annabelle Lee comes in.

Annabelle Lee of course has the tragic past that we have become accustomed to for urban fantasy protagonists. A night of partying with her sister leads to her sisters death from a fae bite.  For some reason, she holds herself accountable for her sister's death.  Annabelle has no relationship with her parents because they always favored her sister and supposedly would have preferred her death.  None of this by the way reads at all realistic. Annabelle is also a drop out from medical school and she has a massive drinking problem, which she is in denial about.  Her job is to pick up fairy droppings and investigate fae concentrations because she is immune.

When we meet Annabelle she is collecting a body that has been left out for the animals to destroy.  Though she is told by Cane, her police officer boyfriend to stay out of the case, Annabelle quickly becomes involved. The tension escalates when her ex boyfriend, now a member of the FBI comes out to investigate the murder.  To make matters worse, Annabelle is attacked by an invisible man. She knows that no one will believe her if she tells them.  Her body is also beginning to change and she finds that she can move things without touching them.

This book is 270 pages long, but it felt like it was well over 1000. Jay spends far too much time dumping info at the start of the book, and much of it is irrelevant to the story.  Annabelle is anything but a sympathetic character, though she is clearly suffering from PTSD after watching her sister die and the deaths that she saw once the mutation occurred. Annabelle sees herself as a true minority.

The ratio of black and Hispanic to white in Donaldsonville has settled in at around ninety-eight percent to two, confirming that a pasty redhead like me is the true minority.

It's statistics that I would be dating a black man;it's good fortune that I'm dating a gorgeous black man who cares about me and makes the best jambalaya I've ever had.  [page 16]

I am not all pleased with the idea of a White woman as a minority, as it suggests that she is in a position to be oppressed, which she most certainly is not.  I am further troubled that despite being a supposed minority that Annabelle actually has a Black boyfriend and never ever discusses race with him at all.  You cannot have an inter-racial relationship without discussing race no matter how enlightened the White partner is. I further find it problematic that Cane, also had no problem using questionable police tactics.  In the real world, a Black man is far more likely to be set up by the police than the other way around.

There is a GLBT character in this story who of course Annabelle has to save because he has been wrongly arrested.  Fern it turns out deals with an illegal drug created out of fae feces.  Fern is the bff who is of course catty as hell.  He continual refers to Annabelle as slut for a term of endearment.  The fact that Fern is the only one to act this way clearly makes his entire character a trope. Would it have been that hard to write a gay man who wasn't a part of a cheap stereotype? Jaye also uses homophobic language in this book.


"So you're covered in cellulite under those dykey clothes you wear?" [page 58]

This line is said by Fern.  Putting dyke into the mouth of a gay man does not suddenly make it appropriate.


"You were in the swamp yesterday and you're that faggot's best friend." [page 170]

In this case, the slur is used by a woman who is high on drugs.  It is not countered or even acknowledged as problematic.  I suppose we are meant to be fine with its usage because of who it is said by.

Even if this book didn't have the continual social justice fails, it simply was not an interesting read.  The story just seemed disconnected and never felt like it was moving anywhere. I actually struggled to keep reading it. As I said earlier, the excuse which lead to Annabelle's involvement with the murder was thin at best.  The clues which lead to solving the murder were ridiculous.  The book read like a story being thrown together with no forethought or planning whatsoever.  From start to finish, there is no reason to invest in a single character in this novel.  I have certainly seen worse writing, but seldom have I come across something so scattered.