Review: Wicked, the Life and Times of the Wicked Witch of the West, by Gregory Maguire 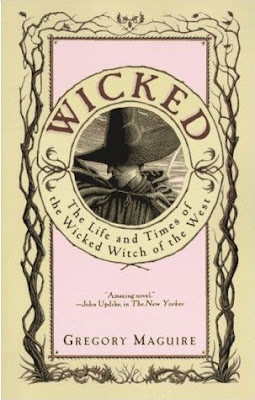 It is a story of the Wicked Witch of the East’s rising up against that dictatorship, before her reign was brought to an end by a very badly timed farmhouse.

It’s a story of the Wicked Witch of the West’s childhood – of her growing up with the stigma of her green skin and her devout father dragging them to the most obscure and marginalised corners of Oz. Of her school life, her determination to learn and rumination on the nature of humanity and evil, of the friends and allies she made.

This is a story of the Wicked Witch of the West campaigning against the oppression of the Animals, of facing off and fighting down the plots of the Wizard – and finding love along the way. And having all that crash down and seeking redemption for what she left in her wake.

In short, this is the Wizard of Oz, but from an angle unimaginable from the film.

This story raises a lot of very deep questions and issues – what constitutes sentient life and humanity and where do we draw the line. What is terrorism and what is a freedom fighter. The issue of collateral damage and the issue of refusing to face injustice for fear of the fall out, ordered dictatorship vs revolutionary chaos, autocrat vs theocrat, the nature and value of apology and forgiveness. And, always, the issue of what evil is, where it comes from and what causes it.

The problem is that, as the book passes through each stage of the Witch’s story, so too do we abandon each set of questions raised. Rather than delving into them, they’re raised, the Witch ruminates on them somewhat, and then we tend to pass away from it before bringing it to a decent conclusion or hefty examination. The questions are raised but could use more development before moving on to the next one. Sometime the questions raised are barely even touched upon (such as the nature of evil) and because we don’t have any analysis – instead the whole scene seems unnecessary and superfluous (like the adult Elphaba dropping in on Avaric and staying for dinner. Or going to see Boq and his family – in theory these scenes have been added for more philosophical questioning but because the questioning and development doesn’t really go anywhere, it feels unnecessary).

Writing wise, I didn’t find it an easy read. Elphaba spends a lot of time – especially in the latter half of the books, navel gazing and thinking. There’s lots of internal monologuing and musing and chasing their own thoughts round in circles. It doesn’t flow very well, is often repetitive. This is especially true because there’s just so much there. So many themes, so many questions raised, so many plot questions raised to be left hanging for our own interpretation. This isn’t necessarily a bad thing but there are just so many of them that it’s confusing, it’s difficult and, in the end, work. With the question of Yackle, the Time Dragon, the old headmistress, Elphaba’s parentage,  the wizard, his book and his potion and their nature, the shoes there was just so much there, so many questions, so few answers and yes it makes you think and consider, but it’s also tiring.

I felt like it was a book chock full of meaning and nuance and metaphor and symbolism – overflowing with it, completely stuffed with it. And it made it tiring because either everything had to be teased out for nuance and analysis and meaning or you just had redundant scene after redundant scene. This isn’t a book you can kick back and relax with, this is a book you need to slowly digest and pay a lot of attention and thought to. Which isn’t a bad thing – it’s a different kind of book because of it – but I do think it is overloaded with its subtle themes and metaphors and undercurrents.

I think, in some ways, the book is split in 2. In the first half we have a lot of issues raised, but it’s balanced. Elphaba grows up, goes to school and then runs to the emerald city. We have major issues with the Animals, the Wizard, the conflicting religions, the conspiracy of the headmistress, the nature of evil, terrorism, revolution and a whole lot more. There’s a lot of the questions and metaphors but there’s also a strong plot and an awesome character – Elphaba is driven, dedicated, determined. She is hurt from the way people treat her, but, at the same time unwilling to let it stop her. She’s idealist, sometimes naïve and, ultimately drives her own story and her own world.

Then we have the incident in the Emerald City, which I won’t spoil, but it derails both the story and the character. From them on, Elphaba becomes a character that the plot happens to rather than someone who drives it. She drifts to the West and stays there out of deep seated, but directionless, guilt. She drifts occasionally from place to place where other people are doing things – Glinda, the Wizard, Nessa – and occasionally to other people who are also doing nothing Avaric, Boq, her father – but at this point she doesn’t actually do anything and isn’t really involved in any plot. She’s drowning in angst, twisting in her own thoughts and ruminations but things are happening elsewhere, to other people, in other places – not in this book, not to Elphaba. At this point a story I was enjoying and intrigued by with so much depth and examination and questions still held together by a strong plot and interesting twists, just ends up with a series of questions, philosophies and metaphors strung together, with some vague plot kind of limping along side it. The questions stopped being a part of the story, and completely replaced it instead.

Inclusion-wise, we have several POC. The problem is that most of them end up dead and while they are alive they are viewed as savages and barbarians – and prejudice against them is regarded mildly as “snobbery.”  The flip side is that, in a book full of rather unpleasant characters, the POC tend to be some of the very few that are genuinely decent people. What is frustrating is that we have this very open, obvious prejudice that goes largely ignored, yet we spend considerable time discussing fictional prejudice and the action of systematically marginalising communities.

While Elphaba is a strong character, it’s hard not to see her as being punished for being sexual, especially since the only woman with a Happily Ever After seems to be Gilda – the heterosexual, monogamously married. Elphaba, Samira and her sisters (who Samira proposed as being part of a polyamorous state with her husband) and the adulterous Malena all suffer. Still we do have a powerful female princess with concubine-husbands which is a definite twist over what you normally see.

We have a disabled character in the form of Nessa who does develop interestingly – she goes from being highly dependent to finding her own individual strength and as much independence as she can. Yet her actions also result in her eventually being considered “wicked”, her fate and her being considered utterly unattractive to men despite being a beautiful woman (though this is something she, herself comments on and criticises). I do actually like Nanny, despite often being confused and caustic, she is also the first to assert the humanity and capability of Elphaba and Nessa in the face of prejudice.

In total, this book has a lot of depth, it has some amazing twists and it raises a lot of questions that can make you think for a very long time. And for half the book, it was a hard read, but it was a deeply rewarding read – it was worth the effort by far. After the Emerald city, things spiral and I had to struggle to finish it, though, which is a shame because it had immense potential from the beginning  and was a truly astoundingly complex, nuanced and multi-layered book