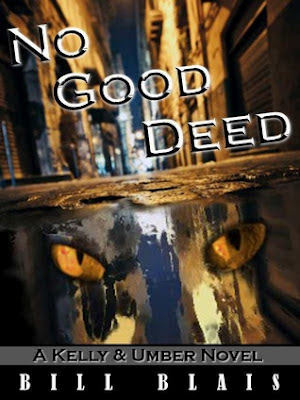 Kelly McGinnis was the typical suburban mother of two with a husband with Muscular Sclerosis.  On the same day that she was laid off from her job as an administrative assistant, Kelly discovered the existence of demons when interrupts what she initially believes is a case of police abuse.  It turns out the man who had claimed to be an officer was actually a member of a hyper secret demon hunting group.  When Denis, the leader of the group offers her a job, she is doubtful at first but with mounting medical bills and uncertainty in the job market, Kelly decides to give demon hunting a try.

The discovery of demons it turns out is only the beginning of Kelly's revelations.  To even begin to conceptualize how the world is ordered, she must begin to consider outside of her previous narrow Euro-centric point of view. What if the hell of Dantes Inferno exists along with several other versions?  What does one do with absolute evidence of evil but no proof of divine good?  If there is no evidence of a divine good then who do we define what is bad.  Kelly is forced from her modernist way of thinking to consider that perhaps the world really is both/and rather than either/or.

Having a husband with a disability makes medical coverage and absolute necessity for the McGinnis family and so when she is told that the group which she has joined is doing harm rather than good and that demons are not necessarily evil but acting out their nature, Kelly must weigh the needs of her family against doing the moral good.

There are a lot of large questions explored in No Good Deeds but if you have already taken a first year humanities course then you have covered all of this already.  Though Kelly was new to the concepts and questions raised, much of the time, the conflict was presented in such dry prose, I wondered whether or I was reading a boring college text or a fantasy novel for entertainment. The moments with her family were meant to add a lighter side to the story but they were so cloyingly sweet that it was impossible to see their interactions as normal.  Everyone in Kelly's life seems to live to support her.  Her sister is practically at her beck and call for her babysitting requirements and this is justified by Jen repeatedly saying that she has no life.  Kelly's interaction with Shawn, her husband, is just as ridiculous in its perfection. A supportive partner is one thing but anyone in a relationship for any length of time is aware that there are moments of irritation and even small inside jokes between partners.  None of this occurred in the book and instead we were treated to night after night on the bus cuddling over ice cream, while Kelly angsted about lying to Shawn about her new job.


It is rare when we see disability in this genre, however this portrayal was not positive.  Kelly constantly nagged and parented Shawn instead of allowing him to manage his disability as he saw fit.  This includes questioning the medication that he chooses to stay on and commenting each and every time he lifted anything heavy. When Kelly is forced to get in shape the reader is again reminded that this is something Shawn cannot do.  I would have preferred an empowered Shawn rather than one who existed to consistently prop Kelly up.

What I did like about Kelly is despite the fact that she was told consistently about her weight and getting in shape, she made it clear that her 165 pounds was absolutely natural for her.  We learn about her history with bulimia and how fad diets have harmed her over the years.  I think that it was good that Kelly was able to stand up against the fat phobic bullying; however, the concerns of the group were not in the least bit unfounded because, prior to joining the group, Kelly was an administrative assistant.  The rest of the group is in top physical shape because they have to be and Kelly's lack of conditioning actually places their lives in danger.

Blais decided to include a magical aborigine in the story.  He existed solely to chant to create portals for the group to travel from place to place.   We learn nothing about his background other than the fact that he is from Australia.  He is supposedly vital to the group and yet Blais spends no significant time on him and instead, we are treated to conversation after conversation about Kelly doing this job while being a mother.

No Good Deeds, is the first novel in the Kelly and Umber series and you would think that if Umber were really to be understood as a significant character that he would have been introduced before 3/4 of the story was complete. We learn that he is a succubus attempting to save his mate and Kelly feels compelled to help him because she identifies with him.

Blais sought to examine concepts that are rare in urban fantasy the problem was his execution.  None of the characters felt real and at times the story was downright convoluted.  The fight/action scenes were an absolute chore to read and I had to struggle not to skip entire passages.  I wanted to like this book but it just missed the mark. It felt more like studying for a test than an entertaining break from the everyday.

A copy of this book was obtained from the author for review.
Posted by Renee at 3:00 PM