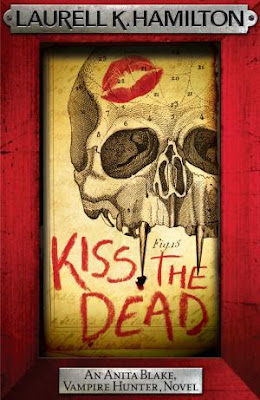 On the plus side, this book managed to get past half way before the sex scenes started. Ok, once they started they were pretty much chained, sex after sex after sex, but we did manage to go a full half book without unnecessary, excessive sex scenes.

On the minus side we didn’t have much to fill in the gap. The overall plot is a group of vampires who think they can live without a master and they’re being ornery about it. But this plot is a pretty minor point. We start with one battle scene and clean up that lasts for 30% of the book – nothing is developed or even introduced there. It’s just 30% of fight followed by policey-type things and then later in the book the plot raises its head, waves, and then goes away after, oh, a paragraph until the finale when you remember that there WAS actual plot there – and that tops off the last 10%. Well, not even that.

The rest of the book? Angst, issue, angst. Asher’s angst over everything. Anita’s angst over Cynric being 18. And lots of other really pointless relationship angsts between side characters we barely know (what is frustrating is while we’ve been having new characters introduced left right and centre there are apparently new wereleopards in town – Anita’s core animal group – and we don’t even look at it).

But the main content of this book? Filler. A lot of it down to the really drawn out writing – everything is ridiculously over described, the same conversational points are repeated with different actors and Anita chases her own internal monologue down the same rather tiresome rails. In one moment of almost issue exploration Anita considers whether she is a monster and what that means – both supernaturally and morally. Then she has a conversation with Larry where he accuses her of being a monster. Then she has a conversation with Zerbrowski where she says she isn’t. Nothing’s developed beyond Anita’s first internal musings, we just go round the ride 3 times. And while I’m very happy that vampires aren’t considered the same as humans, which is a common problem with urban fantasy (especially when it comes to appropriation) at the same time, her “end justifies means” was very broad.

But the main reason I say filler is the huge amount of Chekhov’s junkshop we were treated to – in fact, some of them I’m going to paraphrase below because I can resist the sarcasm no longer:

Anita: Why hello there bit part police officer, you’re not going to play any role in this book?
Bit Part: nah, I’m just a walk on side character
Anita: Great! Let me describe you in excruciating unnecessary detail!
Bit part 2: And me!
Anita: why yes, Let us waste 3 paragraphs unnecessarily describing you as well!
Bit Part 2: Sure, but I have some relationship issues, complete stranger Anita, want to discuss them in the middle of this crime scene?
Anita: Why yes, yes I do. Let us spend 2 pages discussing your relationship with your girlfriend because this is totally relevant to the story.

Anita: And now I will telepathically talk to Jean-Claude across the city
JC: hello, ma petite
Anita: Hush JC, you’re interrupting my unnecessarily detailed description of your clothes
JC: Oh… finished yet?
Anita: Not yet. Almost. Working on it. Now working on the eyes. There, done.
JC: Can I talk now?
Anita: So long as you keep it brief. This plot thing is getting in the way of my unnecessary descriptions.

Anita: *on the phone now* hey, lover no. 9775 how are you?
Lover 9775: Great, but there’s no way the reader will remember me with all these characters
Anita: That’s fine, even though I’m on the phone I’m going to describe you in excruciating detail – I’ve just spent 2 lines on your hair colour alone.
Lover 9775: Do you think that’ll be enough?
Anita: I’ll include a quick species designation and your own personal angst issue. Some of them may remember you
Lover 9775: cool. Hey why are we on the phone again?
Anita: I saw that plot thing getting a bit too close, I was worried.

New character Brice: Hey I have something big I want to discuss
Anita: Sure, but let me spend a while describing you first…
Brice: Ok, well…
Anita: NOT FINISHED! You have pale brown hair. This calls for a full paragraph and a pointless childhood anecdote to describe it… almost, ok done.
Brice: ok… see I’m an 8 year cop who is closeted and gay and want to stay that way, so I thought I’d out myself to you and Zerbrowski on first meeting
Anita: of course! This makes perfect sense!
Brice: I’m also going to ask your advice on how to stop straight women hitting on me. Because being closeted for 8 years I totally have no idea at all, so I thought I’d ask some straight strangers.
Anita: this is perfect! We can spend the best part of a chapter describing our relationships to each other! Near stranger, let me tell you intimate details I have never discussed with anyone in great detail – did you know my stripper boyfriends bloat if they eat too much meat?
Zerbrowski: Why are we even having this conversation when we should be talking about cholesterol and eating salad!?
Anita: Of course, it’s not like we’ve got anything better to talk about. Like the plot.

Good news is Dolph no longer has an irrational, violent loathing for Anita. Bad news is that he’s passed the “hate Anita” baton to Larry. Because Anita’s life lacks distracting drama.

Oh and Arnet, she who hates Anita for all the hot men she has (joining Ronnie in the women-who-hate-Anita-because-she-has-all-the-hot-guys club) has threatened to kill Jean-Claude now; and is on the prowl for Brice and ensures Anita keep her evil sexy clutches off the man she’s called dibs on. We have development of Larry’s wife Tammy, she’s now a religious fanatic intent on converting people – so she’s unpleasant too. Claudia dropped in to raise your hopes that there may be one developed female character in this book other than Anita, but she just carried a gun around and blushed a couple of times. Dr. Lillian got to heal some wounds and Jade showed up to be a delicate fragile thing of delicateness. Some other woman I can’t even remember had a screaming row and expressed her awe and admiration for Anita’s boyfriend wrangling abilities.

I’m actually surprised that she made Brice gay – since this series has been very leery with actual gay and lesbian characters; but I’m wary how he’s going to be treated especially since he’s asking straight Anita for advice in dubious circumstances. Also Anita apparently considers Brice safe after Brice reveals he is gay. But then wonders if she jumped the gun and he could be lying and maybe he’s not gay. Why does him being gay make him safer and someone to trust?

In this book there’s also a strong push to make clear that the bisexual characters that are closest to Anita are zomg 99% straight honest, really (allowing you to have straight manly men AND hot mansex). Actual bisexuals are shown as desperately needing BOTH men and women and Asher, the only character we regularly see who leans more towards being gay than “straight with occasional exceptions” is, yet again, an emotional, bitter, jealous drama lover – AGAIN. In an added touch of homophobia and misogyny, a female lover calls him “more of a freaking girl than I would ever be”. Oh and Anita compares discriminating against someone having sex with werewolves and vampires to discriminating against someone due to their sexual orientation. Yes, vampriesexual is the new gay it seems. To be extra galling, Missouri doesn’t actually ban discrimination against sexual orientation anyway.

It seems this series is happy with some same-sex loving for titillation, but is determined to keep these titillators as straight as possible – and the closer we get to openly labelling someone as bi or gay, the more the stereotypes build up.

And in the end the bad guy learns the error of his ways and promises not to do it again. No, really.

There was a lot wrong with this book as you can guess – but the main thing was that chapter after chapter went by with nothing happening and no development. There was sex. Or there was a pointless scene. Or there was angst. Or there was a vague random encounter with the bad guys that basically involved Anita showing up with guys with big guns, shooting the bad guys with no trouble, tension or problem, then filling in paperwork. I have to say it – it was boring, the concept could have been interesting. We could have had a PR campaign for free vampires, legal fights, attempt to discredit Jean-Claude, covert action. Instead we had gun fights and bombs, and not much of that. And lots and lots and lots of personal life drama.