Review: Rapture by Lauren Kate, Book 4 of the Fallen Series 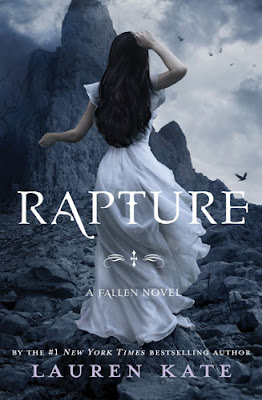 In 9 days, Lucifer’s co-opted Fall will reach Earth. And when it does, the last 6,000 years of history will be erased, time can be re-written according to his whims and his image. It is down to Daniel, Luce and their friends to find the location of the Fall and get there before Lucifer to stop the entirety of history being re-written.

Though they have new, surprising friends, they also have both old enemies and misguided fools ready to fight them to a stand still – with friends having to sacrifice themselves to ultimately make it to the end – where we finally learn the true nature of Luce’s curse and her full history.

Luce is, again, kept in the dark throughout the majority of this book. Yes, there’s a very good story reason why she can’t be told anything (and that story reason is finally explained) but even casual questions “where are we going? Why? What are we doing?”, questions which would have taken a second to answer, are routinely ignored. I mean that, literally ignored. Half the time she’s barely even given a “I’m sorry Luce, I can’t tell you.” They just pretend she hasn’t even spoken – and Luce? Accepts this. They also make a lot of plans while she’s asleep, or unconscious or otherwise unable to contribute – which just makes her more worthless and more as a poseable tool in their hands – and emphasises just how little she adds to the story (as well as keeping us – and her – in the dark).

When she does actually achieve anything (like swimming. Or remembering something) everyone flocks around her like she’s just won every gold medal in the Olympics while simultaneously winning all the Nobel Prizes at once. The fawning is so over the top I actually re-read it, wondering if it might be sarcastic – but no, apparently they are sincerely this impressed at even the most mediocre achievement on her part. They also comfort her immensely when there is any kind of grief – even when she probably has the least reason to be grieving. When immortal beings the Angels have known for centuries – millennia even, die it is Luce who they all comfort as she grieves, Luce who needs the angels to all be ready with a shoulder for her to cry on.

This book – the series in general - reads like Daniel and his friends had an adventure –and they dragged Luce around to get in their way and be annoying until the last 30% of the 4th book where she actually become relevant. And that’s pretty much how they treat her – sure everyone fawns over her and Daniel is constantly expressing his eternal love – but no-one listens to her, no-one expects her to be capable of anything or her to have a valid opinion or any kind of input. She’s a pet – a cherished, much loved, pet.

And it compounds the fact that we still have Daniel loving Luce for all the ages regardless of who she is, what her values are, what her personality is – all because of her super-special soul. Who she actually IS as a person is irrelevant.

Which especially stands out when the great big message of the book is a wonderful statement on love – one what love is and isn’t. On how love is based on mutual respect and seeing the real person – rather than controlling them and moulding them into the person you want them to be. Which is a wonderful message and it’s really well written – but then you look at her relationship with Daniel and the gears start to clash.

The eternal balance was interesting but, ultimately, didn’t work for a motivation for the sacrifices. If there is one angel; left to tip the balance, it makes no sense for the person who did sacrifice themselves – someone who tips the balance way more than any other angel – to do so. Why sacrifice someone who is an even bigger hitter on your team, in favour of someone who is undecided and a lower weight anyway?

Similarly, the Scale bemuses me – if it is supposed to be fully devoted to God, then why is it, basically, evil? Its pettiness and cruelty is ok because it adores God, while good and genuine angels are Fallen because they don’t? It casts their God as an immoral egotist.

What did both surprise and impress me was the ending. While I was beginning to guess it, Lucinda’s exact nature was still extremely well portrayed. In particular I was deeply impressed how she managed to draw upon all of what had occurred in the last books to actually give them purpose and meaning – which was a major problem because reading those books felt utterly devoid of either. All of her past lives, all of her experiences in the past book, all of those elements that were so frustrating and pointless and tempted me to skip forwards, finally made sense and had some kind of impact on the actual ending and development.

I actually re-read the ending because it shocked me – it was such an utter turn around from what I have become used to reading 4 books of this series – and showed really what a truly excellent series it could have been, if this level of action, of power and of epic had been maintained.

And then we had the ultimate “ending” and reward which was so utterly disappointing! Such a come down after this final surge of epic. I suppose it was a happily ever after, but it was such a mundane happily ever after.

The problem is that this is a severe case of too little too late. This happened in the last 30% of the last book of a 4 book series. That’s an awful lot of rambling, of irrelevancy and, sadly, dullness before this story finally got its act together and pulled out the epic, the action and the magic. Worse, because there’s been such a complete lack of meaningful world building before this, when we reach this book it’s almost crammed. Is there a reason why the Scale, the Outcasts, the Elders and so much more couldn’t have been explained before time? Or had a greater introduction? It could have lifted so much of the past 3 books.

Inclusion-wise, we have Roland, one of the fallen angels as a POC, but he plays a very minor role, one of the support angels and not even as close and important as Arianne or Cam or even Gabbe; I think even the Outcasts played a more important role in this one. That’s the extent of the diversity. I did like that God was a woman, though.

In the end, I was really happy with the ending and extremely surprised at how it picked up. But it wasn’t enough to make me like this book – too little, too late; but definitely enough to make me give the author another look.