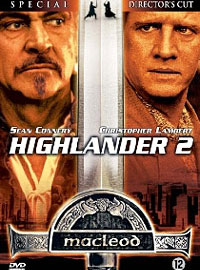 Roger Ebert of the Chicago Sun-Times gave the film a score of 0.5 star (out of four), saying: "Highlander II: The Quickening is the most hilariously incomprehensible movie I've seen in many a long day—a movie almost awesome in its badness. Wherever science fiction fans gather, in decades and generations to come, this film will be remembered in hushed tones as one of the immortal low points of the genre.

I could not possibly agree more.

I don't know what possessed them to change the entire cannon when they had built a really great world. Have they never heard the phrase, "if it ain't broke don't fix it?"  Apparently, all the immortals are now from the planet Zeist.  Could they come up with a more ridiculous name?

Earth's ozone layer has been destroyed and so Conner helped with the creation of the shield, which protected humans from the harmful UV rays. Unfortunately, it cast the word into an eternal darkness, which has left humanity desolate. He built the shield because he promised Brenda Wyatt MacLeod, his wife on her deathbed to save the survivors. The shield is run by a corporation called The Shield (wow such an original name).  David Blake the CEO, is only interested in the profits earned and does not want the word to get out that ozone layer has healed itself.

In the meantime, Connor has grown old and he expects to die a natural death.  At an opera, memories come flashing back to him and he realizes that he and Juan Sánchez Villa-Lobos Ramírez, were actually sentenced to earth for their part in a rebellion. The winner of the prize would actually be given the choice to either return to the planet Zeist or die. Katana, the leader who crushed the resistance is unhappy because he wanted Conner and Ramírez dead.

After killing two immortals, Connor is restored to youth and so he calls out for Juan Sánchez Villa-Lobos Ramírez, who if you remember died in the first movie, and he comes back to life. Ramírez uses his earing to pay for a custom made suit from the oldest tailor in Scotland and an airplane ticket to meet up with Connor. In the meantime, Connor has met Louise Marcus, who knows about The Shield and witnesses Connor's return to youth.  Of course he tells her everything about his past and she becomes his new love interest. Oh the tragic horror of  a man who cannot die, whose past is littered with dead women. Can it be anymore romantic?

Katana teams up with David Blake and they square up against Connor, Ramírez and Louise.  Ramírez sacrifices himself -- so that Connor can live -- in the most ridiculously dramatic scene, leaving Connor and Louise to find the hole in the shield, to check if the ozone layer did indeed repair itself.  Once they discover that the earth has been healed, they still have to deal with the fact that destroying the shield will require more energy than is currently available on earth, and destroy the earth.  Blake makes the mistake of challenging Katana and is thrown out a window.

At the shield, Connor and Katana have the expected big showdown and predictably Connor wins. Connor steps into the energy stream causing the shield to be destroyed and Louise sees the stars for the first time in her life.  Cue kiss and credits.

Okay, I somehow survived this hour and forty-nine minutes of pure horror. This is easily one of the worst movies I have ever watched.  Even if I could forgive the total annihilation of cannon, I cannot forgive the absolute meandering ridiculous plot and the acting which was below even a B movie standard.

In terms of social justice, everyone in this film is White, straight, cisgendered and able bodied.  I can only thank them for their erasure, as no marginalized person needed to be part of this hot mess. If you are a fan of this series and like myself had managed to skip Highlander II The Quickening, by watching it, you are risking any positive association you have with the series  Not only is this the worst movie in the series, it is quite easily one of the worst movies I have seen in the genre.