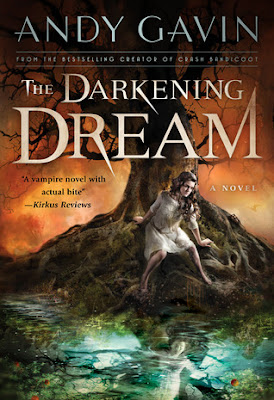 Sarah is a brilliant student in Salem, Massachusetts in 1913. She has a very promising life ahead of her with her brilliant mind, albeit she’s less than pleased with her family trying to set her up with nice Jewish boys, especially when Alex, a new and intriguing boy moves to the area.

Of more concern is Nazir – an ancient and powerful vampire that has also arrived. Working with a local Warlock for an even darker power, they seek an ancient, holy artefact. Vampires, warlocks, demons and even vengeful Egyptian gods are all gathered to seize the prize.

And Sarah is the one called upon to stop them. But she has good friends and a surprisingly powerful family history and with faith, magic and determination she refuses to step aside – whether that battle takes her into fetid vampire lairs, cobbling together half understood spells to save the lives of young children or stepping through angelic portals to fight among angels.

I love the world that is created here. While none of it is unique in itself – the elements of demons and magic and vampires together makes for a very rich combination. It also harkens back to the original core of vampires as a monster in horror stories rather than the current, romantic depictions.

Nasir isn’t just a bad guy, he is out and out evil, complete with terrifying bat form and bug-eating servants, he is Dracula as Dracula was, an insidious threat to be feared and fought rather than a romantic character to embrace.

The world also draws on a of divine imagery with heaven, hell, archangels and the power of faith which instantly sets the story up with an epic feel. It has a strong sense of being much more than a fight for a few people or just one object, but with massive forces in the balance.

And part of that is because the world is very well built. Magic doesn’t involve just saying a few words and waving your hands, there is ritual and rules. Some of them very complex and requiring an almost scientific knowledge. It’s great to see a well thought out world that has magic with systems rather than shiny hand waving. And, of course, this is built on a considerable foundation of research that is always impressive to see – I feel that the author has done a lot of reading on Judeo-Christian theology and mythology and the fullness of it is really there in the text.

As to the romance element – I didn’t dislike it but nor did I particularly like it. I think it was unnecessary – a deep friendship would have served as well - but it didn’t derail the plot. Perhaps it did help destroy the sense of time and place, but, frankly, that was already hanging on by a thread.

Thankfully the story was really well paced and switched point of views smoothly enough between Parris, Nazir, Alex and Sarah that the romance, while adding nothing, couldn’t detract from the story either. The action and tension is well maintained throughout, the downtime explained and never drags and there are no moments where I’m left wishing they characters would move faster – nor are there any moments where I felt lost or rushed, except at the end.

At the end of the book we have a twist – it’s a well foreshadowed twist that is really well done – it can be predicted but only if you’ve been paying attention as the clues were there but not overt lampshading. It adds an extra nuance to the end of the story (which works really well into the book’s cliffhanger ending) and promises more depth to follow. Yet, at the same time, we’d just had the big, epic confrontation and this felt a little tacked on the end. Perhaps it should have left off with a hint and moved this part to the next book. Having the big show down and then action afterwards feels vaguely like winning a big sports match, sitting down with a cup of tea and having someone drag you up again to go to the gym.

All of the characters felt balanced – while Ann was reluctant to get involved it was always in a human manner and never made me feel she was a dainty damsel in need of rescue, though both she and Sam were somewhat side characters; Alex was fleshed out with a more full characterisation that made him feel like a full person, even if his being Greek seemed more of an undernote than a descriptor (and allowed him to repeatedly make not-very-subtle “isn’t American great” comments)

Sarah is a great character. She is intelligent (ok, perhaps a little excessively so to an extent that shakes believability) and capable. Her decisions are wise and generally informed. She runs off on her own but rarely to a level of spunkiness we have seen in the genre. She’s a leader without being bossy or arrogant and she’s confident without deciding she knows everything. She’s not perfect, she doesn’t benefit from knowing everything (a narrator’s knowledge) and she learns from her mistakes – and she does make mistakes. And while she is developing her power, she doesn’t have super powers by any stretch – her strength as a character is not based on her ability to fight or call on the special shiny magic. I also like that even though she calls on holy power and sees definite proof of it, she’s also not willing to say “god wills it” and roll over. When she believes the choices deity seems to have made for her seem harsh, she says so – and she doesn’t lay down and become the sacrificing martyr,.

If there’s one element to her I don’t like, it’s her repeated refusal to tell her father everything; there’s no real reason to keep secrets from him or go off on her own when she knows he knows about the supernatural and the dangers and has both knowledge and power. However, even this complaint is minor when looking at the genre. Most protagonists in this genre wouldn’t tell their parents water was wet unless forced under threat of death, even being willing to confide what she does with her father makes her immensely more sensible and intelligent than we’re used to. Almost unique among urban fantasy protagonists, she actually has a close and loving relationship with her parents and, her father at least, is fully aware of the supernatural world into which she is plunged.

This book is set in 1913 in Massachusetts. Unfortunately, I kept forgetting this. While the setting keeps reminding me, everytime someone speaks I’m jarred out of it – their interactions, their behaviour feel very modern. The time period is used to justify archaic language towards Black people, though it isn’t used for the gratuitous racism that is so common in historicals.

That doesn’t mean the depiction is unproblematic. The enemy vampire, Nasir is a Muslim paedophile of Arabic descent, working with his (always described as huge) Black, Moorish slave eunuchs. And they face off against the combine Christian and Jewish force of Sarah and her friends. Thankfully, Nasir’s ally and other servant is a Christian pastor – it’s like we come close to reaching a very Unfortunate Implication but teeter on the brink of it.

Still, they remain the only depictions of POC we have are a Black cook who sends Sarah to pick up some Juju from a Black witchdoctor.  That’s the extent of the racial inclusion and there is no GBLT inclusion.

All in all, this book hit a lot of pluses for me. It had a fascinating story, a well made world, excellent pacing, compelling characters, strong relationships, well maintained theme and tension, some excellent writing and nice big doses of the epic to keep me glued. Definitely worth a read and I look forward to the sequel to see it grow and change yet further. A great story and the potential for an excellent series.