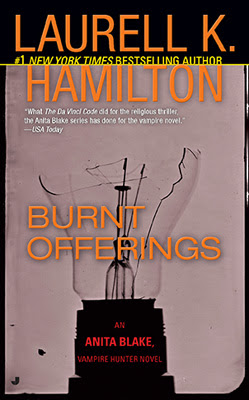 The Vampire Council, the supreme authority over all things vampire, is in town and they are not happy with Jean-Claude. It seems that Mr. Oliver was the Councillor known as the Earthmover. Traditionally the vampire that kills a Councillor takes his place on the Council.

But Jean-Claude doesn’t want the job and is doubtful of his own ability to survive at such a high level against such ancient and powerful vampires. Unfortunately, that’s not a view shared by all the Councillors, some of whom fear his rise to power and are looking for an excuse to kill him.

And that excuse is the suspicion that he’s trying to set up a new council in the US – if Jean-Claude can’t prove that false, then they have grounds for his execution. It’s even shakier when they realise that several of the Council representatives have no reason to like Jean-Claude, including Asher, his long ago friend who still blames him for the death of Julianna and the horrific scars he received at the hands of the church.

The Councillors themselves have some awful habits that strain Anita’s tolerance, and her ability to keep all of her people safe from their abuses. And all along, some of them have a different agenda entirely.

I loved to learn about the Council, it was nice to see some of the world outside of St. Louis, some of the history and authority of vampires and what they mean. It was also a first real introduction to the heads of some of the vampire lines, even though we’ve been introduced to the different lines in the past.

I also like very much the continuation of the issues that happened in the past. Like she can’t kill the head of a major shapeshifter group and not have that alter the balance of the city and not have consequences. As well as the ongoing tension with Richard and Dolph – as the death count Anita has racked up just becomes too much to ignore. These foundations of conflict and sustained meta are interesting and add a lot of depth to the world.

I do think the Councillors came off as a little anti-climactic – especially Padma. There was a lot of talking them up but all we really got was dramatic descriptions of their “big burning power” they didn’t actually do a whole lot with (and Jean-Claude kept driving back as well). And Anita being able to take down Padma by basically clinging to him like a monkey and throwing her Munin power (she used werewolf magic to take down the Master of Beasts!) just really shot him down. Traveller I could see as a Councillor – but Padma didn’t sell it to me. I think there was a sore need to ramp up the power level of these supposed mighty forces of the vampire world. Maybe if they’d made a bigger thing about Padma being able to kill with his power alone

While I think the Inferno storyline added something – in that it continued the meta-plot of Humans First and ongoing legal and political battles, as well as stressing the effect the Council has on lesser vampires, it was also engaged in far too much detail. We didn’t need Anita to go down into the Church of Eternal life and go wandering around church basement, we didn’t need Vicky Pierce’s story at all. The day could have happened without splitting so much of Anita’s attention from the already overwhelmingly dominant plot. It actually jarred me out of the tension of the main plot line, it was too long and too involved.

Richard and Anita’s relationship, at the moment, doesn’t annoy me. Is it bitter and emotional and full of lots of sniping and attacking – yes, but we’re just after the break up so it’s not that jarring and, at the same time, Richard managed to at least vaguely hold it together when the tension was high. When the enemies are absent, then Richard lashes out

Anita is increasingly losing female company and the women around her are increasingly problematic. Those who approach her as remote equals are often set down or have to clash with Anita. Ronnie is expressly portrayed as less tough than Anita as she goes to bits over killing someone while the oh-so-tough Anita takes it in stride; with a direct invitation from Anita to check out of Anita’s oh-so-dangerous life. She clashes with Tammy, the new witch detective. She engages in a massive challenge to Silvie’s authority in the pack – swooping in and taking over; and later she rescues Silvie who has suffered torture and rape. Silvie has every reason to be traumatised, but in the rescue and trauma she drops all challenge to Richard (and Anita’s) position – she has been set down, beneath Anita. Elizabeth, the should-be-alpha of the wereleopards? Controlled by the vampires and, again, made to recognise Anita’s authority in the end.

That leaves a huge amount of women victims, women who are far more frightened than Anita, who just aren’t as strong as Anita, women who are “delicate” and “fragile” who Anita is “protective” of – Vivian and Cherry; even some random human servant of the Church of Eternal life collapses into delicate tears and cries on Anita’s shoulder. As does Lorraine, the powerful werewolf who behaves like a rabbit and clings sobbing to Anita. We even throw in Vicki Pierce, the beautiful, manipulative woman using her tears and beauty to try and manipulate the big strong men – but Anita is there to defeat her.

And while we’re on the subject of evil people labelled with sexual depravity: Yvette is a necrophiliac who likes to torture Jason, Warwick and just about anyone else, Asher wants to take blood from Anita in a way that is “rape” (Jean-Claude advises her to turn it into a seduction – no matter how nice she is to a rapist, it doesn’t change the unwillingness), The Traveller and Balthasar rape men Traveller is possessing (Anita suggests he possess a gay man instead who won’t “mind it so much”. Because being raped is totally OK if you’re attracted to the gender of your rapist? Or does that only apply to gay men?), Padma rapes  Vivian, Fernando rapes any woman he can get his hands on and Liv helps rape Silvie (specifically they got a woman to join in the rape because Silvie is a lesbian).

So, moving on to sexuality we have Silvie – the lesbian who is raped not only by a man but singled out for rape by a woman as well. And the Traveller and Balthasar – gay rapists. This is not all good.

POC wise we had Anita and some background POC – but Padma and his maharajah clothes unfortunately stand out most strongly.

I think this book missed out the issues and depth I’ve seen in previous books and was more just power vs power without any real depth behind it. And the power itself was more grandstanding. I still liked the story – and the developing world of the vampire council and the powers they represent, but I don’t think it managed to maintain the mighty power of them or the desperation that should have come from facing them; it didn’t help that the Council was almost cartoonish in its villainy. I enjoyed the book, but that lack of tension pulled it flat for me.