Review: Son of a Witch by Gregory Maguire 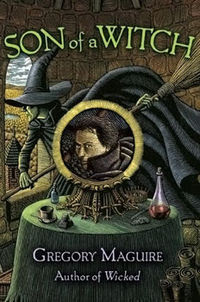 Liir leads an interesting life after the death of Elphaba. Still unsure as to whether she was his mother or not, he is left somewhat rudderless, following Dorothy back to the Emerald City as much because he has little else to do more than anything. Along the way it’s clear that Oz politics is far more complex than it seems – and certainly not everyone is so happy that the “Wicked Witch of the West” is dead.

In the Emerald City – in fact, in Oz in general, Liir is quickly out of his depth. As the rulership changes from the Wizard to Lady Glinda, to the Scarecrow, to the Holy Emperor, politics quickly drags the country along. Liir is torn with commitments he has no idea how to fulfil – from finding Noor, to helping the Elephant Nastoya to even helping the Council of Birds – and trying to make his own life. Drifting from the City to the military, his world is shaken repeatedly with massive moral quandaries and dire consequences of his actions

There is so much of this book I like – it has some pretty epic scenes with the dragons and the council of birds, yet all without Liir becoming super-powered or even seeking them out, he’s almost driven to it. We can see the seeds of rebellion as he sees to the full evil of what he’s facing and why rebellion is necessary.

I love his relationship with Trism – albeit it seems awfully quickly entered into, awfully brief and awfully abruptly ended (I desperately wanted to see more because it had the hallmarks of an extremely good relationship). I loved them on the run together – and would have loved that part of the story to have been much longer so we could see the affection grow between them as they both confronted the consequences of their actions.

I liked his relationship with Candle and the life they were building – and how that contrasted with the duties that were placed on him. I liked her power of music and what strength it had – something else I’d like to have heard more on. I wanted to see more of their life together, of them building a home, of them developing an affection.

I liked the moral conflicts that were raised of cause and effect. I think the Birds’ quandary was a little contrived (“it’s not for me to decide who gets their face scraped or not” um, no, that’s not a moral quandary. No-one should get their face scraped off slowly by dragon claws and if you can stop it you should. This isn’t a moral quandary and it isn’t playing god), but in general there was a lot of genuine conflict here.

I loved and liked a whole lot of this book, really. The problem? The problem is everything I described there happened in the last 25% of the book. The remaining 75% has none of that. It has lots and lots of Liir kind of wandering randomly from place to place, it does a lot to establish who characters are who may kinda, sorta, become relevant for the actual 25% but it doesn’t do much more.

I mean, we do learn a lot about Liir and his life, so we don’t leap from 14 year old Liir to 24 year old Liir in one book – but we’re told all this about Liir before we have any reason to be interested in him. At the end of the last book all we know about Liir is that he may or may not be Elphaba’s son, and he’s a kid who hangs around the castle. He isn’t very interesting, the flying monkey has more potential to enthral me. But then we follow him around, watch him acquire goals, watch his coming of age, learn as he bounces from place to place, is faced by major moral dilemmas. He makes mistakes, but he learns from them, he grows as a person, he suffers set-backs but gets up and tries to find his new place in the world, he repeatedly loses everything, including his goals and tries to move on and start elsewhere…

But why do I care? It’s like reading the autobiography of a famous person’s not very talented child. I’m sure they’ve had a very rich and full life but I have been given no reason to care about this life. This is a problem I find in books, and maybe it’s a matter of taste, but I’m not going to get enthralled in a world or a character if I haven’t been given a story reason to invest in them. And for the majority of this book I had no reason to invest in Liir. People gave him tasks or he assumed tasks – finding Noor, learning magic, restoring Princess Nastoya, but he largely left them fallow and instead drifted – to the Emerald City, to the prison, to the military, back to Kamia Ko. But there’s no story behind any of this, he seems to be acting on a whim as much as anything- which, fair enough, people do, but I need a reason to care about Liir’s whims. I don’t need a book to be like the annoying person on a plane who tells you their life story (and why do I always get sat next to them?)

Perhaps if we’d been introduced to some of the later elements of the book earlier and then had (briefer) flashbacks I’d have enjoyed it more, I’d be more invested in the story – and the book could have focused more on the elements that felt rushed than on this long preamble.

There were some elements that remain problematic. I dislike how the POC remain the “savages” of these books (even if said Savages have a society that seems more palatable than the cruelty of the Emerald City) and some of the moral lessons were a trifle forced. I also am really unhappy with the idea of Candle having sex with Liir and conceiving a child with him while Liir was comatose – that is rape and casts their whole relationship in an unpleasant light (especially since we don’t know how much love Liir has for Candle and how much is Nightengale effect).

The book is very good at analysing class and how fragile society’s dispossessed truly are even while the rich and even the charitable float around with the appearance of helping even while not changing much. The assessment of Dorothy’s “good deeds” were cutting and excellent, as well as Lady Glinda’s charitable ineffectualness (giving money to support the poor, yet still running the brutal prison). There was also wonderful poking of straw man – literally – government.

And I did like Trism and Liir’s relationship, even if it were abrupt – but it wasn’t long enough to either fail or succeed or be problematic or encouraging. However, we see so little of Liir and Trism's relationship compared to his still brief relationship with Candle. His relationship with Trism seemed to rest far more on implication and assumption rather than overt labelling we had with Candle

All in all, there were elements of the book I liked – but they were rare, late and not covered in enough detail – while the elements I didn’t care for were dragged out in unnecessary detail and information.