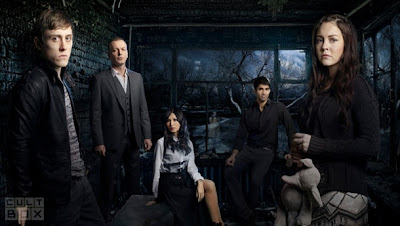 We have a man breaking and entering a long disused chapel -  he seems less than pleased and lobs a cross across the room, lights a ciggie and then realises… he’s being watched. Cue Bedlam spookiness – even in broad daylight. The ratchet it up a notch by having the cross he threw reappear on the altar. The man isn’t frightened though – he shouts a challenge instead.

Now to Bedlam, Max and Ellie are doing the friendy thing and finally Ellie tells Max that she had an abortion last week, she chose to go alone. Max is supportive, she’s apologetic for not telling him, but he’s very clear it’s her choice and she’s very clear she did the right thing with the position she is in life.

And 2 more people are breaking into the same chapel, meeting up with their friend – and Ellie gets a vision of a vicar running from something and grabbing the cross – the one that tidies itself up after being disturbed. Quick summons to Max, a check to see a church local to bedlam (where inmates may have gone) and it’s time for a little trip.

This involves awkward scenes as they visit local churches and pose as an engaged couple, which is awkward but not quite so much as Ellie’s way out (which I had to admire). At least Max learns that the Bedlam inmates never went to the church – they went to their own chapel (which makes more sense and they really should have thought of it).

Max and Ellie do more jokey flirting – Max amused at the idea of Ellie as a bride, saying he’d always stand by her unlike her fiancé (who she defends), but Ellie assures him he can have a big fancy wedding so long as she gets to be bridesmaid. Ouch, Max, not-so-subtle hint there

In the spooky chapel, 1 of them (Liam) wants to film evil/ghosts/demons/lack of common sense whatever and put it on the internet. He’s poking the ghosts, it seems, because of his religious father and something apparently unpleasant that happened. Liam’s dislike of the church seems to be provoking the ghost, though.

Keira is settling into the flat with the other 3, buying food and cooking (a novelty in their flat) where she and Dan discuss poor Max stuck in Ellie’s “friend zone” and their own hook up last episode. Keria quickly lays down the law of what she needs and what she wants – a friend she can rely on while her life is in the shit – no mind games.

The prospective dinner is made a 1,000 times more awkward by Warren arriving to talk to Dan, now Dan has been revealed as his son, and Dan inviting him for Sunday Lunch. Between Keria and Warren’s broken relationship, Dan and Warren’s family issues and Keira’s rift with her family it is perhaps the most awkward meal of all time ever. She quickly drafts Max and Ellie into the fun so she doesn’t have to kill someone – more awkwardness! The end of which Dan and Warren have a quite conversation about Dan wanting to keep Warren as his father secret for the time being, with the bonus of Max overhearing him.

While Ellie and Max are seeking out the chapel, Max is called away to the bar, while Ellie gets more visions of the vicar spying on the evil bald bloke and a baby.

In the chapel we get more spookiness, with Liam preparing for a ritual at night time, and the font both reflecting things that aren’t there and doing what all water in Bedlam does – trying to drown people. Liam sets up his camera and starts drawing on the floor while declaiming the evil and/or non-existence of god while his companions become more and more freaked out. Liam begins to recite the Lord’s Prayer in negative, bullying his companions, Taylor and Michelle, into joining him as the ghost becomes more and more irritated – and nearly drops a very heavy crucifix on them, which pleases Liam because he has his proof (of… what? Ghosts? Lack of deity? Touchiness of god? What?) Before they leave, Taylor goes to one side to use the toilet and is attacked by a Bedlam ghost – a Vicar with his mouth sewn shut.

Max sees a video of the deadly falling crucifix on his website Bedlam Watch, knowing they’re in the building and Ellie checks some floor plans and gets a vision off them – a vicar backing away in fear, chanting the Lord’s Prayer until his attacker sews his lips shut. To the chapel! Where they find only the remains of the “black mass” and Ellie has another vision suggesting the chaplain saw something at Bedlam he shouldn’t have (uh-huh lampshade those clues, Eliie!)

Michelle and Liam are wandering through the building looking for Taylor – and the spooky chaplain appears; causing Liam to yell at it about religion and his abusive father who was a vicar – Michelle urges him that his father apologised before he died, but Liam’s having none of it – and nor is spooky chaplain with his mouth sewn shut – Michelle, sensibly, drags Liam away, screaming.

At last everyone meets up – Ellie, Max, Liam and Michell – when they find Taylor locked in a cupboard – with his lips sewn shut. Which is just beyond nasty. Almost as nasty as Liam being thrown across the room and crucified for saying there is no god. He tries to profess belief in god to placate the ghost but it’s not enough; he has to forgive his abusive father. When he does he is released and can leave.

And Ellie has another vision – Joseph (evil bald guy from Bedlam’s past) took a baby – who Ellie belies is Eve and that’s why Eve is afraid. The chaplain reappears to nod at them and then disappear

Max goes to meet “Silver Bullet” (feeding him Bedlam info) in the bar and runs into Dan – and a massive fight soon follows. Max tries to defend the site and resorts to raising what he overheard about Dan being Warren’s son – Max doesn’t believe it’s true because they’re of a different race, and Dan slaps down the sheer ridiculousness of that and points out that mixed race people do actually exist. They segue from the angry fight into talking about Dan, his past, his family and why he wanted to find Warren

Dan and Keira also have a friend moment, exploring what Keira’s going to do next – including officially breaking up with Warren. Which doesn’t go to plan as Keira and Warren end up in bed together. Afterwards, Keira comments on Warren’s B-mark, that Ellie has the same one and Warren loses it, grabbing her, hurting her and demanding to know who told her to say that. She’s confused and he storms off, demanding everyone leave him alone.

he ends up examining old stills of the staff of Bedlam, including the bald man with the Bedlam symbol on his head – and he passes out into a spooky nightmare and begins sleepwalking while Dan follows and tries to attract his attention, but gets shut behind an old wooden door, unable to follow, but he can watch through a crack in the planks. Warren wakes, confused – and sees the hanging body of Kate.

We end with Ellie visions – and these are a doozey; Ellie sees Eve being kidnapped, being tortured – and her being branded with the Bedlam symbol, the symbol that’s on her. Eve is Ellie dumdumdum! (which does leave questions about them being spirits of the dead, but just enjoy the cliffhanger)

This episode fell a little flat with me because there wasn’t a lot that made sense. I think Liam ranting out his past and motivation at the ghost was a clumsy info-dump. I think his motivations are confusing anyway – he’s angry at the church, so he goes to an abandoned chapel to hold a supposedly-black mass? Is this to spite the church or god? And if so, how? He wants to prove the existence of ghosts and evil while saying god doesn’t exist – proving the existence of the supernatural  is hardly a rallying cry for atheism. He wants to show god is evil – but he does it in a building renowned for being haunted so any supernatural events will be blamed on the ghosts? I just… didn’t find it plausible.

And the murder of the chaplain. Season 1 and, so far, season 2 shows that the Bedlam doctors abused their inmates because they were experimenting on them and/or they had extremely wrong ideas about curing/controlling them. So, yes, murder the chaplain to silence him, but sew his lips shut? Why, why would they do that? What experimental value does that have? What control does that assert?

I also am not happy with the ending. Placating the ghost torturing you by professing a religious belief you don’t have is bad enough – but to be forced to forgive your abuser? No no no and again no to this narrative that an abuser is owed forgiveness, that the abuse victim is somehow wrong for not forgiving their abuser or that forgiving an abuser is somehow the noble or good thing to do – and how it’s always supposed to be “good” for the victim. This is a really dominant narrative, that forgiveness is cleansing and good with it becoming and almost duty to forgive – regardless of whether the victim wants to, is ready to or whether the victimiser has earned it

We did have something more surprising – Ellie had an abortion. And she didn’t fall into guilt or grief about it, she didn’t discuss it with any man, she didn’t need help, though support was offered and she wasn’t shamed or judged. It’s not as revolutionary on British television as it may be elsewhere, but it’s not that common.