Review: The Fall by Guillermo Del Toro and Chuck Hogan 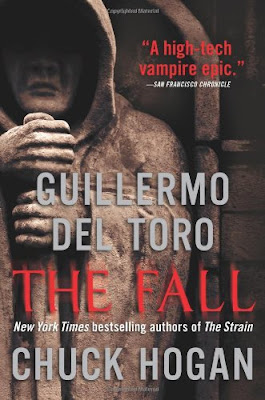 The Master’s vampires are furthering their control over New York City – and not just New York, similar planes are landing throughout the world. On every continent, cities are falling and the vampires are spreading. And that’s before the Master’s plan with the nuclear power plants comes to fruition.

In New York, Fess, Strakarian and Ephraim are reeling from the failure of their attack plan. The Master isn’t dead, sunlight and silver didn’t kill him, he is only injured but still able to move his plan forward – with the help of his mortal agents and former Nazi vampires. The number of vampires in the city is growing, fire and smoke are blocking the sun during the day, robbing them of their main weapon and the vampires are using tunnels and the subway to get round the running water, resisting all attempts to be contained.

The mortal authorities, compromised by the Master and reeling in panic, are slow and ineffective to address the threat in any realistic manner.

Even the other Ancients, the other Vampire Masters of the world, seem helpless before the rogue. The only hope they have is a book that is supposed to contain the secrets of vampirism, their origins and, perhaps, a way to stop the plague.

This world is really coming together in this book – the Ancients, how vampires normally work without destroying the world, what vampires are – it’s all being built upon here. If The Strain introduced the world, then The Fall is filling in the details and giving it flesh and form.

And the same applies to the plot – we’re getting the details of the Master’s plan, and the both the scale and power of it, the full scope of human collusion and we’ve even got a semi-long term goal for the survivors. Dystopians can often devolve into a series of events while the main characters try to live – and while survival horror has its charms, it’s nice to have some kind of goal beyond “live to see tomorrow”. But with the book and the codes within it, there’s hope for a lot more. The plot has also tightened on the characters, largely because a lot of them have died, and now they all have a place in the book and the story that is established. There are less hangers on.

The theme is also very strong. The growing sense of despair and loss, the world slowly losing the battle and already the sense that things have been damaged beyond repair. In the closing pages the world is in ruins, the whole world collapsing. On a personal level, the characters are repeatedly presented with loss after loss and precious few victories to balance it. Every time you feel they’ve gained ground, they lose it. They don’t seem to have gained anything on the Master – they’re making things difficult for him, but they’re not defeating him.

In terms of theme and setting – and growing bleakness it is one of the best books I’ve read –maintaining  that sense of loss and desperation while still keeping things interesting and without succumbing to too much angst (introspection, yes, but we’re spared the often repetitive angst I’ve seen elsewhere)

This had the same problems of the last book but on a smaller scale. It was long winded. I nearly DNFed this book in the first few pages. A large part of the beginning of the book is dedicated to recapping what happened in the first book – far far far too much. It’s a trilogy, there’s absolutely no need for this level of detailed recapping. I can’t imagine anyone would pick up this book without reading the Strain first.

And we still have excess characters, not as many, but still one or two that didn’t overly add anything to the plot. I would probably have overlooked them in another book – but add on to the recapping and, above all, the incredibly long descriptions and internal monologues. The same things are described repeatedly, the same thought processes (especially the ones about the subversion of love with the Dear Ones) is repeatedly revisited and hashed out at length. The problem with this is it makes the other, more tolerable, deviations from the plot (like the flashbacks, the extra characters etc) feel more annoying – they’re fine in their own right and even add texture, story and theme to the book, but they add to the excess and it just feels more and more padded. It could have lost 50 pages, maybe even 100 pages and have been a much tighter book.

What I liked as well was a complete subversion of the appropriation of past atrocities. So often these have been invoked to say “vampires did it.” This series not only doesn’t say that – but says that the vampires are inspired by the sheer extent of human evil that this is what is behind the current apocalypse. The Master would never have come up with his plan if he hadn’t seen humans do it first.

We have a lot more POC inclusion in this book, though the majority of them are still criminals, but they’re also capable and some of the main warriors in this book and the most effective force against the vampires. Those that aren’t criminal are poor and desperate, but on the most pert they’re painted sympathetically, but stereotypically.

I’m glad we saw more of Nora and even had her challenge Ephraim’s attempts to get her out of the way with “woman’s work”. Except, she tells him off but still ends up looking after the elderly and the child. She’s also the only woman who isn’t a vampire except her elderly mother who doesn’t even know what’s happening due to Alzheimers. This is the only woman on the “good guys side” which contains a whooole lot of men. The only other women we meet are fridge victims that exist to cause the main cast of men angst: we have Kelly, Ephraim’s ex-wife and Zach’s mother who exists to make them both sad. We have mention of Abraham Strakarian’s wife of long ago who is brought up, again, to make him feel sad.

Which also applies to the disabled characters – Nora’s mother is a characterless burden, Strakarian’s wife is another character we learn nothing about except how Strakarian had to care for her and, ultimately, how she died and made him sad. We do have the Angel with his stiff knee and Strakarian with his gnarled fingers and severe heart condition – but in both cases when it comes to fighting vampires these seem to just disappear.

There is a complete and utter erasure of GBLT people in this book. And the one, named fat person is remarked upon with contempt repeatedly for being fat.

Storywise this book was great, more than great. And it has and world I like and a strong theme of derspair and loss – as the world gets darker, gets bleaker and the cause to fight them seems more and more hopeless. But this book was decent. If someone had shaved 100 pages of unnecessary long windedness off it, it’d have been a whole lot better.