Review: Once Burned by Jeaniene Frost, Book 1 of the Night Prince Series 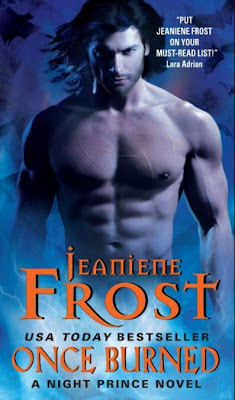 In the same world asthe Night Huntress series we’ve moved the focus away from Bones and Cat to Vlad. Vlad Dracul, or, as he hates to be called, Dracula. He lives with the myth that has grown around his name, based on a core of truth but heavily embellished by his enemies, he ultimately has one aim as a vampire – to keep his people safe, no matter who he has to hurt and what he has to do (including impaling) to make that happen.

And someone is trying to kill him and to do that they’re using our protagonist, Leila. Since being struck by lightning, Leila has the ability to see people’s history (reading their past and their sins on their skin) connect to their present and even see their future. Used properly she can see where someone is, where they’re going to be – and when they’ll be alone and vulnerable. Abilities that are certainly a threat to Vlad, but also an asset to him in finding who wishes to kidnap Leila and kill him.

It’s a solid truce, but Leila is confronted with the brutal reality of Vlad’s ruthlessness, she’s willing to work with him, but what would he have done to her, to her family, if she had not been? And how does he treat those who cross him and can she live with that? Especially with her growing attraction to him, compounded by the fact he is immune to the lethal electric shocks her body produces, making him one of the few men she can touch. Unfortunately, he’s also one of the most arrogant men she has ever met – and has a nasty habit of reading her mind and intruding on even her most private thoughts.

This is the same world as the Night Huntress series, which I always loved, following Bones and Cats adventures as we saw an ever growing larger and more impressive world. Even when focusing on just the vampires, (though there are far more than just vampires there) the politics and the intricacies of that world were always great fun to read.

We don’t see a lot of this world in this book, since it is very much stand alone and reading the other series isn’t required, but we do get hints of it coming through, connections and guest appearances that mean if you have read the other series, you can feel the continuation and the stretching of the canon which I really enjoyed. We do follow Vlad, who was an intriguing character from the previous series, but, I have to say, not one I enjoyed very much then or now.

The story itself isn’t original – she has a special power that makes her valuable and the people after her need to be stopped and she kept safe. But it had enough twists to keep it interesting; Vlad’s uneasy relationship with his past, his history and the myths that have built up around his name was a nice twist. Her relationship with her family, her dealing with his ruthless and extreme nature, the way her powers interacted in the mix especially when met with mind reading as well – the core story wasn’t original but the embellishments were. And sometimes I don’t think a story has to be original to be told well so long as the world and the characters can carry it.

The pacing was good, I was never tempted to put the book down, the descriptions were appropriate, even the musings and the internal monologues were appropriate and in context; even the sex scenes fit both the pace and theme of the book. It was nicely put together.

I like Leila as a character. She has an interesting power that makes her valuable and sought after – as well as giving her the ability to defend herself when needed, but it doesn’t make her super-woman and has limits that prevent any kind of “awesome chosen one” level. She can channel electricity (shocking people she touches, even accidentally) and she can read people’s “sins” in their skin – seeing their worst actions and reliving them. She has endured a great deal (and has a tragic childhood and a dead mother, of course) and through that has become jaded and cynical – but not in a bitter, withdrawn manner. She doesn’t trust easily, she doesn’t expect much and, in many ways, she is inured to pain and suffering in many cases because the power of her touch means she has already lived through the worst deaths imaginable. I like how that is done to not take away the horror of torment and torture, while at the same time making the commonness of it something that Leila can endure and move past. If I have a problem with her power, it’s that she didn’t develop it, Vlad had to show her how to use it and it has some dependence on vampire blood – it feels like it couldn’t just be her power, Vlad had to be behind it somehow.

She is kidnapped and suffers terribly for it – but she also rescues herself and ruthlessly deals with her tormentors in an extremely satisfying manner. She has a tragic past and it does mark her with guilt and worry, but she doesn’t spend a lot of time angsting over it, we don’t have long internal monologues nor do we have wailing. Unfortunately, she does have guilt – which is rather misdirected. She reconciles with her family, it’s touching but it’s also a little contrived, like too many major issues are forgiven and covered too quickly and too easily.

Unfortunately, while I do like a lot of things about these characters, they have elements that bother me – and it’s these elements that largely throw a spoke in the wheel of an otherwise great book. Pretty much everything else in the books I like, I’ve always liked the world, I like the majority of the characterisation, the story is pretty good – but the characters have elements to them that I don’t like which, in turn, brings the book down.

Vlad is something of a Magnificent Bastard. Or at least I think he’s supposed to be written that way. Unfortunately, I think it’s only half right. Vlad is arrogant. And yes, I can get behind the swagger of a man who truly knows how hot and amazing he is – but Vlad takes it to ridiculous levels – he’s not just “oh yeah I know you want me”, no he’s “we will be having sex, your protests are silly, you silly thing you.” No he doesn’t force her or even push her, but his constant arrogant assumption of “yeah, you want me” was so extreme that I kept hearing LMFAO playing every time he appeared – which kind of ruined the mood (and yes, I am aware you’re not all picturing Vlad singing “I’m sexy and I know it” and if I have to suffer it, so do you).

But this would have been tolerable if it weren’t for Vlad’s telepathy. Vlad can read minds, just like, in the Night Huntress series, Bones, Mencheres and Cat. And from that series we know that it’s difficult not to read minds – but Vlad never says that. As far as we’re aware, Vlad is wilfully plundering Leila’s mind.

But even if he were unable to stop, he’s still damn rude with it. He comments on her thoughts as if she said them aloud, every embarrassing thought, sexual attraction, grudging admission – he acts like she’s speaking to him. She has to try and control her thoughts not just to keep secrets from him, but to stop him being utterly rude and intrusive. He doesn’t even try to lessen the violation of mind reading, he emphasises and revels in the intrusion.

I actually don’t mind Vlad’s ruthlessness. Does he torture and kill people? Yes. He’s a vampire trying to keep his people safe which, as we saw in the Night Huntress series, means going all out to protect them or they die or are used and abused. There’s a reason why, as said in the book, albeit not as overtly, the worst fate for a vampire is to be cut off from their master and have no-one to protect them. It fit the context and the world they were in and didn’t make him irredeemably evil as would be the case in most other contexts. Similarly with Vlad being willing to use Leila’s family against her for the protection of his people – not to coerce her into bed or anything similar, but during the vampire war. It’s not palatable, but it’s no less palatable than vampire culture in general and serves to establish just how cruel and brutal it is, and how helpless a vampire is without a powerful master to champion them. It felt a natural part of the world building rather than gratuitous cruelty.

As is very common in paranormal romance, I think the affection between Vlad and Leila developed awfully quickly. It’s possible the passage of time wasn’t well conveyed, but it felt like they went from “I will never have sex with you” to “ok we’re going to have sex, but this is lust, do not expect me to fall in love, I do not love” to “I loooove you and whyyyyyy don’t you looooooove me!” in the space of a week. Which was jarring to say the least

And another element I wasn’t keen on – Leila’s virginity (yes, it’s another paranormal romance heroine who has never ever had sex against a hero who has shagged muchly) is put on a pedestal, it’s a gift she gives to Vlad and he cherishes it, she’s glad she didn’t give it to anyone else because they may not have valued it – etc. There’s a lot of massive value placed on the intact hymen which always carries an undercurrent of slut-shaming – especially since Leila internally chastises herself as a “slut” on more than one occasion. Even her mental chastisement of Vlad for not sharing his personal apartments with other lovers – a demand that all sex meet her demands of intimacy.

And finally, my last complaint on characterisation – Leila is present for the big dramatic scene because she decides to go there. Why? I have no idea. She just does. It was a clumsy insert, a decisions based on very little in the way of logic and seemed to just be “she has to be there.”

Inclusion-wise we have Shrapnel, one of Vlad’s vampires is a Black man and Mancheres makes a guest appearance. And that’s it. Which is pretty poor for a decently large cast. I hope to see more in later series, as I also hope to see more female connections as well, beyond her antagonistic relationship with her sister.

All in all, it’s a good book – I won’t say excellent and some of the appreciation is based on the Night Huntress series and seeing the potential of this series through that lens and experience. I think, after this introduction, we have a good chance of seeing some wonderful stories from this series.