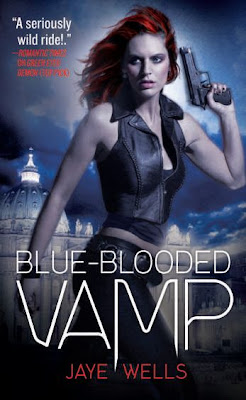 Blue Blooded Vamp is the last installment of the Sabina Kane series. I have to say that it was absolutely epic and I didn't want the story to end.  It is always wonderful to find a great series and heartbreaking to see it come to an end.
Sabina is out to kill the one man who cannot be killed - Cain.  Unfortunately for Sabina, she is also being hunted by Cain because he wants to use her to gain access to Lilith.  The God Asmodeus also has chosen this time to demand that Sabina repay a blood debt, thus throwing a wrench into her hunting plans.  Sabina must travel to Rome to find the mage Abel in the hope that the mage who once trapped Cain, will know how to neutralize him again.
As a rule, Sabina always doubted that she was the chosen one and when she does decide to take on this label, it is only to further the fight against Cain.  With everything she has done, she finds it hard to believe that she above all people is capable of bringing peace to he supernatural species.  With Giguhl and Adam by her side, the clock is quickly counting down to the moment where not believing in her destiny, could mean the death of all she loves.
Okay, from the start of this book, there was never any doubt that Sabina was indeed the chosen one, and so it was only a mater of how Wells would tie up the loose threads.  What made this compelling is how they all came together moving swiftly from revelation to revelation. I particularly loved that Wells took great care in making it clear that what Cane was doing was unacceptable and that Lilith was well within her rights to leave a man who stalked her and demanded that she love him.  This kind of behaviour is too often cast as romantic in urban fantasy.
I think that Wells is an excellent writer and the Sabina Kane series is particularly imaginative; however, once again it is filled with social justice fails.
In the last few books, Brooks / Pussy Willow was a huge problem.  In Blue Blooded Vamp, Brooks has cast aside the identity of Pussy Willow and now completely identifies as male. Brooks explains the transition back in the following:

"Zen helped me realize that I was hiding my pain behind all the makeup and the fabulous accessories  She encouraged me to let my Brooks flag fly." He executed a Z - shaped snap through the air.  (page 25)

Brooks is still very much a caricature. There are certainly gay men who are camp, the problem is that when gay men are represented in the media, this is overwhelmingly how they are portrayed. I can understand wanting to hide behind one's pain but there was still the appropriation of a trans identity. This really plays on the myth of the deceptive trans woman and if Pussy Willow is indeed a character he put on, then why did we not see a more significant change when he returned to being Brooks? Wells rushed through this entire transition and didn't develop this to the point where it could be read as unproblematic. It further didn't help that the characters surrounding him spoke of wanting to do violence to him in his alternate identity, which parallels too closely to how people who transgress the gender binary are treated. Now that he is Brooks again, suddenly everyone is accepting and loving towards him - he has appropriately conformed.

We also had the return of Goldie Schwartz:


Goldie Schwartz in addition to being Erron's stylist, was also a sassy midget with a predilection for kinky sex.  (page 15)

Schwartz is a minor character at best, yet every time she is mentioned, there is always a reference  to sexuality.  Wells also always refers to her disability as slur, which serves to further dehumanize her.  Nothing would have changed about her character or her importance to the story but yet, Wells does this every time Schwartz has appeared in this series.  It is absolutely disableist and unnecessary.

In Blue Blooded Vamp, we get the return of token inclusion with Zen. This series has been situated in several metropolitan areas and yet the only time we get a character is when it is set in New Orleans.  To make matters worse, Zen of course does Voodoo.  She certainly couldn't be a full blooded mage.  She only appears long enough in this story to provide Sabina with protection magic, making her a servant to the White protagonist.  With only Zen for representation for an entire series, Wells might as well have erased all POC from the book.

Blue Blooded Vamp also represented the maturation of Sabina Kane.  She started off  being filled with Spunky Agency with a heavy sprinkling of Kellie Independence.  Over time, Sabina learned to trust those around her and really matured to a likeable protagonist.  We watched as her conscience developed and she learned to be honest with herself and respect her true identity.

I am going to miss this series and in particular reading about Giguhl's antics.  There were times when I felt that he should have been more mature, considering that he is a demon that is thousands of years old but as a character, he could always be counted upon to deliver the funniest lines.  I even loved the twist of Giguhl's pregnancy versus his partner becoming pregnant.

Of all the books in this series Blue Blooded Vamp contained the least fails thus far and really highlighted how good this series is - the last two books in particular.  I look forward to reading any other series that Wells chooses to pen and hope that next time, she won't feel the need to lean on offensive othering.  She has the chops as far as I am concerned, to be one of the best in the genre.