Review: the Dead of Winter by Lee Collins 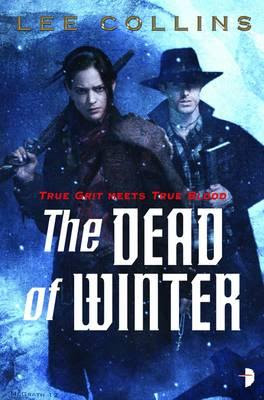 This book is a paranormal western. Cora and her husband Ben are monster hunters. They travel the frontier of the Old West hunting down monsters that plague the more isolated settlements – from hellhounds to vampires, they’re quick to respond with a silver bullet to put it down.

Which seems simple enough when they move into town. There’s an ornery marshal, but Cora’s dealt with those before even if they do strike more sparks than usual. And there’s a beastie that’s eating people, time to tackle it the old fashioned way, head on with a bullet to the brain.

Unfortunately, that doesn’t work and it takes a bit more digging to take down this rather more unusual monster with the attached worry that one day, maybe, they will tackle a monster they don’t truly know how to fight.

And this creature is just the beginning of their problems, because there’s something far older and far more dangerous lurking in the mines around the town. And far craftier than anything they’ve faced before – or anything that Cora thinks she’s faced. As they test their mettle and knowledge against the ancient, Cora must also confront memories of her past that she has sealed for 10 years.

I really liked the plot of this story, especially how the book was almost written in two halves. On the first we got to see Cora’s standard way of living and working. Her coming into town, tracking down the monsters and putting a bullet through their brain. And if that didn’t work, her back up plans, her sources of information, the resources she can call upon. By dedicating the first half of the book to a relatively mundane moment in Cora’s hunting career (albeit with a twist of it being an unusual monster) we get to see so much more of her character and background than any amount of exposition could show. Rather than launching into the Nosferatu storyline and then trying to fill in the past, this initial battle established everything we needed to know about Cora, the way she works and the way she interacts with the local authorities. It was an extended introduction and it really worked.

And I like the characters, especially Cora. She’s not perfect by any stretch – she’s rough round the edges, she’s road, she drinks too much, she’s hard as nails and as pleasant as sandpaper. She swaggers into town, she’s insulting, arrogant, and virtually dares people to take her on and challenge her. She insists people work her way and if they don’t, she’ll move on – it’s not her hide being eaten by vampires. She is the epitome of a character who will do things her way, live life her way, no matter how objectionable or difficult that way can be. I like her, I want to hear more of her story, I want to follow more of her adventures.

All the characters are presented in this very realistic fashion, with the first story showcasing them. I don’t think any of them are particularly pleasant people, we have cowardly deputies, the harsh, hard drinking, abrasive but honest and good Marshall. The characters are very human with very human flaws and failings – and they’re not, necessarily, nice people or pleasant people. They’re hard people in a hard land doing hard jobs and you can feel that in the depiction.

There were 2 main barriers to me enjoying this book. Firstly, the “authentic” language of the people talking, especially Cora the protagonist. I have no idea about old West dialogue so it could have been authentic. But it didn’t flow for me, the rustic, hokey old, slow speaking was a real barrier to my being immersed and it seemed to make every conversation last way longer than it needed to. I realise this is very much a “your mileage may vary” moment and may also come from the fact that American accents don’t come naturally to me anyway.

The second major barrier was the info dumps. There was a lot of lecturing, a lot of explaining. We have the British monster expert dump his information on Nosferatu. We have Cora lecturing the Marshall and others. We even have the bad guy lecturing his underling. We even have a great big bad guy melodramatic speech to Cora while she’s in his grasp, full on James Bond style. I’m not a fan of infodumping at the best of time, especially when the bad guys get in on the telling rather than showing. But with the accent and the style of conversation as well it dragged out far more – there were arguments and interruptions and tangents and it all delivered in a rather long winded style. I liked the story but found myself broken from it at times when we had these chunks of exposition. Even Cora’s internal monologue tended to be long winded with frequent expositions, recollections, musings, repetitions etc that added a lot of padding.

The plot itself is interesting – it’s a monster hunter plot, taking down the enemy with silver bullets and crosses. At least once you find the right bullets to use and track down where the monsters actually are. For the most part, it’s pretty straight forward, but it’s also great fun with some very nicely described action and thoroughly exciting and satisfying fight scenes. There is a major twist ending and it wasn’t something I saw coming – though there were plenty of hints along the way. It was one of those moments where you look back and think “oh yeah, I can see it now.” I knew something was up and I did find their behaviour odd, but the exact reason for it surprised me. I’d come up with a completely different theory. It’s rare I’m surprised by a book and this one completely caught me – major kudos all round.

Inclusionwise, the book had one minority character – a Mexican deputy we hardly saw and seemed to live up to a lot of stereotypes. There is a mention of the racism of the time period, the injustice and the cruelty and a challenge of it with the Marshal facing down a racist mob, but little in the way of inclusion.

Cora is an excellent character in terms of strength, independence and depth. But the only other women we see are prostitutes who are victims and largely dehumanised. Though one of them is a love interest but clearly it’s an unrequited love and everyone in the town mocks the man for his ill-fated crush on a “whore.”

I really liked this book – primarily for the truly excellent protagonist. I loved this character and would love to read a whole series of her as the main character, though I don’t think this book will be more than a stand alone. I liked the plot and the setting as well as the different monsters and the ways of dealing with them and I think that the monster hunting feature with the wandering vigilante really does fit the feel of the Old West. It was exciting, action packed, had a gritty realness and a truly surprising twist ending which added a lot to the whole book. The only thing making this book a good book rather than an excellent book is that pesky, long winded info dumping.

A copy of this book was received through Netgalley
Posted by Sparky at 12:00 PM