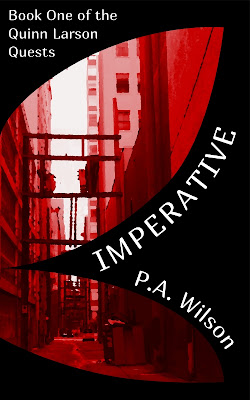 Which means he especially worries when humans start dying. The fairies are killing humans and using their souls to power the Sidhe political struggle, while the Sidhe hold the threat of magical sterility over the fairies to demand their co-operation. As the bodies pile up, there is more chance of humanity noticing the body count – and the subsequent backlash that could cause yet another Real Person extinction and a reduction of all of them.

Of course, the Sidhe are too short sighted to listen to reason and Quinn, as a Spirit Wizard, is oathbound against harm – that leaves him the task to either break the Sidhe’s curse on the fairies or otherwise restore their fertility – aided by Cate a fellow Witch and Olun, a pixie who has been bound to protect humanity.

This book got a lot right for me with the story telling. The pacing was excellent, nicely maintained themes without being distracted or tangented, especially for its style. This is a book where the characters are brainstorming a solution to a problem. It isn’t an action packed battle nor is it a mystery in the sense that they all know what the problem is from the very beginning. But they need to find a solution – one that involves a lot of brainstorming, a lot of trial and error and a lot of planning. It’s a nice change from swashbuckling and action and I quite like that the protagonist Quinn, as a Spirit Mage, is denied violence as a solution anyway. Instead they’ve got to use all the tools and information at their disposal to find a peaceful solution.

The problem is that, since this is a new book of a new series in a brand new world, I’m not entirely sure what all the tools and information at their disposal actually amounts to. This means they just keep pulling out magic tricks we don’t know or understand yet. It does shows us a lot of the wide world and its residents and the limits of the wizards – so it really develops the world building – but this is the problem with Magic users with unknown magic looking to solve a problem – in the end they’re going to pull out a big bottle of Magicus Problemis Soluntionai and solve it. For all that, I’m impressed by how it did keep me engaged while they tried different magical solutions and we did get to see around some of the limits of the wizards, their powers and their world without undue info-dumping.

I had some real problems picturing the protagonist – to such a degree that I actually didn’t realise Quinn was a man until 20% into the book. He grew on me as the book progressed but I found it really hard to truly connect to him – I needed more of him in the book, as a person, as a protagonist, I had none of his history, his hobbies, his life, he had no pets or habits or friends who weren’t useful. I needed something of Quinn as a person to latch on to rather than just Quinn the protagonist, the actor, the one who drives the story. I want to see more of the history of him and how he relates to the world – what actually makes a Wizard a Wizard rather than a normal human? What is his relationship with Olan? (For that matter, what/who is exactly is Olan?) He’s 300 years old – what has he been doing, what does that mean how did he live, what does he do? The vampires were wiped out, what does that mean? What does that mean for humanity and Real People? What did that mean to him? I need some tangible hooks rather than rather coldly stated facts. And there’s no physical description of him – I know it’s a minor thing, but I can’t picture what this guy looks like at all.

It seems odd because these are normally things I like in a book – story focus rather than plot focus and without excessive description, but it’s taken too far the other way and left me with nulls running around where characters should be. It improved and I think Cate is a more realised character than Quinn, even though she was a love interest who was much less involved in the story.

I don’t know if it were because of this issue with the characters, but I didn’t get truly wrapped up in the book. I liked it, I enjoyed it and at no point did I feel the urge to put the book down. I couldn’t happily while away the entire day reading this book without a single break or distraction. This wasn’t one of those books where I’m looking for an excuse to stop reading or where the slightest thing will give me an excuse to put it down. I could glady read for hours without ever putting it down or getting bored. But, equally, if something did interrupt me, it didn’t bother me. I didn’t resent distraction or having to stop reading and I could probably have put the book down and never picked up again and not felt unhappy or like I’m missing something. It amused me, it immersed me, but it didn’t grab me and hold me.

But it did interest me – because the story was well told and the world is broad and interesting. There is a lot here that did hook me into the world and the story. The characters are growing, the scale of the world and the way all its denizens develops really well during the course of the book. There’s a real feel that this is something vast an impressive here that’s going to be well worth exploring.

The book did fall down badly on inclusion of minorities – it simply didn’t have any at all. As far as I can tell everyone is straight, cis and white, and the mythologies drawn upon are largely western European. There is a very strong and interesting female character with Cate, a witch who is capable and strong, in many ways more capable than Quinn which is casually accepted. She was developing as a love interest but it was through some very good paths of mutual attraction, respect and familiarity rather than the usual, problematic tropes we find so often. But in the end, and I’m avoiding spoilers, she follows a very trope laden path that adds little to the story or anything meaningful to the characters that really undermines her as a character for me. To spoil, scroll over the blank spot: She is fridged. She dies and it seems the only reason for her death is to make Quinn sad. End of spoiler.

This book was good, leaning towards the “meh” side of good ( I keep telling myself I liked it, I know I liked it, but looking back I’m still left with a lot of “meh”), but still definitely good – it’s worth buying, it’s worth reading and it’s an interesting evening’s read. Far more so, though, is its potential for a series. This book was decent, but with this foundation, the series promises to be excellent.