Review: Lady of Devices by Shelley Adina. book 1 of the Magnificent Devices Trilogy 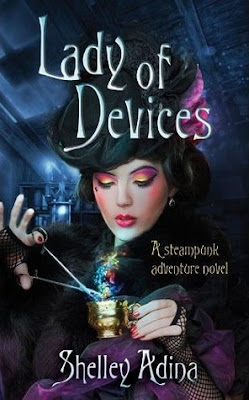 Lady Claire, society daughter is approaching the end of her school career where all the important things a young lady needs to know have been passed on to her. Despite this, she’s also made the effort to actually learn something, much to the frustration of her teachers and certainly to the annoyance of her mother who is viewing the coming season with great anticipation. Education takes a back seat to dress fitting if Claire wishes to achieve the ultimate goal and secure herself a proper husband. Rather than Claire achieving her ultimate goal and go to university.

Of course, such ambitions become far more distant when disaster strikes the family. Impoverished and without her father, Claire sees her mother leave the city and is left to pack things up and join them – and rejoin the quest to find a proper husband.

Independent, with little supervision, Claire pursues her own goal of employment hoping to realise her own potential. But she quickly finds herself in a far worse position than she ever imagined possible – and must now make her way on the poorest streets of London, penniless as the Lady of Devices

Lady Claire is a Victorian society lady, the daughter of a Marquis of considerable wealth and influence. Thuis is a common setting for Steampunk and my first test is always “does this feel right?” I want to be able to open the book and feel the Victoriana, when a new character is introduced, the theem should be so set thaI picture her in a gown, not jeans and a tank top. I want the feel of the time and the place to be so evocative that there’s no doubt to the setting and no need to translate. And I want all that without massive amounts of clumsy info dumping.

This is one of those books that gets it right. Through dialogue, through actions, through carefully described settings, through attitudes and appropriate, non-overdone references we have a great sense of time and place that’s really immersive and fun.

And Claire is a fascinating character – someone who causes explosions in her “chemistry of the kitchen” class simply because the Professor won’t tell her WHY those compounds should not be mixed, she’s not satisfied with “just don’t.” Claire faces two major conflicts, the first – and one I hope will be developed in later books – is the conflict of Wits vs Bloods. The Wits being those who consider intelligence and knowledge to be important and the Bloods who consider breeding and lineage to be what matters. She is from a Blooded family, a family that wouldn’t dream of employment or involvement in such crass activities as science and engineering. Instead finance and politics are for the men, and finding a good husband and running a household are the women’s job.

Claire breaks both moulds – more inclined to value learning, adventure, experience and knowledge than bloodline and breeding and chafing against extreme gender expectations that require her to be decorous enough to find a husband – the all consuming goal that so obsesses her mother. Any other achievements are moot, her language skills are to be useful for ordering around foreign staff, her engineering and scientific knowledge trifling distractions at best.

After her family’s financial collapse, Lady Claire finds herself on the streets of London among the very poorest in Victorian society. While there, we quickly see the blatant difference between the “haves” and the “have nots” and just how little people have to survive on when she lived a life of such extreme privilege. The come down is extreme, to say the least.

And, with her new companions, we can also see how many advantages Lady Claire has – not just in terms of assets but in terms of upbringing. Merely speaking a certain way, dressing a certain way means she is much better treated and, because of that, given greater opportunities and greater lee-way. The same applies to education, here knowledge not just her precocious and unusual knowledge of chemistry and engineering (which, despite the title of the book, is a relatively minor element of the story) but simply being able to read and write and to have mastered basic maths makes such a difference. It’s a telling examination of class not just in terms of who has what or even in terms of how well people are treated – but also in terms of the basic advantages that education and upbringing can bring.

But it’s also a little simplistic, to say the least, sunnily optimistic. This is a feel good story and that is what we get. Acting as Professor Henry Higgins with a gang of Eliza Doolittles, she quickly educates and informs her gang, introducing them to gambling which they’re wildly successful at in the various establishments, bringing in an income on which she builds her enterprise – bringing gangs together, bringing in the homeless urchins, bringing them education, food and a place to stay.

Because it was so successful and easy she never adequately challenges her initial disapproval of their resorting to stealing to eat. Right until the end of the book she is ashamed that she ate a slice of bread that is stolen without ever truly acknowledging, realising or accepting that the gang of children she had fallen in with had no choice but to steal or starve. She never really loses or even tempers her judgement of their thievery. Nor, for that matter, does she adjust her opinion of their clothing, behaviour or language and, rather than accepting these children as who they are from their circumstances, sets out to Henry Higgins them from the very first meeting. She doesn’t get challenged or grow as a character and her views aren’t substantially changed because her eyes aren’t opened, she doesn’t face a great deal of earth-shattering conflict and things smoothly – and almost magically – resolve themselves in a satisfactory manner.

It’s fluffy, it’s fun, it’s nice, it’s sweet and I really enjoyed it – but it was too easy and contained too little conflict. After she’s established in the building after, luckily, defeating a thief on the second night of homelessness the worst thing that happens to Lady Claire is meeting some old high society associates in the Crystal Palace who try to embarrass her. There’s not a lot more conflict. She brings gangs together with relative ease. She establishes near complete authority over all her charges with nary a blink or more than a couple of hesitations. It’s just so easy – this path from utter poverty to (relative) prosperity is so very very smooth. Given the short lengthy of the book, more could have been added here, I think.

On the subject of length, the ending also felt rather abrupt. She was putting things together then suddenly weeks pass and she’s now got a thriving enterprise, going to the Crystal Palace, meeting old friends and setting off into a whole new chapter of her life. It caught me by surprise, we were happily chopping along at an excellent pace for most of the book, everything explained and fleshed out, themes maintained without becoming boring then suddenly we make this massive sprint for the finish line. I found myself wondering whether the author on a deadline.

I think the short length may also have prevented a fuller discussion of class, gender roles and the Wits vs Bloods conflict which were all touched on, but not in the depth the book suggested. There were also no minorities at all.

Ultimately, this is a book that makes you go “awwwww” and maybe smile in a slightly sappy way and then look around, faintly embarrassed in case anyone saw you. It’s sweet, it’s fun, it’s rather twee and it’s, perhaps, not very realistic or even likely, but it’s nice and it’s fluffy and sometimes we need a little feel-good twee.