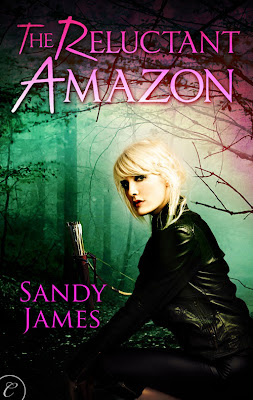 Rebecca is a sensible woman, a teacher and she’s about to get married. Or was, anyway, until her husband got cold feet at the altar and a strange Scotsman showed up in the humiliating aftermath to whisk her away to a new life.

With barely time to adapt, Rebecca finds that she’s an Amazon, empowered by the Amazon’s patron goddesses with the power of Earth and chosen to defend the world against various supernatural threats. More urgently, she also learns she has been tapped because the last generation of Amazons has gone missing – or died.

Rebecca must struggle to learn the fighting skills that are essential to her role – but quickly finds she is not as physically adept as her sisters nor as fast a learner. But with Amazons to find and the undead to fight, she doesn’t have time to learn slowly.

And even that is complicated by her teacher, Artair the sentinel, who is compelling to her in ways that go beyond being  teacher.

There was a lot of really excellent potential in this book. Yes, 4 warriors dedicated to the 4 elements has been done before, but there was a lot of unique twists to it, with each elements having powers above and beyond what you’d expect. The idea of demigods being evil beings who have the ambition to rise to become gods no matter what is intriguing as well as the various monsters and spirits that serve them and the gods who oppose them

It’s well written as well. The pacing is tight and regular, keeping the plot moving and not dwelling or getting bogged down anywhere but nor did it rush through things and leave it vague or hurried. The world building balance was also excellent. Often with a supernatural setting it is far too tempting to dump all of this wonderful world you’ve created onto the page whether the reader needs to know or not – and it really bogs down a story. This only ever gave us the knowledge we needed to understand the story, explaining what was necessary and leaving the rest as intriguing clues. But, despite that, the world building felt sparse.

The world building felt sparse because it gave us just enough to understand without giving us irrelevant information. Sound like a contradiction? Well, the amazons have these powers, the gods these roles and this presence, but we didn’t get a story about them. We got a story about Becca and Artair falling in love. About Becca worrying she wasn’t becoming a good warrior fast enough. About Artair thinking Becca was sexy but wanting to quit as Sentinel. Of Becca thinking Artair is sexy and wishing he wouldn’t go.

In other words, there’s this wonderful world and wonderful pacing and an admirable restraint against drowning us in unnecessary information, and it isn’t really used.

I also admit to being a mythology geek, so when I saw “Amazon” I was excited. I could see these powerful, strong, independent warrior women facing down their enemies with brutal power.

I did not expect Artair’s Angels. Harsh? Perhaps, and part of that could be due to my expectations when the word “Amazon” is raised – but I don’t expect a book about Amazons to include a man who is their leader, their trainer, their drill sergeant, paternal figure, probably their best fighter, their general and battle leader or the main love interest in the story. I would have thought at least some of these roles would be filled by women.

Artair, the immortal Sentinel, is the backbone and leader of the amazons. Yes, there’s the goddesses, but they’re hardly around. He is the one who trains them and leads them, he is the one who sets the rules in Avalon, he is the one in control – and the story is, primarily, a romance between Artair and Becca meaning that this story about Amazons is primarily a story of a man in charge and a heterosexual love story.

Ok, I’m not going to criticise too harshly simply because it didn’t meet my mythological expectations, but I didn’t like Artair at all – and not just because of his accent (I’m not a fan of typed accents and his was unbelievably strong).

Artair is the boss, no question at all – and he’s extremely paternal and seems to treat the Amazons almost like children. This even stretches to the new Sentinel, who seems to be a child of the modern age so doesn’t even have immortality as an excuse, and they both indulgently tolerate “amazon mischief”. To some extent, you expect some of that in regards to the women he’s training – but even his treatment of Sparks, a woman who is about 90 years old and an experience Amazon, is disdainful. He refuses to let her have cigarettes, making that decision for her. At one point he’s tempted to manhandle Sparks and “scare some respect” into her – and decides against it because it would be ineffective, not because it would be wrong.

Which, in turn, makes the relationship between him and Becca fraught – and not just because of the standard “I’ve just seen you and think you’re hot we’re now in love forever!” trope. Firstly, it’s repeatedly mentioned that Artair loves Becca because she’s different from other Amazons – she’s sweet and gentle and weepy and delicate. That isn’t necessarily bad if it weren’t also combined by his disrespect and controlling nature – because it looks like he prefers women he can dominate. Similarly, the fact he’s her drill sergeant and has to push her in training, using harsh words, rough sparring that leaves her bruised and outright near breaking her with humiliation  could be explained by training needs – but adds a whole abusive feel to their relationship.

Which begins pretty abusively – aside from the “come with me now if you want to live” kidnapping that starts her Amazonhood then he threatens to “shake you ‘til your teeth rattle”. When she refuses to take her dress off he cuts it off, slapping her backside when she yells “I won’t let you touch me! Don’t touch me!”. And his behaviour isn’t limited to Becca – when Megan questions why she’s been uprooted from her old life to live in rustic cabins he “backed Megan up against a tree and proceeded to bellow at her until it made both Sparks and Rebecca cringe.. After that, Megan had enjoyed hours of moving heavy rocks from oen end of the compound to another.” Our hero, folks. Later he watches her without her knowing while she strips for a bath. He’s also extremely presumptuous – when they sleep together, Artair assumes she’ll be moving into his cabin and has her stuff moved. He doesn’t ask, she never actually agrees to this (she doesn’t disagree either – Artair just makes the decision and she obeys). He even has her recite a wedding oath without her realising what it is – and then he, and the goddess Rhiannon, consider them married. It’s probably no surprise at this point that his endearment for Rebecca is “Becca Mine” and he uses it long before they’re in a relationship.

And let’s talk about Rhiannon, one of the four Goddesses, patron of Earth – who hates Becca. Because she’s jealous because Artair is her man and she wants him! Never mind she’s supposed to be Becca’s patron goddess in her battle to save the other amazons and the world – bitterness and spite is the name of the day. Unfortunately, that same pettiness characterises her interaction with Frejya, the Fire Goddess as well. It’s a shame that our representation of female power – the only power that can be above the Sentinels – shows pettiness and jealousy.

There are 2 more goddesses – Ix Chel and Ganga, but we don’t see them often, they usually only show up for the word “exotic” to be used. I’m afraid it’s used a lot – also to reference Sarita, the only POC Amazon who is also a very minor character. The way they’re described screams other.

There’s also a lot of heavy “the point of a woman is to make babies!” with the fertility of the amazons not just presented as important – but the most important things about them and even, and I quote, “all that made them women.”

There are no GBLT people in this book – but Sparks threatens Becca with violence for suggesting she may be a lesbian.

This book had a lot of potential. It had vast potential. It has a really interesting world with a full cast of gods from various mythologies, some kind of dark magic that seems to be intriguing and I’d love to see it explored. The amazons, with their various elements are an interesting fighting force (not an original one, of course, but interesting still) that I’d very much have liked to see this developed on to the next stage. The writing is very good – it’s well paced, it perfectly balances the scale between enough information to keep you interested and informed without dumping so much that it becomes a slog or boring. But none of this was developed, none of it was used or developed because the story being told wasn’t an adventure with all these elements – it was a romance with 2 people I didn’t care much about getting it on. And in the middle of it was slapped Artair the Alpha Male – who I really didn’t like.

A copy of this book was provided for review through Netgalley
Posted by Sparky at 3:00 PM