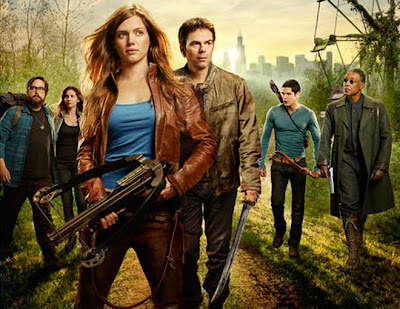 Revolution is like many other dystopian fantasies.  Once again, we have White man saves the world with people of colour in servant roles when they do appear and of course, the invisible gay canaries. By that I mean no gay people, because somehow they are always the first ones to die when the world ends. With the strong White male leader, normally we get a heavy dose of hyper masculinity and the viewer is expected to accept the rightness of an alpha male leader and embrace it. Consider for a moment Rick from The Walking Dead, and Tom Mason in Falling Skies. These two men both fit the mold for leadership that we have come to expect in a dystopian setting. Revolution takes the mold and expands upon it to make hyper masculinity not only the preserve of leadership but a necessary attribute of masculinity.

From the moment we meet Captain Tom Neville, he is savage and, in fact, a sadist.  He rides into Ben’s small community with armed men and demands instant surrender on behalf of the militia. Tom uses violence and fear to keep his troops in line and the only person he seems to fear is Monroe. In episode five, for the first time we get a little insight into Neville’s backstory. We learn that Neville used to work as an insurance adjustor and lost his job when he gave clients coverage for a fire that they hadn’t actually paid for. In his boss's office, he was passive and his body language was absolutely submissive, when he was fired. When Neville returns home, he tries to ask Rob, his neighbour to keep the noise level to a minimum but is ignored. Instead of being active and pursuing a confrontation in both instances, Neville enters his home and starts to take his frustrations out on a punching bag. He tells his son, Jason, that it’s good to punch but he must never punch people.This pre blackout Neville bears absolutely no resemblance to the tough captain we have learned to be wary of. When Tom breaks into his house looking for supplies, Neville beats him to death with his bare hands and in this moment, Captain Tom Neville is born. It’s not simply a case of the strong survive but a case that this is the appropriate behaviour for a real man. For Neville, a man protects his family, and a man shows power and does not back down. He has learned that a passive masculinity has dire repercussions and strips a man of his self worth.

Passive masculinity is also represented by Aaron.  Pre black out, Aaron was an extremely powerful man - not because of his physical strength but for his wealth. Though he was beat up in the school yard as a child, for Aaron, revenge came in the form of a company with 300 employees, four homes and a private plane.  In episode three,  he expresses to Maggie the fear he feels in the world as it is today because the same type of people who bullied him in the school yard, are in power today. He calls it a joke, but clearly the loss of power and value as a man is something that haunts Aaron.  He is desperate to get the power turned back on in the hope of returning to some semblance of the former power structure.  Men like Aaron are dependent upon others for safety and he is barely functional with a weapon. His character exists often as comic relief on the show.

Ben Matheson is another story of the failed passive man, a man moved more by compassion and understanding than violence and aggression. In the very first episode Ben is killed trying to placate the soldiers of the militia. Even had Danny listened to him and put the crossbow down, Ben would have been taken prisoner - we learn from Charlie’s rant in No Quarter, that the militia had repeatedly come to their farm and demanded resources, children, women - and every time Ben had given them up. Even beyond being killed almost as soon as the show began, when we see Ben in flashbacks we again see his passivity as a bad thing - in Chained Heat we see his wife, Rachel, killing to defend their meager supplies, while Ben was willing to let them go and risk starvation. His passivity, his compassion would have hampered his family's ability to survive.

I know that we have, in the past, criticised Charlie for being so naive in a harsh dystopian world. In a world where the power is out, order has dissolved and they live in such a harsh, brutal regime, Charlie is ridiculously squeamish; she does expect things to be too neat and gentle and good and she is overly outraged by the harshness around her. Her refusal to tolerate the death of their enemies has often caused them problems - with bounty hunters and militia free to follow them and put them all at risk. Greater aggression, lower levels of compassion are an asset for everyone in a dystopia like this, surely?

Yet, while we, as watchers, are deeply frustrated by Charlie’s naivety, the show is not presenting it as a major disadvantage or even a flaw. If anything, it’s presented as laudable - with Charlie’s willingness to kill to save slaves making her a much better person than Miles’s because of his willingness to kill to survive. When she spares Nate’s life - an act of extreme naivety - it pays off in the end with him saving her life in Soul Train. Her compassion is an asset. When she is finally shown to be hardening, becoming less compassionate at the end of Soul Train,  this is treated as something regrettable - even tragic. Her lost compassion is something to mourn.

Compare that with her brother Danny and his saving Captain Neville’s life. He goes out of his way to compassionately save the Captain, the result of which is that he is again captured and suffers continued abuse. Danny’s compassion is a weakness, his growing hardness something that is past time coming and to be celebrated.

If nothing else, Captain Neville’s own story, as mentioned above, shows that this encouragement of aggression and punishment of compassion in the male characters also applies to before the lights went out, before the dystopia. While it was, ultimately, the dystopian that hardened Neville, his passive, accommodating nature was presented as having always been a weakness and a flaw, no matter the situation.

We cannot blame this praising aggression and contempt for compassion in the male characters on the dystopia alone. There is a marked difference between how female compassion and male compassion is presented on this show and at no time is male compassion or passivity - even before the dystopia - considered a laudable or powerful trait. The strong men, the effective men, the men we’re supposed be impressed by are all aggressive, dangerous, callous and violent. Those who are not are punished, killed, exploited or weak.