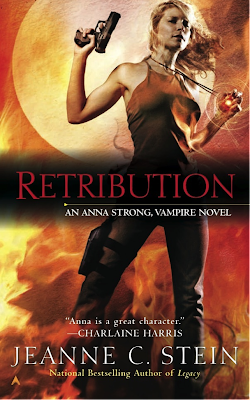 Things have settled into a level of calm for Anna.  Her family is living in France on a winery they believe that they have inherited. Her partner David is on vacation and has finally separated from Gloria, the woman she hates and her vampire boyfriend is a model. As much as Anna misses her family she is relaxed and rebuilding a life for herself.

Anna gets a call from Culebra the shapshifter and is told to stay away from Beso de la Muerte because Sandra is going to be there and she has not gotten over the fact that Anna killed her lover.  True to form, Anna goes straight there.  Anna is nothing but predictable and this is why Culebra told her to stay away, in order to ensure that she would meet Williams there.  Though Williams is no longer the police chief he still has connections and he wants Anna to investigate the death of young vampires.  He is worried that these deaths will bring attention the community does not need. Anna however is not drawn into the investigation until Culebra ends up in a psychic coma cased by an old foe - Belinda Burke.  In the process of tying to help him Fray gets drawn in and his life is also in danger.  With the clock ticking down, Anna has to find a way to stop Burke for good.

As with all of the other books in this series, there is little GLBT inclusion. Anna does end up having sex with a woman in a blood exchange but it is something she is embarrassed and ashamed of. It reads more like the magic of the exchange made her do it.  It is something that is certainly sexually one sided and done simply as payment for human blood.  Sandra, the lesbian werewolf we met in Legacy, is briefly in the novel, but is of course now grieving since her lover was killed in the last book.  Heaven forbid there be sex between people of the same gender without shame and a functioning same sex couple where neither partner dies.

The only two characters of colour are Ortiz and Culebra who spends most of the book in a coma.  Ortiz who has done little but play the role of servant for Williams ends up dead and this brings his hatred of Anna to a new level because despite what she says, Williams believes that Anna could have saved him if she only believed that she is the chosen one. For the first time ever, we actually learn a little bit about Ortiz and this rounds out his character a little bit but it pales in comparison to how much we have learned about the other characters.  His death is little more than a plot device to elevate the tension between Williams and Anna and in this way, he becomes the ultimate servant. To seal the deal we end up with Culebra pledging to give Anna anything she wants because she saved his life.  What bound them before this was an interesting friendship and what remains is now nothing more than a master/slave relationship.


Anna has been told repeatedly that there is something special about her and yet she never deigns to ask what that means. She would rather bury her head in the sand and pretend that she is human than deal with the realities of her existence.  Anna takes being an ostrich to a brand new level and it is beyond annoying.  Considering that this is book five already, I think Stein should have revealed what the deal is with Anna.  There is building up anticipation in a reader and then there is a long winded tale - Stein falls into the latter. At least let Anna find out what is and then make the decision to run screaming if she has to. The idea that because she doesn't trust Williams that she doesn't need to know is ridiculous.

Thankfully, in Retribution, Gloria has a tiny role to play so the reduction of bickering between women was largely reduced.  This was a nice change in the story and for once conversations between women were not about men, they were about dealing with the issue at hand. Anna still does not have any female friends but I hope that this is something which will change in the books to comes.

The most interesting character in this book was Deveraux.  He's a vampire spirit caught in the body of a witch.  The mixing of two characters in one body could have been extremely awkward but Stein made it compelling.  I can only hope that Deveraux will make an appearance in later books. To be honest, he seems a lot more interesting and smarter than Anna, but then, that's not really hard, though Anna is supposedly the chosen one.

Retribution is mediocre and though that sounds harsh, I think it's an improvement on the last few books in the series.  A lot of the problem is that Stein does not advance the series and instead sends Anna out on yet another mission to save the world because of course, she is the chosen one (though we have no idea what the hell that means). The antagonism between Anna and Williams is getting old fast and it is time to resolve the situation or give us a plausible reason for its continuance. As a reader, what I want now is answers, but considering that Stein took five books to get to this point, I have a feeling that they will slowly dribble out, if we are given any at all. In the end Retribution calls to mind the phrase, shit or get off the pot.